Usted está aquí: Inicio / About ICOS / What are the Airdrops and Bounties 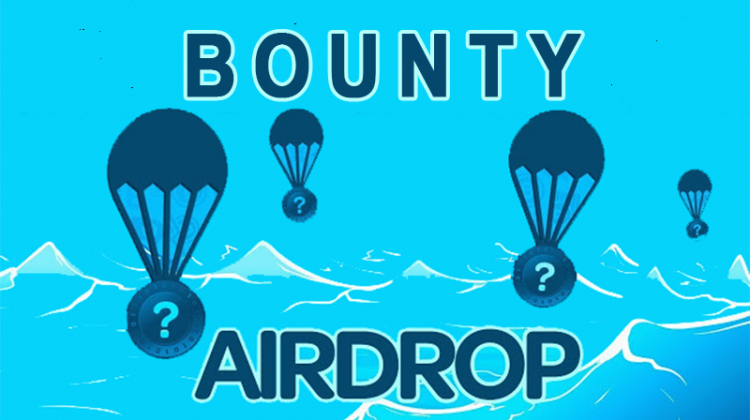 One of the key elements of any ICO is the inclusion of an Airdrop or Bounty of the token being offered for sale. If you are a beginner in this world, you will surely believe that the cryptocurrency market is a scam precisely because there are Airdrops and Bounties. But, do not worry, you are not the only one who believes so. Many people say: “who does well by giving money away?” but the reality is that giving tokens away through these processes is something very well thought out and here we will explain you why.

What is an Airdrop or a Bounty carried out for?

The first thing to be aware of is that this is an advertising strategy already proven in the traditional market. The purpose of these advertising programs is to promote a new token in the market in order to achieve a future appreciation.

How to appreciate a currency that is being given away? It is safer for people to value a currency that they already hold instead of one that they do not hold and does not have any kind of connection. In addition, a token holder is a walking advertisement that can contribute a lot to the project.

Another important point is that these tools allow a greater internationalization and global growth of the project. As a general rule, Airdrops and Bounties, are not limited to any specific region, allowing people from anywhere in the world to obtain these tokens.

In fact, both investors and sponsors of the project pine for this international growth of the token since it greatly helps the valuation of the asset because it is introduced in more markets and becomes more dynamic.

Are Bounty Programs the same as Airdrop Programs?

These programs try to give tokens in a controlled way (it is always in a controlled way) to a group of people who meet certain previously established requirements. Users are not required to do any important task or activity to receive the gift tokens, only to meet the requirements (which can be about their nationality, region or any other).

Lately, an Airdrop method has become popular and consists of randomly giving tokens to people. That is, tokens are given to people who have not even requested them. The purpose of this method is to awaken people’s curiosity and make people speak about the token within their communities or with their friends. This is a method has been successful since it manages to create a trend within society; although it also has its detractors who say that this is throwing money away.

ICOs that need more exposure in the market generally use these programs to make themselves known. The Bounty or Reward Program is intended to offer tokens to users in exchange for them doing a specific activity or task. The activities can vary a lot and will depend on what the ICO or the cryptocurrency needs to grow in the market.

There are projects that demand users to post about to the cryptocurrency world in social networks or in forums. Others ask them to test their MVP and search for errors, and there are others that only ask the person to register and provide their email to receive more information about the project

Today, many people have become “Influencers” in the cryptocurrency market and are taking advantage of the Bounty Programs to obtain profits from advertising and comments on social networks or specialized webpages. These posts have a great impact on the market since they draw the investors’ attention, which is what sponsors and project developers know and want.

There are also projects that prefer a more natural diffusion among users who are not “influencers” within the market. Many believe that ordinary users are more credible among their friends and acquaintances and that this helps a better token adoption. It is a question of marketing that we can evaluate among the different existing ICO projects.

What should we evaluate as investors?

Both the Bounty and the Airdrop programs must be evaluated before making an investment in an ICO. We are going to describe some of the elements that we recommend to evaluate and why.

Apart from the fact that it is marketing, these programs pump tokens into the market completely free of charge; that is, without any economic contribution that supports their introduction to the market.

Owing to this obvious situation, the number of tokens being given away must be controlled. For example, many experts consider that a project that is giving away an equivalent of more than 4% of the total tokens is dangerous.

But, why would it be dangerous? The answer is simple: with a distribution above that indicated, an offer-demand disproportionality of the token would be generated which would negatively affect the valuation of the asset.

In the event that the ICO uses a Bounty or Reward Program, we need to assess what the project is demanding in exchange of delivering the tokens. Normally, there is no major problem with this, but we must be careful if they are running spam campaigns because they can create a very negative image in the market.

There are projects that prefer to deliver tokens to a limited number of people “Influencers” while there are others that bet on expansion and prefer to deliver them in a more widespread way. As investors, we must also evaluate this to gain insight of the level of growth that the project may have in the future.

The implementation of KYC and AML policies have been more incisive in the last ICOs launched to market because the financial authorities of different countries have put their eyes on this and many projects prefer to apply them to avoid problems.

The Airdrop and Bounties Programmes have to apply these policies, at least in theory. These policies are intended to prevent fraud and fraud and to prevent tokens from falling into the wrong hands, which in the long run will damage the project in question.