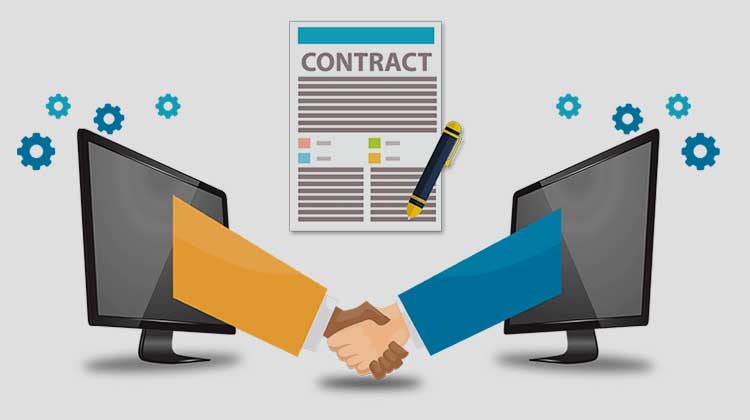 We are all familiar with the meaning of the word contract, which is an agreement between two or more parties by which they agree to comply with certain conditions.

The conditions of a conventional contract and a smart contract are usually the same: the voluntary consent of all the parties, the purpose of the contract (good or service), and a fair, true and lawful cause.

So, what are Smart Contracts?

The most striking peculiarity of smart contracts is that they are capable of “self-executing”, which means they have the property to be automatically fulfilled.

They are written with a code language, usually in a high-level programming language called: Solidity.

Solidity is designed and compiled in bytecode with which the terms of these contracts are created and developed, which will then be executed in Ethereum.

Once the requirements or conditions to be attributed to the contract have been programmed, its compliance is mandatory. As a “law of cause and effect”, a satisfied requirement will automatically cause a previously-established consequence.

All without the need for intermediaries, without being subject to interpretations of any of the parties.

It is a firm compliance contract, governed only by a computer system specially programmed for said action, which makes contracts safe and thrifty in time and management costs.

How are Smart contracts applied in an ICO?

In the case of transactions related to ICO, these contracts are made up of a set of codes with an associated database.

The code is the one that will give the implicit quality, property or behavior to the token, and the database is basically a table with rows and columns that will determine who has how many chips.

Now, we would explain it in the following few words:

The Ethereum platform allows the creation of new tokens under its ERC-20 standard, to which developers can assign the qualities or parameters they wish, and which will be sold and exchanged into Ethers or Bitcoins, with which they will finance their project.

Therefore, when an investor decides to purchase “X” amount of tokens during the ICO campaign, the system will automatically make the transaction awarding to that party (the investor) the required tokens and to the other party (the developers) the amount of cryptocurrencies agreed for said purchase, making a transaction that will be recorded in the blockchain record and that has been executed under the terms of the smart contract created for that purpose.

What is the legal status of Smart contracts?

Like everything related to the blockchain technology, there is still no proper regulation within the legal framework. However, even when it does not have any trusted intermediary, such as a notary public, compliance with the terms is undoubtedly assured by the computer program, always supported by the practically infallible blockchain system.

Just like the blockchain system, and because an inherent relationship exists, countless uses for smart contracts are foreseen besides the areas in which they are currently used.

For example, in financial, health, intellectual property, energy services, and even in government areas.

Some people predict that smart contracts will be used in practically all transactions in our daily lives.