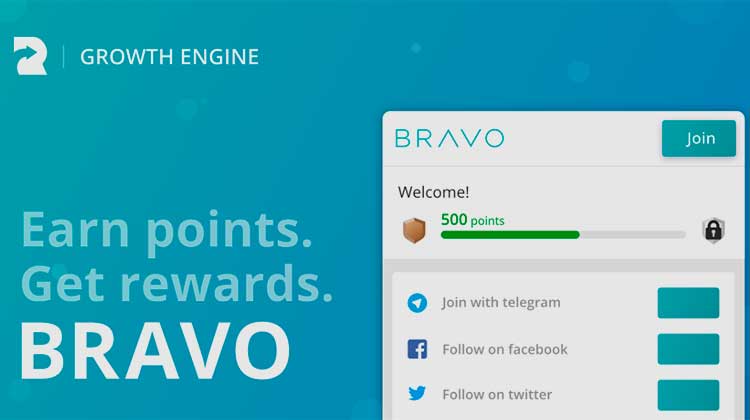 The BRAVO Pay ICO is distributing a total of 10 million tokens on AirDrops involving user activities. To launch this AirDrop, Bravo has partnered with Refereum to implement a growth engine (GE) that will provide rewards to users who advertise BRAVO’s ICO.

Registering to start earning tokens is very simple. The Growth Engine Widget is on the ICO Bravo website and allows anyone to easily register and start earning points to get more tokens with this.

1. Login to bvo.trybravo.com Bravopay and register with your email address.

3. Look for BRAVO’s social networks and follow them. If you stay dynamic on the networks you can get more points.

4. Once you are registered, they will send you a reference code to invite your contacts. As expressed by the developers, referrals is how you get the most points. That would be 200 points for each person referred.

Dynamics of the points Airdrop BRAVOPay 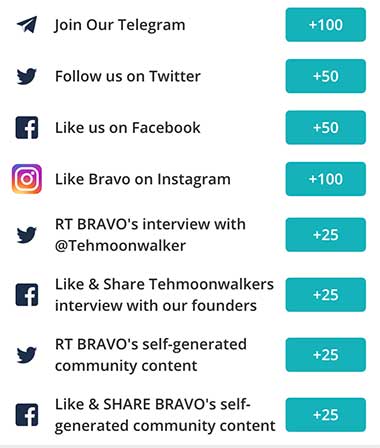 At the Bronze level, a maximum of 20,000 members will be accommodated, while at the Diamond level, only the 100 most influential and dynamic members of AirDrop will be accommodated. As there are fewer members in the higher level groups, there is an incentive to belong to them since this way more tokens will be obtained.

What is Bravo Pay?

BRAVO Pay is an ICO that already has a functional business with thousands of users all over the world. The application can be downloaded now in iOS and Android and with it you can make transactions secure, anonymous and instant. Bravo is now applying Blockchain technology to make the application compatible with crypto currencies.

Although the application is running in a beta version, it has already been able to process millions of dollars in fiduciary transactions with thousands of users spread mainly in the United States. In the Roadmap of the project we could see that the company is seeking to implement the stage of market expansion through the introduction of Blockchain technology within its operation.

The Virtual Wallet that you must place at the time of registration must be your own Wallet and that is compatible with the Ethereum Cards that accept the ERC-20 standard. This element is very important not to let pass.

Before you participate, check the disclaimers section of  BRAVO Pay to see if you are part of the countries that allow BRAVO Pay to operate.