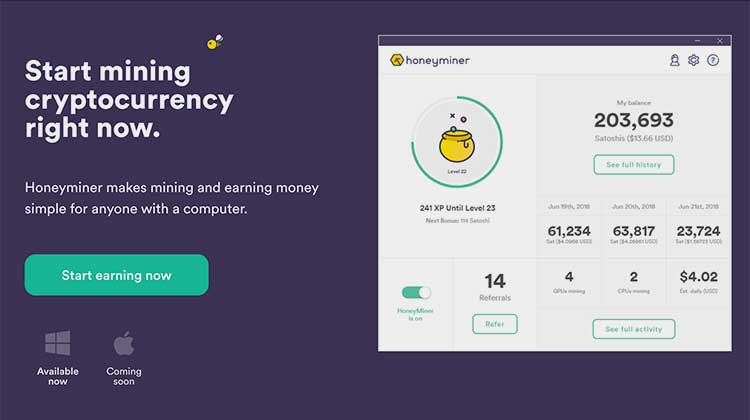 The mining of cryptocoins is not an easy task and in many cases turns out to be even demotivating. You need to buy a really powerful and expensive machine and then see that the return on investment is very slow or in some cases never arrives. In addition, the issue is not only to connect the machine to the network and already, you also need some basic computer skills to configure everything, as well as know about the market to mine the most profitable currency. In conclusion, back to the beginning, this is not an easy job.

The change proposed by Honeyminer

Faced with this situation, last June came, Stax Digital LLC, Honeyminer, an application for desktop computers with Windows operating system that allows mining to be profitable using a simple computer like the ones that have the vast majority. How will you achieve this? People who install the application will be allowed to join a network of people with similar computers so that together they have a higher computing power than an exclusive mining machine.

As a profitable business, Honeyminer will take a percentage of the profits generated by the miner. This percentage will vary depending on the quality of the connected hardware, for people who have a single GPU (graphics processing unit) connected is set between 8% and 2.5%.

How much can I earn?

With respect to this point, developers do not give a fixed number to ensure the earnings that people who connect their computers can have. Depending on what you see on the website, a computer with a high-level graphics card can earn up to $2 per day. They also claim that newer computers can earn between $1 and $3 a day.

The person who installs the application on their computer does not need to be aware of market variations as Honeyminer will constantly be looking for the most profitable currency before opting for any particular one. However, no matter what currency is being mined, all profits are converted to Bitcoin and it is with that currency that the user who has lent his computing power is paid.

For now this application is intended for people who are not experts in the area of mining but the developers also want to offer a system for professional miners and have announced that they are working on Honeyminer Pro to reach this target.

The application has had a great impact on the community of cryptocoins, even arousing the interest of people totally outside the crypto world. Due to a publication that Coindesk dedicated to the platform, they reported such a large number of users that the platform became saturated, causing hundreds of people to write to Honeyminer’s Twitter account to look for explanations.

The developers did not expect such a large adoption as they have had and have insisted that they are working hard to achieve successful scalability within their platform.