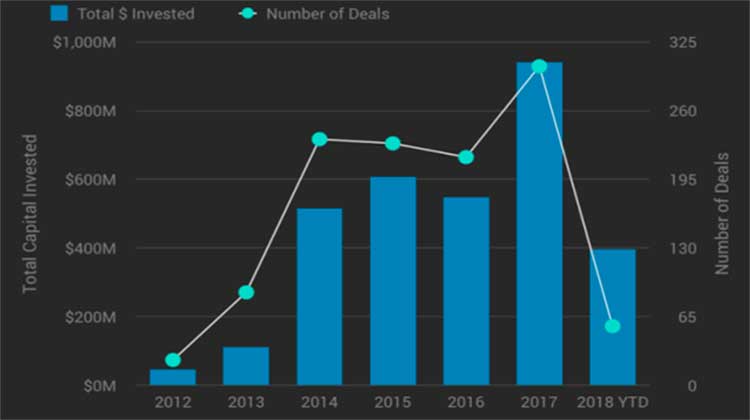 According to a study carried out by the strategy and consulting division of PWC, Strategy & Crytpo Valley Association, in the first 5 months of the year 13,700 million dollars were raised among 537 ICOs that have come to market in that period of time.

These numbers are really impressive if we compare them with the 7 billion that were obtained in 2017. And we still need to observe how the behavior will be in the coming days since everything seems to indicate that the bullish indicator in investments in ICO, will continue.

In Switzerland today, what is known as the “Crypto Valley” has been erected in the canton of Zug. This has generated a large number of projects and ICO´s are established in this locality, in fact, Ubex, a project that we have already analyzed, has its headquarters in this place.

The decision of companies and developers to locate in Switzerland is due to all its legal regulation for financial issues. Issues such as bank secrecy, account protection and Swiss neutrality generate a lot of confidence for Blockchain developers to see this territory as a place to focus their cryptographic business.

Not only Switzerland is taking the lead with regard to the locations where companies choose to set up locations such as Malta, Liechtenstein and Gibraltar have also attracted the attention of developers to raise their projects in these places. It is to be expected that these sites will become popular due to their low tax policies and their facilities for the financial openness needed for the development of ICOs.

The boom and the global dispersion of the ICOs are due in the first place to the fact that the first impressions of the ICOs in 2017 were really very positive and in addition, the market has already matured in important legal and financial aspects that have created a climate of greater confidence for investors and the general public.

Traditional methods together with the ICO model

This growth has not only impacted the market related to crypto currencies but also companies in other sectors have raised the possibility of having a hybrid collection model in which financing with risk capital is mixed with the sale of tokens through the ICO.

For finance experts, this union could bring the best of both systems to provide real growth for star-ups and companies that want to develop ambitious projects within their sectors.