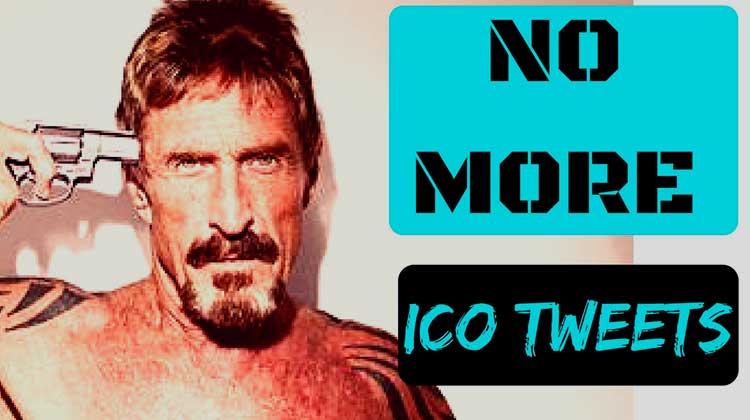 However, in a tweet posted on June 19 on his own account, John announced that due to “SEC threats” he will no longer work or recommend investing more ICOs. He also warned that those who work with ICOs will be arrested by U.S. authorities.

“Due to SEC threats, I am no longer working with ICOs nor am I recommending them, and those doing ICOs can all look forward to arrest. It is unjust but it is reality. I am writing an article on an equivalent alternative to ICOs which the SEC cannot touch. Please have Patience.”

The cybersecurity expert did not hesitate to declare that the situation is “unfair” but that this is the reality. In addition, he stated that he is working on an alternative to ICOs that is outside the jurisdiction of the SEC and therefore the commission will not be able to touch it in any way.

SEC position on the matter

On the alleged threats, the SEC has communicated absolutely nothing, thus ignoring whether or not it is true what John said. However, the SEC has pronounced on previous occasions on ICOs and on how they should be regulated.

On April 30 of this year, Robert Jackson, commissioner of the U.S. Securities and Exchange Commission, stressed that it is necessary to establish consumer protection against the ICOs that exist in the market.

In the commissioner’s view, consumers today have difficulty determining when an ICO is a serious project and when it is a fraud. He also stated that the SEC has been checking the cryptomarket and has observed elements that are very worrying and harmful to investors.

However, the commissioner clarified that these SEC observations will not lead to market bans but will be focused on protecting investors from scams and frauds that cause losses of their capital.

This position differs slightly from the one taken by the SEC in February during its meeting with the Commodities Futures Trading Commission. There he stated that the ICOs would need further regulation.

Also, in May, the SEC launched a fake Initial Coin Offer (ICO) website to serve as a warning to investors, this website is HoweyCoins

The SEC showed that the fake page had all the classic elements used by fraudulent ICO´s. They demonstrated a very positive investment opportunity together with a very diffuse whitepaper while promising a very high profit in a short time.

If the investor falls into the trap and asks to invest in the ICO, he is directed to Investor.gov, a page created by the US government to advise investors on how to avoid scams and fraud.

Do U.S. regulations affect all ICOs in the market?

First of all, it must be made clear that the regulations made by the SEC will only be applied within the jurisdiction of the United States. This means that it will affect both investors and developers of ICO´s who are established within the U.S. territory or have some kind of legal relationship with the United States.

This, despite not having a direct impact on the world market, leaves important side effects for the rest of the markets due to the size of the US market. Likewise, if there are strict regulations by the SEC for the ICOs, a state of alarm would be generated for the rest of the countries of the world as well as for the developers and promoters of ICOs, both for those who are planning frauds and for those who are consolidated within the market.