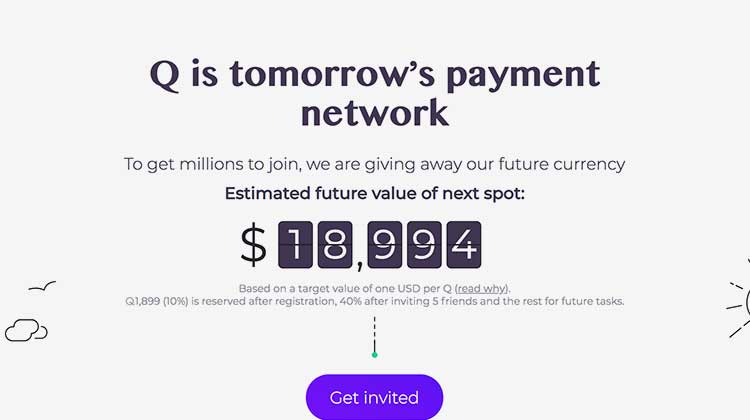 The name of the Q Initiative has been increasingly present in the cryptocurrencies and Blockchain forums. By attracting people with free Q coins in exchange for giving their name and email, this project has spread its message across much of the world, but what is the Q Initiative about?

What is the Q Initiative?

In Todoicos we wanted to investigate more about this alleged project created by former employees of PayPal (despite that mention, nowhere on the page mention names or details of the people behind the project) and is presented as the next generation of payments in the world. We started the research on the official project page, where they first show us the “7 steps to create a global currency”.

In summary, these 7 steps explain that the Q currency will build a more efficient payment system than the current one and that it will “somehow” get buyers and sellers to adopt it. They do not explain how they will achieve this massive adoption, but they are sure that with this use, the currency will have a very high capitalization given its popularity.

So far we see very little information but the reality is that this is all that is shown in the foreground of the official Q Initiative page. It’s notorious that the site devotes more space and effort to getting people to leave their emails to receive the coins rather than explaining in depth what the project is about. That’s why we decided to investigate other tabs on the website to get more information on this “innovative” project.

Economic model of the Q Initiative

As explained by the developers, the total supply of Q coins will be 2 trillion dollars and they expect the value of each Q coin to be approximately 1 US dollar. They are based on the fact that the currency will have a massive adoption and therefore will come to have that value within the world market.

In order to measure the possible success of the Q Initiative, the developers compare themselves with the crypto currencies, a system that they classify as deficient but that has demonstrated the need that exists within the market for a new technology and that for that reason has achieved a capitalization of 1 trillion dollars.

The Q currency will have a monetary policy that will control its movements and issuance within the market. This monetary policy will be exercised by a “Monetary Committee” independent of the company that is developing and promoting the Q Initiative.

This Monetary Committee will be in charge of controlling the issuance of Q coins as well as buying Q coins on a continuous basis at a price of 1 dollar/1 Q. With this system they seek to keep the currency with a real value in the market and also ensure that traders have the possibility of exchanging the Q coins they receive for dollars.

Q coins are not Crypto currencies

They also mention that “an immutable money ledger” is far from being an important need today” and this is where the inconsistencies of this project begin since in the information they provide from their payment network they mention that in the final step of the payment process “Periodically, all agents settle their outstanding balance through Q’s internal network. this settlement can use a blockchain ledger, enjoying the advantages of cryptocurrency and at the same time protecting customers from its numerous defects”.

If the project developers consider that a Blockchain ledger is not a necessity, why will they use it? This is really a dubious question since it does not provide clarity about the technology that will ultimately be implemented by the project.

Another aspect that made a lot of noise regarding the criticism of crypto coins is when they mention the issue of the legal deficiencies that these assets have. In this regard they mention that governments do not want to lose control over their coins and that is why crypto coins have not been able to emerge in the middle of the regulations.

Now, if this justification is given, how does the Q currency expect to be global and above national currencies? The problem posed by the Q currency about crypto currencies is an issue that they themselves are going to have to face.

Finally, the project mentions that it is not an ICO since the Q currency will not be sold but will be distributed free of charge to ensure the global adoption of the currency. However, in the project Roadmap they mention that between 2020 and 2021 they will sell Q coins worth 100 million dollars. Will the project sell Q coins or not? It is not entirely clear.

In spite of being a project that initially is not asking people for anything to give them Q coins, from TodoIcos we see with some suspicion the initiative. When we do an in-depth investigation of the data they give us, we find incongruities that we do not expect for a project that aspires to move 2 billion dollars within the global market.

We understand that by distributing the coins for free, people are not doing any kind of research about this project but the analysis must be done. This reminds us that we cannot rely on any project that has a well-decorated website and promises that we will all become millionaires, even though that is the dream of many ?.