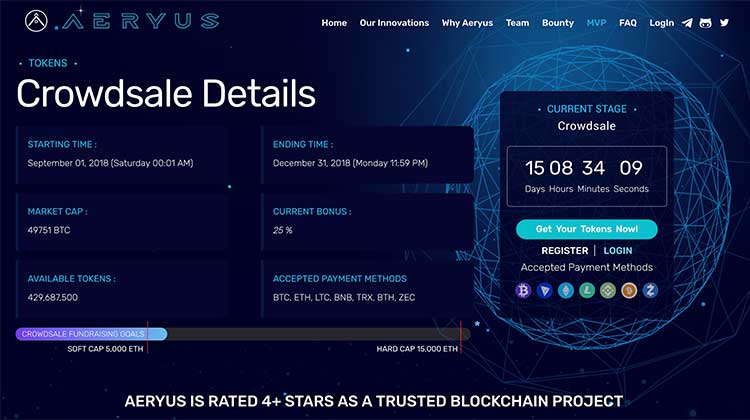 Despite the advances and impact that crypto currencies and Blockchain have had on our economy, there are still some obstacles that need to be overcome to see virtual currencies in the daily use of trading. Many believe that the solution to these problems can be found within the Blockchain technology itself. Precisely AERYUS is part of this group and presents us with a project that wants to unite Blockchain technology in a single protocol.

This ICO brings a project that defines itself as the collection of Blockchain tools and payment solutions that will enable the worldwide adoption of crypto coins. AERYUS is the first project that uses the ERC-721 standard to unite all the above-mentioned tools under a single Blockchain protocol and with maximum security Smart Contracts.

AERYUS will provide several tools that will allow both merchants and consumers to make transactions in crypto currencies in an easy and simple way. The first of these tools is the AERYUS ChainPayments, an application that will allow interaction with the Blockchain network and will be the way to ensure mass adoption.

AERYUS ChainPayments will function as a mobile application and will allow the use of crypto coins in a more intelligent and simple way than what exists today. The program will implement Artificial Intelligence to determine which is the best cryptomoney to pay and which is the best form of payment.

Also presented is the AERYUS BlockExplorer, a space to store Blockchain transactions in a secure, decentralized, legible and understandable way for any user, regardless of whether or not this user dominates Blockchain technology.

To provide security they bring us the AERYUS FirewallAI, a tool that will use Machine Learning and Artificial Intelligence to prevent frauds and thefts on the funds that we have insured in the Blockchain network. What this tool expects is to collect information about the user’s consumption habits and to block any transaction that is unusual within the patterns of the person in question.

Finally, the developers present the AERYUS One, the Point of Sale they are offering for merchants to accept crypto coins inside their stores. According to the developers, this Point will be able to receive all existing crypto coins and will work with Bitcoin’s Lightning Network and the Plasma Network that are working for Ethereum.

Use of Blockchain in AERYUS

As mentioned before, the project will use the ERC-721 standard, a protocol that creates non fungible assets and that the most popular utility in the world of crypto currencies has been with the “CryptoKitties” of the Ethereum network. With this system, developers want to offer a unique token for each transaction within the network.

With this process of “encapsulating” transactions, the developers are seeking the Blockchain network to be able to accept payments in all the crypto currencies existing in the market. According to these same developers, the application of the standard ERC-721 (Non-Fungible Token Assets – NFTA) can work with transactions of any type.

AERYUS will be the first project to use the ERC-721 standard and NFTA for the transaction market. This standard is used to create unique assets that are immutable and developers will use this quality to embody in each asset unique Smart Contracts that include all the details of the transaction that is taking place within the platform.

The token that will be distributed is with standard ERC-20 and is called AER token. This token will be used to pay for services and products offered within the AERYUS Blockchain network. This means paying for using AERYUS ChainPayments and AERYUS One. ERC-721 tokens, which are those created to document and secure all transactions within the platform, will be paid with ERC-20 tokens.

The developers have explained that on the ERC-20 tokens there will be an algorithm for burning coins, thus seeking to decrease the supply as time goes by. This will emerge with the growth of the project. The developers explain that if there are more transactions within the platform, more ERC-20 tokens will be needed to create the ERC-721 tokens and this will influence an increase in the demand for the token.

The price they have set for 1 AER token is 0.0002 ETH. The minimum they expect to raise is 5000 ETH and the maximum has been set at 100,000 ETH. They expect to sell a total of 416,666,666 AER tokens. TRN, LTC, BTC, ETH and BNB are being accepted as payment methods. The minimum amount established to participate in the public offering is assessed at 1 ETH.

Aeryus, Inc is the company behind the ICO, is a company incorporated in Delaware, United States. It has a team of 12 developers and 2 advisors.

Among the most outstanding members we can see Nicholus Andrews, the CEO and President of the project. He has worked as linux unix software engineer for more than  20 years, he’s also served as architect/engineer of Supercomputing projects for the Department of Defense and Department of Energy of USA.

Alan Goodman a communications expert, who has worked for nearly 30 years at MTV Networks, he was also a consultant on the digital television extensions of its networks and with teams in its Internet departments, virtual world and consumer products.

The person in charge of the finances of this project is Jaime Restrepo. He has more than 30 years of experience in the world of economics and finance. He has worked with large Wall Street firms for mergers, acquisitions, liquidations and analyses of companies around the world.

Among the advisors we find Jun Hao Ong, the founder of the investment advisory firm BlockConnectors and a recognized ICO market advisor, having worked with more than 20 projects worldwide.

Do they own a Minimally Viable Product (MVP)? They have a sample of how the project application will work. You can display it here.

Based on the Road Map, the project will be completed in the third quarter of 2019. BlockExplorer will already be operational and Tokens ERC-721 will start to be executed to secure transactions in the first quarter of 2019. By the second quarter of 2019 they will operate with the Lighting Network protocol.

The idea of employing ERC-721 tokens within the financial system is an innovative idea never before seen and can offer excellent levels of security and traceability for the use of crypto coins. With these innovations, it is possible to offer greater guarantees for the use of virtual currencies as well as paving the way for governments and state entities. Guarantees that can positively influence those who do not yet use cryptomedas because they do not trust them.

The developers of this project are people with high experience in the management of companies and even have links to Blockchain technology. This knowledge will help to ensure that the development of the project is carried out correctly, which will logically have an impact on the positive evaluation of the token in the future.

According to the Whitepaper, only 10% of all tokens will be put up for sale and 70% will be placed in a reserve managed by smart contracts that will block these tokens forever and only allow them to burn during transactions generated on the AER network.