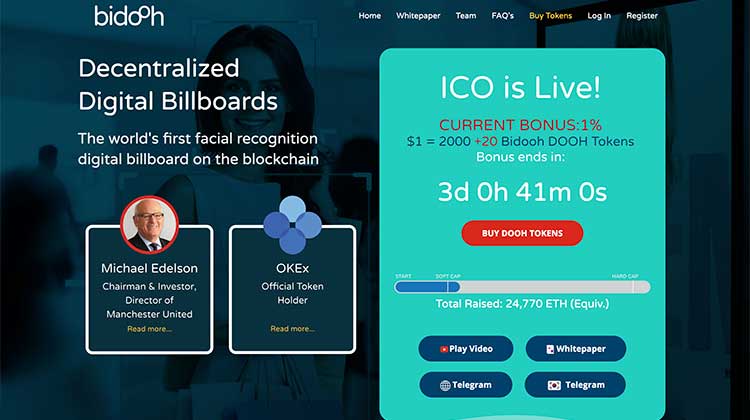 In recent years advertising has grown in a dizzying way with gigantic economic reports, however, the boom in this sector has affected consumers, who begin to feel bombarded and tired with an advertising market that is increasingly invasive.

Despite industry efforts to present a more personalized advertising format, consumers are not being reached as desired. So we need proposals with effective solutions and to this reality the ICO of Bidooh brings us an innovative project.

Bidooh is the first advertising system on physical digital screens that will use facial recognition and Blockchain technology. Show personalized advertising to people based on who they are and what they wear. All this will be controlled with a mobile application that will allow you to show the right advertising at the right time to the right person.

The companies will have a series of options to choose the target to which the publicity will go directed, between them they are included: Age, Sex, Color, Hair Color, Clothing Color, Weight, Ethnicity, Emotion, Body Shape, Possession of glasses and many other elements that can be distinguished by the camera and that may be of interest to the advertiser. The camera will also scan clothing marks that the person may have.

All this information will be analyzed in real time by the Artificial Intelligence technology that Bidooh is proposing. The same will serve to make facial recognition and analysis of the person, immediately.

Bidooh’s AdPaaS (Advertising Platform as a Service) will allow advertisers to prepare their advertising in a personal way, without intermediaries and very quickly. According to what the developers explain, they want to rely on the facilities offered by Facebook and Google with their customers to prepare advertising easily, without traumas and from anywhere.

The platform already has 16 screens deployed in different regions of the UK and is deploying 100 screens in the Czech Republic and 50 screens in Bosnia. They also have signed agreements to deploy 50 screens in Croatia, 50 in Slovakia, 50 in the United States, 50 in South Korea and 50 in Romania. It also plans to expand to South Africa and Dubai in the future.

Another important point to add is that the platform will also reward consumers for seeing and interacting with advertising. To do this, consumers must have installed the Bidooh application specially designed for consumers. The rewards will be given in tokens, coupons, discounts or offers from advertisers, with this system developers expect the interaction to generate a greater impact of advertising on consumers.

Use of Blockchain in BIDOOH

Bidooh in addition to using Blockchain technology for the payment system, have raised the use of this technology to provide transparency in the management of all data generated within the platform. The time a consumer spends in front of the screen and the rest of the information from consumers who view advertising such as their sex, race, age and mood of the person will be stored on the Blockchain network.

This assures the advertiser that all data is verifiable, secure and transparent. Being in the Blockchain network, the advertiser can audit the data automatically and immediately and with this information can prepare better advertisements and campaigns for the future.

The token of this project is called DOOH, it is made in the Ethereum network according to the ERC-20 standard. The token will mainly be used to buy advertising and it is estimated that each token will buy a total of 10 seconds of advertising on digital screens.

In addition to the purchase of advertising, the token will serve as a reward for the performance of other activities. As mentioned above, consumers who visualize and interact with advertising will be able to receive DOOH tokens. You can also receive tokens working as a kind of examiner that verifies that the advertisements comply with all the requirements and regulations of the platform.

In addition to the purchase of advertising, tokens may be used in businesses affiliated with Bidooh. The developers say they are working to close these deals and offer consumers a variety of options to spend the tokens they win on the platform.

According to the estimate of the developers, when the product is fully operational the purchase of advertising will cost 28 times more. 2000 tokens will pay 2000 visualizations and it will cost 28 dollars whereas in the ICO 2000 tokens cost 1 dollar.

The project is being carried out in Gibraltar and has a team of more than 18 developers and 5 consultants.

Among the members we can mention is the CEO of this project, Abdul Alim, a computer and internet technician who has worked with dozens of projects for the UK government. Some of the most noteworthy have been work on payment systems for large institutions such as the BBC and the London Transport System.

Shaz Mughal will be Bidooh’s CPO. He is the one in charge of building the MVP of the project and will be the one who will integrate the Blockchain network into the final system.

The CTO for this project will be Garry Partington, an entrepreneur and entrepreneur with experience in the world of advertising, media and Blockchain technology.

Among the advisors we can highlight Omar Rahim, an entrepreneur who has triumphed in the market of crypto coins with his own ICO that achieved a good collection. He has already worked with different projects as a consultant and knows very well the incidences of the market.

Do they own a Minimally Viable Product (MVP)? Yes, they’ve got the system up and running and you can see it here.

According to the Route they are proposing, the project will conclude in the last quarter of 2020. Between the first and second quarter of 2019 they expect to start linking Blockchain technology with Bidooh’s existing platform, as well as having consumer and advertiser applications ready for both Android and iOS. In the last semester of 2019 they expect to have the freelance community integrated into the system. In 2020 they plan to apply Artificial Intelligence technology to improve consumer recognition.

Bidooh is a project that goes beyond the simple approach, they are already working on their idea and have proven to have an impact within the market. According to the developers, the experience with the 16 screens in the United Kingdom was highly positive and this allows us to see how the future of the idea can be in the rest of the countries.

It is also important to add that within this operation Bidooh already has commercial agreements signed with companies from different countries, ensuring that this project will have a global impact very soon.

When Facebook and Google started digital advertising on their platforms they caused a real revolution for the world of marketing and advertising. Bidooh wants to implement that same format but in the physical advertising that we see every day and, understanding the magnitude of a market that moves 34.8 billion dollars a year, this idea can be really productive.

They have won important recognitions

Bidooh’s idea has won awards and recognition in the technology sector, and one of the most notable was the British Royal award “Pitch at the Palace”. Beyond the visual impact of the awards ceremony, these recognitions give the project a very good position within the market and allow investors and consumers to be interested in this new idea.

Cons of the ICO BIDOOH

The Bidooh team is solid and has people with vast business experience in the world of advertising, however, there is a little more to do with Blockchain technology. It is necessary to know all the possible setbacks of the cryptomime market and especially the issues related to the birth of your new currency.