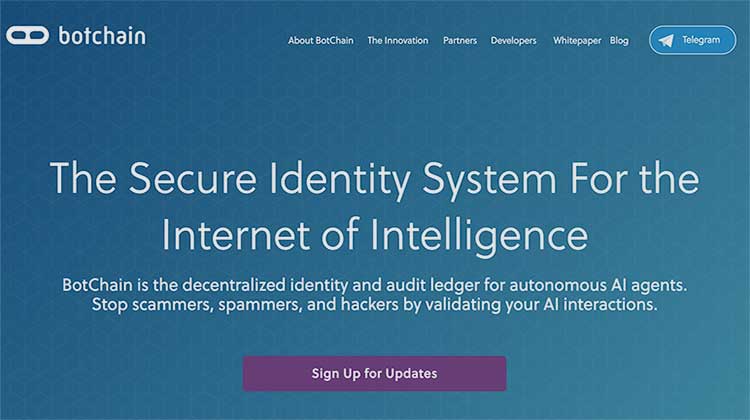 This ICO brings us a Platform for identification and auditing of Artificial Intelligence systems built on the Blockchain network of Ethereum. By means of the standardization for the determination of the correct operation of the Bot. BotChain will allow developers, companies, software companies and system integrators to verify the Bot’s identity, audit the interactions it has had in its operation and place limits on the robot’s autonomy.

To achieve this, the developers have seen that with the Blockchain can create a solution as has not existed previously because this technology provides the tightness and security needed to armor a solid Artificial Intelligence service. With Blockchain the lack of transparency in the system is overcome, greater confidence is achieved and a better standardization before the autonomy that the machines can have.

BotChain is based on 3 fundamental pillars

Currently, bots are handled in a very opaque way and it is not known until now how they make decisions and how they operate, developers do not have access to a system that allows them to audit the autonomous decisions of the Bots. There is also no way to evaluate automatic learning models to pinpoint where learning errors occur. All this shows that transparency in the system must be an objective to be achieved.

Standard protocols are needed for stand-alone systems to help Bots communicate and synchronize their work on the network. BotChain wants to provide a common management infrastructure to help achieve this goal.

The market for developers who are producing Bots is currently very fragmented and has not managed to unite the different companies and producers in a single route to take full advantage of the innovations. BotChain wants to create a commercial environment in which all parties can develop and acquire knowledge among themselves in order to improve the performance of the various Bots.

Use of Blockchain in BotChain

For the developers of this project the application of Blockchain technology is indispensable and implies a need for the Bots market to continue growing. Thanks to Blockchain can achieve verifiability, authenticity and auditability in the use of Bots and Artificial Intelligence to generate greater confidence.

Thanks to Ethereum’s Blockchain network on the Internet, BotChain publishes a record of all Bot activities on a common, shared, widely visible and auditable site. With this users, businesses and consumers can ensure that the actions of the Bots are being executed properly. With a continuous audit, if there is a fault or anomalous behaviour in the Bot, the activity can be tracked in order to observe the cause of the error and be able to repair it.

Benefits of applying the Blockchain network in BotChain

The BotChain network in the Blockchain can become a center of trusted service providers among many organizations that build and operate Bots.

Keep records of what a Bot did and why they can be stored securely in a reliable, networked standard blockchain, and can be applied to a single Bot or to workflows involving many Bots.

By incorporating blockchain, all the major companies and developers of Bots would be able to participate in the network, but no one would exercise absolute control. The rules will be established by consensus and vote of the members of the ecosystem.

Uso of the BotCoin token within the process

The BotCoin token (BOTC) will be the payment currency within the platform and the universal currency that will be used by users and developers who are part of the BotChain ecosystem.

Network service providers that provide services for the BotChain node network will be paid in BotCoin for their services. In addition, BotChain Core members will also win BotCoin by providing government orders for platform enhancement.

But, in addition to functioning as a payment currency, BotCoin is also fundamental for the construction of the DAO (Decentralized Autonomous Organization) that we want to propose here. The token holders will participate in the voting for the formation of the project’s Board of Directors and in a series of other decisions.

It has been determined that there will be 40 million pre-mined BOTC tokens and 18 million will be earmarked for ICO. The value that has been determined for the BOTC token is 2 dollars with 50 cents each. They expect to raise a minimum of $15 million and a maximum of $40 million. To invest in this project you must enter with a minimum of 10 thousand dollars. It is possible to acquire the token by paying with ETH, BTC and FIAT currency (Dollar).

This project is being carried out by the company Talla Inc, a company based in Boston, United States. In addition to Talla, Gupshup, CareerLark, Botkit, Zoom.ai and Progress.ai are working as partners for this project. The team of developers is made up of 9 people in total.

Its CEO, Rob May, is a recognized investor of ICO´s and has been since the beginning with quite interesting projects.  He has business experience through his work as founder and CEO of Backupify. We can also see Dr. Byron Galbraith in Neurological and Cognitive Systems, who will be the chief data scientist. For all the work with Blockchain technology development they will count on Henry Wagner, Software Engineer who has already worked in different companies of the technology sector.

Among his advisors we will meet Michael Malone, CEO and founder of VestChain and Director of Galaxy Digital Labs, they have extensive experience in developing Blockchain technology in different markets.

Do they own a Minimally Viable Product (MVP)?  Yes, but in order to enter the platform you must first register as a developer on the platform here .

According to the Roadmap presented by the project, by the month of November 2018 is expected to have the services of identity and audit of the Bots in operation within the platform. By November 2019 they hope to have the Protocols for Bot-Bot Communication.

Among all BotChain’s partners there are 400 million end users, a fairly large number within this market of Bots automatons. Although we do not know for sure what the partnership between BotChain and these companies is like, the developers will find themselves in an environment experienced with the market and the handling of this technology.

In addition, the advisors of this ICO have extensive experience in the world of Blockchain, which means that there is an important foundation for this project that will surely boost its process of selling coins and further development.

Certainly, the development of Bots automatons and Artificial Intelligence is something that is among the main objectives of the companies dedicated to the technology sector, although there have been important problems that have prevented a more accelerated development. Since BotChain have analyzed these problems and have seen how Blockchain technology can provide a useful and cost effective solution. The application of Blockchain technology for this project is also very well focused, being used for what is really needed.

Cons of the ICO BotChain

2 dollars and 50 cents for each token is a very high value if we compare this project with the vast majority of ICOs that exist in the market today. Added to this, the initial investment value of $10,000 allows us to see that the investment here is not democratized and is only focused on large investment funds or capital with great purchasing power.

The fact that there is no democratised investment may not be seen as a problem at the outset, but it must be remembered that this project involves the creation of a DAO in which all token holders will participate to elect the Board of Directors. Will the project be in good hands if large investors enter? It’s a matter to think about.