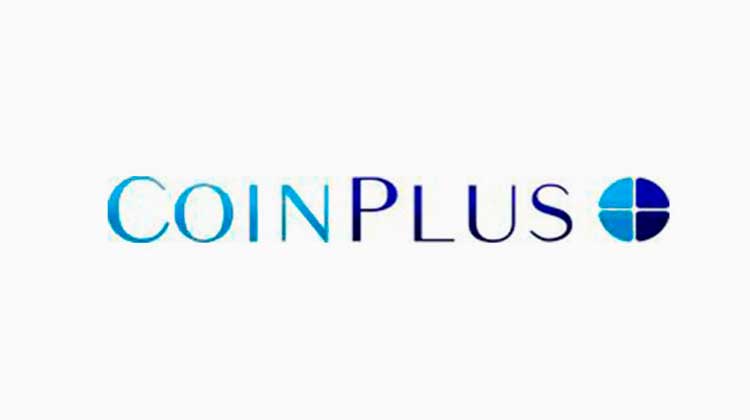 CoinPlus understands how important the security of crypto coins keys has been one of the most important issues to consider within the world of Blockchain. Unfortunately, dozens of hacker attacks and thousands of stories of losses of real fortunes have generated that many today are afraid in the use of crypto currencies.

In order to provide a solution to the need to improve the security of cryptoactive keys, this idea was born, a project that proposes the “digital materialization of digital keys in one or more physical products“.

CoinPlus offers products that materialize private keys into one or more physical elements for the storage of Bitcoin, Ripple, Litecoin, Bitcoin Cash or Ethereum. These physical products they offer come in two formats, one called “SOLO” and the other “SOLO PRO”.

The “SOLO” version is the company’s simplest product but is still safe and durable. This version can be in the form of a plastic card (similar to a credit card) or in a metal bar format.

On the other hand, the “SOLO PRO”, which can also come in card or metal bar, is presented in 3 physical products that together make up a format of multiple private firms. The system works with 2 of the 3 private signatures, thus allowing that in case one of the signatures housed in the physical product is stolen or lost, the funds can be accessed with the other two signatures.

How are crypto coins used in CoinPlus physical devices?

It is important to note that these physical devices are not offered with any cryptomone. CoinPlus developers do not work as operators or exchanges of crypto coins. To this end, the crypto coins must be purchased separately and deposited at the public address that is embodied in the SOLO physical device.

It is important to note that CoinPlus has a unique system in which one public key is maintained with two private keys that are both necessary to access funds. The developers mention that they have solved it thanks to the algorithm of the Cryptographic Elliptic Curve that allows the computation of specific arithmetic operations in encrypted data.

The company behind the production is called Coinplus SA and is a Luxembourg company. However, it is important to add that the manufacturing process of SOLO devices is done with the participation of two companies totally independent of each other. This procedure is done to ensure that no one knows the full private key that is embodied in the physical device.

This quality is also an important differentiator of CoinPlus with the rest of the companies that manufacture Software Wallets since these other companies own and maintain the private keys of each Wallet, which is a risk for the users since their funds are accessible by third parties not authorized by the owner of the funds.

As mentioned above, SOLO devices are available in two formats. The SOLO plastic card and the SOLO metal bar. There are also SOLO PRO, which come in the same formats as plastic card and metal bar but, in this case are 3 physical devices and you can access the funds of the private key with 2. 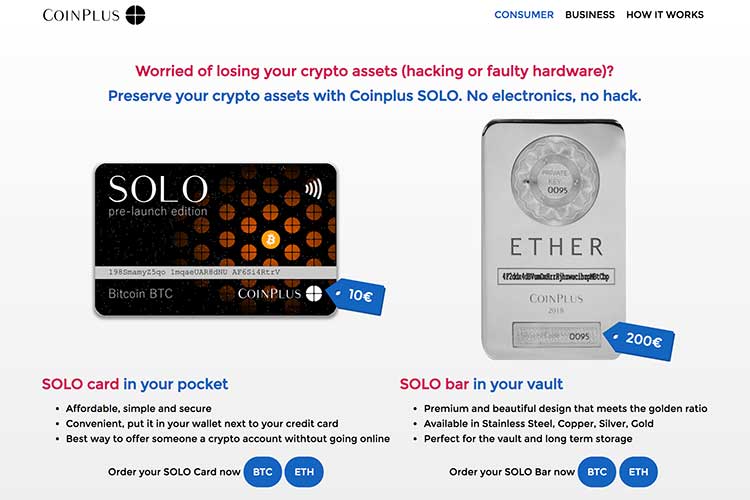 SOLO plastic cards come with a built-in NFC chip in which the device’s public key is stored. This allows you to easily share your SOLO address to receive funds. No private key or private information is stored inside this chip.

SOLO metal bars are totally resistant to water, fire and the passage of time. The private keys are carved in 2 different parts of the bar. In addition to metal, the developers offer versions in gold and silver, thinking of the most demanding customers who want a luxury item to safeguard their assets.

SOLO PRO devices, both in plastic card format and metal bar format, have a multi-signature private format and share the same address or public key for asset deposit.

Use cases of SOLO devices

CoinPlus explains the different assumptions for which we can use SOLO, in which the implementation of these physical devices can be very useful within the cryptomime market.

First of all they mention that plastic cards can SOLO be delivered as Gift Cards in companies or commercial establishments. The developers of CoinPlus offer the possibility to personalize the plastic card with the colors and logo of the applicant company.

They also offer their services for establishments that want to accept crypto coins. For them it is recommended the SOLO PRO that allows the storage in 3 physical devices but sharing a same public address for the deposits. What is recommended is to have one of the SOLO PRO devices at the place of trade and the other two stored in a safer place.

CoinPlus also focuses on ICOs with its SOLO devices offering. First, ICO developers can offer plastic cards SOLO reloaded with project tokens or coins, providing an option to store their coins for investors who are not as familiar with the cryptomarket or the use of a cryptomime wallet.

Another important utility presented to ICOs is to be able to safeguard the funds obtained from the sale of tokens. In the face of hacker attacks on hot wallets that hold funds online, it is well known that the use of cold wallets is recommended for storing large amounts. Faced with this reality, SOLO’s physical devices with their unique private key system are a highly recommended recommendation for ICOs.

In addition, it is also useful for ensuring the governance of the use of the funds reached by the ICO. With the SOLO PRO system, devices can be distributed to 3 members of the executive management of the project, thus seeking that the multi-signature system helps that the funds are not used by the whim of a single person.