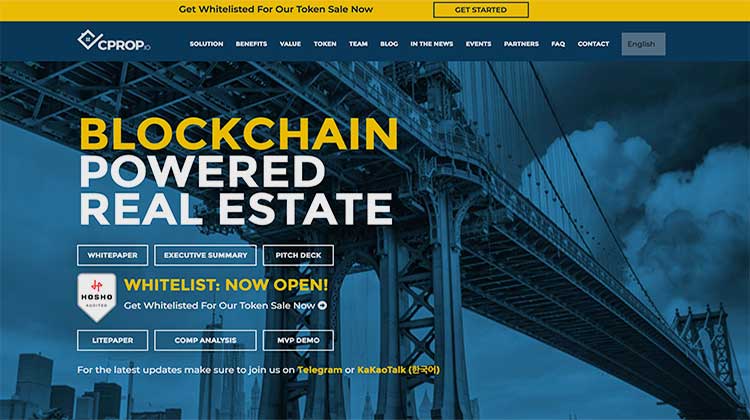 CPROP presents us with a real estate transaction management system based on Blockchain technology so that it can be integrated with property buying and selling portals from all over the world. Its developers seek to provide greater confidence, transparency, security and even speed, but how do they want to achieve it? With Blockchain technology, Intelligent Contracts and automated processes that work more efficiently.

What is proposed is to use Intelligent Contracts and an Escrow that supports them, in order to manage deposits, transactions and operations in a safe, transparent way and with the possibility of doing them remotely without the need of participation of a trusted third party.

With this system, CPROP offers advantages for several parts that are inherent to the process. In the first place it benefits the buyers and sellers who participate in the real estate operation with 4 advantages:

For real estate companies they also provide a number of benefits, which in this case the developers have condensed as follows:

Finally, developers determine that there are also benefits for professionals providing services within the sector because thanks to the platform administrative work would be done in a faster, safer and more efficient. Adding also the possibility of accessing even more customers, compared to those who can get through a physical office.

Use of Blockchain in CPROP

The implementation of Blockchain technology in this project is shown as something really suggestive due to the approach and applicability that have managed to give within an industry such as real estate.

In the first place they show us the application of Intelligent Contracts so that the operation between buyer and seller is handled with total security and the amounts are retained until the events of this type of operations (transfers, rents, sales, etc.) occur.

But, in addition to this, the most interesting thing that the project shows is the possibility of tokenizing the Scriptures legally required to complete the operation. What is estimated is that once the documents are signed, they are converted to PDF format and then processed in hash in the middle of the Chain of Blocks, all this with the use of security marks and fingerprints to fully shield the operation.

This would comply with legal requirements such as: describing the property, giving the identity of the parties involved in the process and the signature of the person transferring the real estate.

In addition to this possibility, developers also provide the opportunity for the CPROP platform to bring with it a directory of service providers, such as attorneys, real estate agents, insurers, etc. As well as the possibility, by means of Blockchain, for users to make assessments according to the satisfaction of the services provided.

Using the CPROP token within the process

The token will work with a structure based on the membership model, therefore, all people who want to use the CPROP platform to offer their services must purchase the tokens as this is the only means of payment accepted.

Buyers and sellers must also possess the token to pay for transactions such as using smart contracts, tokenizing the deeds of the transaction and passing them to the Blockchain as well as all other administrative surcharges.

Currently 1 CPROP is priced at 1 cent and the minimum investment amount is 0.1 ETH. The number of tokens that will be in circulation is projected at 6,133,333,333 but for sale at the ICO there will be only 4,600,000,000. This project has a maximum collection estimate of $20 million and a minimum of $2 million. Tokens can only be purchased using ETH as they will be sold through an Intelligent Contract.

CPROP is one of the few ICOs in the United States of America that can be observed in today’s market because of all the regulations that are being put in place about these operations within the American legislation.

The team of developers is somewhat small, only 7 people to achieve the realization of it. As an important point of this team we can see that, despite being based in the U.S., they have set vision to work mainly in the Asian market.

To highlight its members we have its founder Adam Koehler, a young entrepreneur with experience in developing technology for application in the Real Estate sector in addition to being a researcher and enthusiast of Blockchain technology. We can also see Sandy Selman, an economist and financial advisor who has long led the investments of important firms, standing out mainly in technology investments.

Along with the team that develops it, CPROP also has a team of very high level advisors in both the business sector and the cryptomoney sector. To highlight we have the figure of Bryan Lemster, a reference in the world of crypto coins with everything related to the development of Intelligent Contracts and Blockchain security, a very important aspect to take into account in this project due to the importance of Contracts for the platform.

Do they own a Minimally Viable Product (MVP)?  Yes, the developers have developed a demo of the website which can be viewed at CPROP . It should be noted that this demo is adapted only for American legislation but, in the words of the team, can be adapted for any other jurisdiction.

The project roadmap shows that work has already been done prior to the launch of the ICO, which is important as it demonstrates the foundations of this project. It is expected that the page will be working in a Latin American portal by August of this year while they project that by the 3rd quarter of 2020 they will work in several international portals.

The idea of bringing Blockchain to the Real Estate market is not such a new idea, however, the idea of tokenizing formal documents can represent a quite interesting change within the sector that could even be applied to many other sectors that also need formal documents to be carried out.

It will be necessary to wait to see how the development of this technology is carried out and, above all, how it is compatible with the legal requirements for carrying out this type of operations. If we were to make good progress in both directions, we would be talking about a very important innovation.

The MVP sample allows the investor to appreciate the evolution of the project with respect to its application and in this particular case, the working sample looks very good. In addition, according to the Roadmap, the platform will start working very soon, in August and we can see the project working on a portal in Latin America.

The developers behind the project are businessmen who have already led companies to success and who know how to maneuver with the various obstacles that arise in the development of markets, this experience is very positive for the project and gives confidence to the investor regarding their safety.

The formal processes that are carried out within the real estate sector are established in the laws and must be complied with given the obligatory nature of the same. If there is no recognition of Blockchain technology as a legal evidentiary means to prove the signatures and authenticity of the documents in the Block Chain, its application would be useless.

A change in legislation or a jurisprudential opinion recognizing the application of technology in this type of commercial transactions is needed.

Prohibition of purchase to many countries

In the White Paper of the project we realized that CPROP being a U.S. ICO cannot be sold to countries sanctioned by that country, nor can it be sold to U.S. citizens.

The same Whitepaper also indicates the impossibility of purchasing the token for citizens of the People’s Republic of China, although we do not know the exact reason why operations for this country have been limited.

This limitation means that two of the world’s largest investor markets cannot enter the ICO, which can have a negative economic impact at the time of collection.