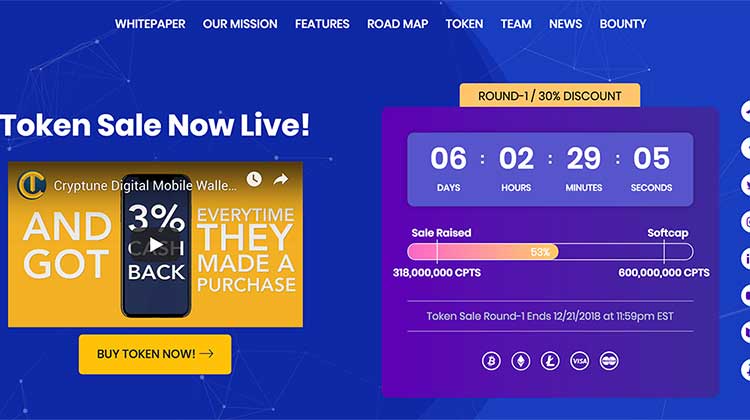 One of the problems presented by the universal adoption of crypto currencies is the way in which it can be used within universal trade. Many traders are accustomed to their traditional systems and do not see the need to switch to a system that is really simple to use but looks very cumbersome to them.

Given this fact, it is necessary to present projects that focus on allowing the use of cryptomedas within the traditional system and also bring the latest advantages that technology can provide to improve payment processors. Due to this need, Cryptune is born, a project that presents us with a Point of Sale (POS) that can help in the adoption and propagation of the use of cryptomonedas.

Seeking to be “the first platform in the world that rewards users”, Cryptune brings us through a STO the development of unique software for Points of Sale. As explained by the developers, your Point of Sale is attractive to sellers because it includes a number of unique features such as inventory control, sales tracking, SMS alerts, easy to use and all for one of the lowest transaction fees in the market.

Specifically for the market of crypto coins, this point of sale will also be very important since it will allow the acceptance of more than 1000 different virtual coins. These numbers are impressive and if they achieve their mission, they would place this POS as the one that most crypto currencies accept in the whole world. As expressed by the developers, these numbers are only possible thanks to the alliance with Coinpayments.

In addition, the Points of Sale will also allow merchants to immediately exchange the Crypto currencies for FIAT currency, an important element in providing security to merchants who are not so familiar with the crypto currencies and do not feel completely safe using them.

To get the software adopted, developers have developed a reward scheme using the CPT token. It will serve as a reward for both consumers and other members of the Cryptune ecosystem. Along with this utilitarian token, they will have a security token, the CPTS. This last one is the token that is being offered inside the STO and later we will explain how it will work as well as explain how the reward system works with the CPT token.

In addition to the Points of Sale, Cryptune is developing a mobile virtual wallet that will also work within the payment system that is being developed. With this wallet you can host the 1000 coins expressed by developers that can be used as well as can be used to pay with ApplePay, Android Pay and Google Wallet.

Cryptune is preparing various types of Points of Sale, thinking of adapting to the needs of each merchant that is presented within the system. Taking into account the smaller shops or those who have to have more than one Point of Sale, presents the VOX line with its three slopes, the VOX-Mini, VOX-U and the VOX-C. These are all Wireless Points and smaller than the main Point of Sale that Cryptune is producing. According to project planning, these Points will start to be produced as of the second quarter of 2019.

As mentioned earlier, two tokens are being presented in this project, the CPT and the CPTS. The CPT will be a token that will serve as the backbone of the Cryptune Rewards Program. For each purchase consumers make, they will receive back 3% of the amount spent on CPT tokens, however, merchants can also set up unique offers and rewards.

CPT tokens may be used as a form of payment at merchants registered within Cryptune. To encourage merchants to accept payments on these tokens, the system will not charge a fee when they are used. Developers will also develop rewards for merchants to pay with these tokens. The CPT already has agreements to work on 3 Exchanges: HitBTC, BitPay and CoinBene.

On the other hand there is the CPTS, the security token that will grant 5% of annual profits to those who own it. The developers explain that the earnings to be determined here will be calculated based on all revenues earned by Cryptune LLC, the company behind the STO. The CPTS token may be traded at Bancor.

All CPTS tokens issued for this project are 10 billion tokens. They are earmarking 5.2 billion tokenss for the sale. The price they have set for the sale is 1 CPTS = 0.00002 ETH. They expect to collect a minimum of 14,000 ETH and a maximum of 140,000 ETH. They are accepting ETH, BTC, LTC, US dollars and Euros. The minimum investment per investor is 1 ETH.

This project is being developed by Cryptune LLC, a company located in Delaware, United States. It has a team of 12 developers and 4 advisors.

Among the members we can highlight are Ricardo Cuesta, the CEO of the project and co-founder. He has more than 25 years of experience in software development and 18 years in the field of payment methods.

The CTO of the project will be Enrique Gómez, a Programmer with more than 7 years of experience in the Blockchain field and 18 years in the programming area.

Hampzy Perez will be the vice president of marketing and will help build a brand around Cryptune that will help sell the product everywhere.

Guided by the Roadmap, the project will conclude in the fourth quarter of 2019. In the first quarter of 2019, BizNode will be implemented so that it can work with merchants who are already registered with Cryptune. In the second quarter of 2019, the distribution of Cryptune Points of Sale will begin. For the last quarter of 2019 the necessary calculations will be made to pay the first dividends for CPTS token holders.

According to the project Whitepaper, Cryptune has already signed distribution agreements with international companies and this gives them some security of their presence in Brazil, United Kingdom, France, Germany, Holland, Norway, Switzerland, Dominican Republic, Costa Rica and some other countries. Having a presence in all these countries would represent for the project a global reach that would be highly beneficial for both the CPTS token and the CPT token.

They already have agreements to list the tokens on Exchanges.

As we also saw in the White Paper and mentioned in the analysis, Cryptune has already signed with several Exchanges so that the CPT and CPTS tokens can be marketed in them. In addition, the exchanges in which they will be listed are markets with good capital movement, allowing these tokens to access a trade that may help a good valuation in the future.

The North American authorities have been very active against the ICOs that have been carried out within their jurisdiction, being so incisive that their actions have had repercussions even in the rest of the crypto-money market. Cryptune has taken the necessary precautions not to allow U.S. citizens to participate in its offer, however, their legal team has started the SEC registration process, which could take up to 9 months, but as explained by their CEO, they definitely intend to host a STO in the United States in the future, when their legal team has finished with registration and as we mentioned, this process is already underway.