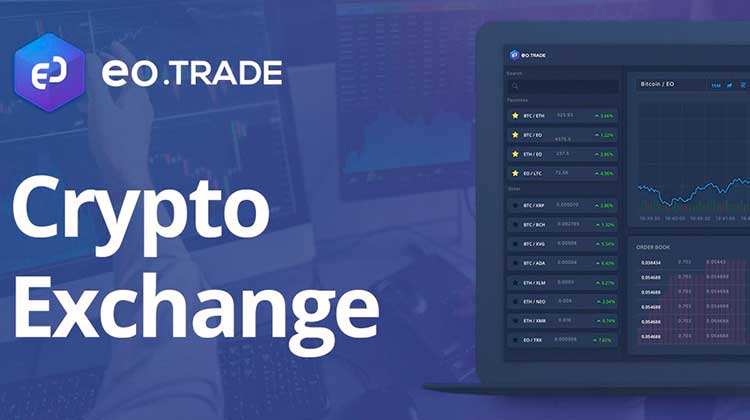 The ICO of EO is brought by ExpertOption, an online brokerage company that has a remarkable relevance in the market. After thinking about it, the developers of this page have decided that it is time to offer Criptomonedas investment options in their platform, as well as to offer the option to exchange cryptomonedas for fiat currency quickly and easily.

To achieve this they have devised this project, offering the EO Coin token, a virtual currency that can be used by investors on 4 platforms that will be created by the developers of ExpertOption. With these platforms the team states that they are “closing the gap between traditional trade and Blockchain technology.

The first of these 4 platforms will be EO.Trade, a virtual exchange that, in the words of the EO drivers, will have the power and strength to support the market that exists today around crypto currencies.

The next platform will be EO.Finance, a virtual wallet that will allow the user to make direct transactions between crypto currencies and trust securities in a fast, direct and simple way. People who have the wallet may acquire cryptomonedas by paying directly in trust currency.

The third platform they offer to the public is not a new platform but a modification to their ExpertOption page. They are offering to add cryptomime functions to the investments that can already be made within their platform. According to the developers, people who have accounts with project tokens will have more profits.

Finally we will have EO.News, a news portal that will have the latest events that occur in the world of crypto currencies, thus providing fresh information so that investors can make their movements based on true data. This portal can be used by the general public.

Use of Blockchain in EO

On this point we see that developers have given very little information beyond the creation of a Virtual Wallet and crypto transactions. However, in their Whitepaper they announce that ExpertOption accounts working with crypto currencies will have all the encryption security of Blockchain technology, an important point if we consider that the security of these assets is extremely important in the face of constant hacking that is seen daily.

Beyond this data, we see very little implementation of Blockchain technology properly speaking within the project.

Using the EO token within the process

In this particular, the developers in the Whitepaper of the ICO, have established that it is a utilitarian token, that is, it will have specific functions within the platforms. They have announced that they will have utilities for the EO.Trade, EO.Finance and ExpertOption platforms.

In EO.Trade it can be used to pay the commissions that are paid by operation, having a special discount in comparison with the rest of the other currencies. The token can also be exchanged for the crypto coins and Fiat coins listed there.

In EO.Finance can also be used to pay transactions with a lower percentage rate. On the ExpertOption side we will see that it is offered that people who own the currency within the platform will have greater increases in their earnings, although on this we do not know how it will apply within the platform.

The discounts applied to token holders will be different each year. The first year will have a 50% discount on the fees to pay for using the services, the second year will be 25%, the third 10%, the fourth 5% and from the fifth year no discount will apply.

As mentioned above, the development team behind this ICO is already consolidated as ExpertOption, a platform that has been in operation since 2014 and has more than 100 employees in 6 countries.

To mention some members of the team we have first Ivan Opria, CEO of EO Group, founder of ExpertOption and expert in the world of large investments. It is also necessary that we mention Vladimir Arsenev, expert in Marketing and technical application who has made ExpertOption one of the best options for investors and who plans to apply the same techniques to bring OE platforms to maximum use.

Within the group of consultants we can mention Heinz Grünwald, a consultant with experience in marketing for crypto coins and ICO´s who hopes to support this project so that it can have good sales in all parts of the world.

Do they own a Minimally Viable Product (MVP)?  Yes, they already have the ExpertOption page where their operations for investment work.

The information you have in your Roadmap mixes a bit with ExpertOption data but regarding the EO project we can see that it started to develop at the end of March through the private sale of tokens. EO.Finance’s Wallet was scheduled to come out in July, but we haven’t seen any information about it yet.

For the future it can be observed that they expect to have in December 2018 their Exchange of crypto currencies while for the second quarter of 2019 the EO.News portal will be ready.

ExpertOption operates with licenses and authorization to do all operations that are carried out by investors. According to their White Paper, they hope to obtain all the necessary licenses so that operations with crypto coins can be done according to legal norms.

This is an important advance if we consider that there are very few Exchange of Criptomedas that work with licenses and authorizations, bringing this way a differential for EO.Trade that can be very positive to achieve the attraction of traditional investors inside the world of the cryptomedas.

Experience in the investment sector

The company ExpertOption has been operating since 2014 and has had important advances within the world of investments, which positions them favorably within the Online Brokers. To reflect that reputation to the transactions in crypto currencies would be an important catalyst, considering that in the page operations are made for important amounts of money.

In addition, the developers have experience in business development because they have been running this company for some time and have done so with remarkable success.

Cons of the ICO EO

A lot of money for the development of the project

100 million dollars maximum is a very high figure for this project and in fact, analyzing the specific costs of it we can see that the amounts are exorbitant and are not combined with costs that are normally carried in the world of crypto currencies.

Let’s start with the development of the Virtual wallet, and as you have established, $10 million is needed for this. It is a totally illogical amount if we consider that hundreds of Wallets have been created by companies and developers with less than 10% of that figure.

25 million dollars to develop your own Exchange is also a little too high if we compare it with the beginnings of the most important virtual Exchange Houses of the market like Binance, HitBTC or Coinbase.

They don’t offer anything new.

What do you offer with this new project?

A virtual purse? There are already hundreds of Wallets on the market.

An Exchange? There are already many in the market and the big ones are very well positioned in the crypto world.

A news portal? There are also many on the web that offer new information and give insider recommendations to people who subscribe.

Understanding this we realize that we are offered absolutely nothing new that we do not already have in the crypto market. In fact, the information about the project offered in the White Paper seems to be aimed at people who are totally unaware of Blockchain technology, because they seek to impress with data that investors in crypto currencies already know and that are common within this technology.

Little use for the token

With respect to the usefulness of the token, only the percentages of discount that will be obtained by paying with the token EO have been announced, of the rest, it is not seen any other type of use. In fact, they won’t even have permanent discount percentages, since after the 5th year, they won’t exist anymore. What will the EO token be used for after the 5th year? It will remain a simple speculative asset and nothing more.