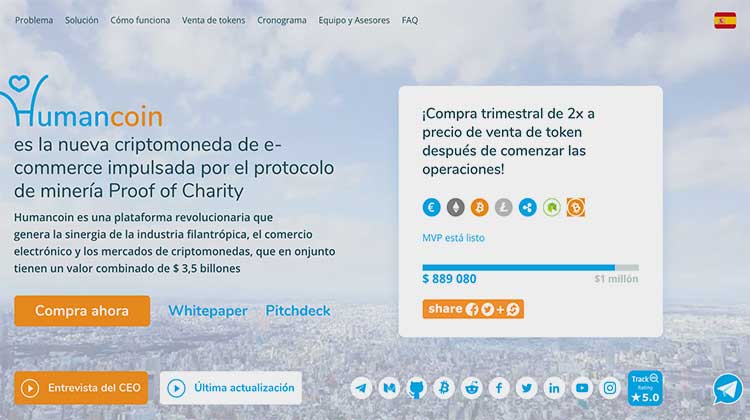 The ICO of Humancoin wants to achieve a change in the world of philanthropy thanks to Blockchain technology. The developers have concluded that the donation system as it currently works has two major problems, the lack of transparency and the consequent lack of trust that this generates. Additionally, they consider that the difficulty with the variety of coins and the lack of benefits for the donor end up discouraging charitable action.

To achieve change they think that Blockchain technology is the best tool that can be implemented. A Blockchain network can provide confidence thanks to its transparency, follow-up and security, allowing donors to keep a visualization of their donation and see what it is being spent on. In addition, as a benefit, the donor will receive HumanCoins for his donation, having these, a utility that will motivate him to make the philanthropic act, fulfilling a function similar to a loyalty program of electronic commerce.

As another interesting plus of this project, the developers are designing the option of providing a receipt for each donation made by the person and thus can use it as proof for the respective tax deduction to be made in the appropriate tax jurisdiction.

Use of Blockchain in Humancoin

As mentioned above, with the use of Blockchain the platform will give the possibility of online control and monitoring of donations made without the need for an intermediary, an NGO or an Institution.

How does it work?

As explained by the developers, the platform will have a procedure both for people who receive donations and for benefactors. On the side of the people who receive, the platform will ask you to fill out a form that will later be reviewed by the inspection team of professional auditors to avoid scams, once they are verified, you will be asked to indicate a purse to receive your money there.

On the side of the benefactors, the platform will ask you to first make a charity register, then it will ask you to recharge your wallet so that with these funds you can choose a project or a “HumanPool” (a group of projects automatically selected from those with the highest scores in the community) to which you will donate the money you have recharged in your wallet. Once you have delivered the money, you will be able to track the transaction and by the time the process is completed or the purpose of the donation has been fulfilled, you will be able to classify it.

To have a control of the donation an Smart Contract will be taken in the network of Ethereum. With this Contract, the issuance of tokens will be monitored in the stages of pre-sale, sale and even after the sale of the tokens (this will be explained later). The Intelligent Contract will also provide an opportunity to confirm whether the funds raised are being used as intended. The developers have determined that as the project progresses, the option of adding an Intelligent Contract for each project registered on the platform will be included.

Also, within the platform there will be the option to vote and rank large projects thus achieving much larger sums of capital. These votes will allow donations to be made to HumanPool, a system that automatically distributes funds to the highest rated projects in the platform community.

Using the HumanCoin token within the process

People who make their contributions through the HumanCoin platform receive 50% of the value of their donation in Humancoin tokens according to the weighted price of the currency in the market.

The tokens will be redeemable for discounts, miles, coupons and bonuses between the partner companies of HumanCoin, thus granting a benefit for donors. This condition does not turn HumanCoin into a competition with the loyalty programs of the companies, but in a complement decided to work as a team, since the token will be integrated to the systems that are already in operation. The developers have established that with this method they achieve a strong emotional resonance.

It is important to mention that donations will NOT be made with the HumanCoin token. The projects will be able to receive the money in the currency they need to execute the project or cover their need. The contributor may transfer the money in any currency as HumanCoin’s currency conversion instrument will deliver it in the requested currency.

Another thing that is very important to mention is the Proof of Charity that they have determined as the platform for mining the currency. This system provides that there will be additional emissions of the token, which will be linked to the volume of donations made on the platform, each additional issue will be made by one billion tokens. The developers have warned that in this way the project will be able to be scalable and will not present problems of shortage of their currency.

For the first issue of tokens the existence of 6 billion has been determined, allocating for sale 3 billion 55 million (50.9% of the total). The price of each token has been set at one cent, although for the pre-sale (started on July 1 and ends on August 15, 2018) will be given a bonus of 50% on the purchase.

HumanCoin has established itself in the UK with a team of 6 developers and 10 consultants. To mention some of its members, one must necessarily mention its CEO, Giles Gailer, an enthusiast of technological development and cryptomedas who believes very much in charity.

Another important member is Aravinda Babu, the team’s expert in Intelligent Contracts and Blockchain technology, who will be behind all the technological development of the project to ensure that the application is done correctly.

Also worth mentioning is Project Management Manager Nathan van de Ven, experienced in the world of crypto coins who has worked with various projects in the market.

Among the consultants we are going to meet David Rippon, who is president of Charity IT, a company that provides technology application consulting services to organizations that are linked to charity. Another notable advisor is Paul Cliffe, an investment advisor who serves as CEO of Block Venture Project, an investment firm that seeks to bring cryptoactives to traditional investors.

Do they own a Minimally Viable Product (MVP)?  They have announced on their website that yes but the only thing that could be observed is an image, which leads us to conclude that the MVP is not yet available.

Charity moves many millions of dollars year after year, both the money of public institutions and the money of companies and individual taxpayers, thus being a very important sector to consider within the economy. HumanCoin is proposing to channel this great industry through the transparency of Blockchain, which can undoubtedly be a great boost for both charities and donors, understanding that the application of this technology will have greater understanding on the use and destination of donated funds.

Cons of the ICO Humancoin

One of the main characteristics of crypto coins is that they are deflationary, but why do they have this characteristic? Because its issue is limited since its inception, which means that with the increase in demand for the currency and a limited supply, its price increases.

With a supply of tokens like the one HumanCoin is proposing, in which a billion tokens will be issued each time the platform deems it necessary, it can only guarantee that the currency will suffer the effects of inflation and depreciate.

The investor who wants to buy the token from any ICO does so with the intention that his investment is revalued, but as we said earlier, it looks very unlikely in this system.

There are no clear benefits to obtaining the token

The positive point of getting the token from this project is that you will be able to get discounts and benefits from various companies, working in a similar way to different traditional loyalty programs. The problem here is that we are not clear about which companies will give those benefits to token holders.

On the website you can see logos of large companies such as Amazon, Booking.com or Airbnb but there is no guarantee that these companies are partners of HumanCoin. It could even be said that putting your logos there is a publicity stunt to deceive the visitor, which undoubtedly generates a very negative view of the project.