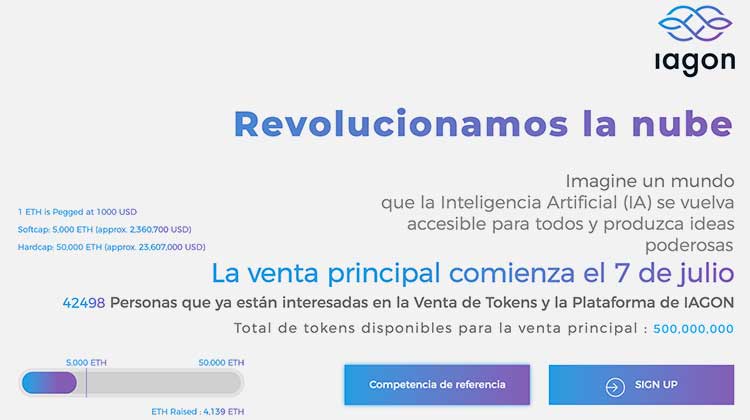 The project behind Iagon focuses on leveraging the Blockchain to create a platform where multiple teams with storage capabilities and processing power work together to create a large Big Data.

Since Iagon ensure that the project is a “Revolution” within the web services of clouds 2.0. Likewise, in its business model, the Iagon development team ensures the success of the process by considering that the cloud services industry moves around 45,000 million dollars a year, a not inconsiderable figure.

In addition to creating a database with the equipment of thousands of users, Iagon also proposes that these data be treated with Artificial Intelligence. With this tool developers plan to analyze all information to predict patterns and evaluate behaviors that may have a commercial interest for companies. In order to maintain this Artificial Intelligence, the capacity of the computers connected to the system will also be necessary.

Having a mega database analyzed and detailed, Iagon plans to offer it to companies, pollsters and other entities interested in information, which would also generate income for the developer company.

All these services will be, according to the developers, offered to the market at a lower price than those that currently exist. The developers assure that they will have a lower price because they will not have to make large investments in equipment since they will use the storage and processing capacities of each of the connected members.

Use of Blockchain in Iagon

The Iagon Database will be fully encrypted and secure via Blockchain. Iagon understands the importance of keeping information secure and has made every effort to make that clear.

Using the Iagon token within the process

Companies that are willing to use the services offered by Iagon must purchase the token in order to pay users who provide their computers for processing and storage.

Users, as mentioned above, will receive tokens for providing the service. By having virtual currencies they can convert them into fiat currency, they can save it, exchange them for other crypto currencies in virtual exchange or they can also use them to pay for services within Iagon.

For each transaction made, Iagon’s developer will be left with 10% to back up operations and establish the system. The other 90% is what will be paid to users who have contributed their equipment to maintain operations.

As part of Iagon’s business plan it managed to have an initial capital of 190,000 euros, which was contributed by the founders. To complete the development of the project the developers have set a goal of 50,000 ETH, they plan to achieve it with the sale of the Iagon token.

From 7 July 2018, the Iagon token will be worth 12 US cents each. Previously, from May 27 to the date mentioned above it had a value of 6 cents since it was on pre-sale. In order to buy them it is necessary to use ETH as payment method.

Iagon developers are located in Hamar, Norway. The team includes more than 29 people, including managers, engineers and programmers. Most of the members of the team have experience both in crypto currencies and in business in general.

The ownership of the company Iagon is divided into 3. With 65% is the company CanPol AS, owned by Navjit Dhaliwal, CEO of Iagon and Bogna Kaczmarek-Dhaliwal, partner without any involvement in the development of the project. With 25% is Elad Harison, who serves as Chief Architect of the project and finally, with 10% of participation is Claudio Lima, who also serves as CTO of the Iagon.

One thing to note is that Iagon has sought the advice of recognised experts within the world of ICOs. We can highlight Nikolay Shkilev, who participates as a Strategic Advisor and has extensive experience as an advisor on other projects. The lawyer Vladimir Niktin also participates as legal advisor of this project and 23 other projects, which has earned him fame in the world of cryptomonedas as one of the most experienced experts in the legal field.

Pros of the ICO Iagon

Data services in a virtual cloud already exist as well as Big Data and Artificial Intelligence, however, Iagon is the only project that unites these three elements in the same platform.

From this union highly profitable elements can be taken out provided that it is known to take the maximum profit of each one of them as well as it will be necessary to evaluate the performance that the 3 elements as a whole can contribute.

According to market studies, the use of Big Data and Data services in virtual clouds are increasingly requested by today’s companies. Iagon can take advantage of this and come in to meet a growing demand. In addition, according to the developers’ own plans, Iagon’s mission is to offer this service at a lower cost than that currently offered by consolidated companies.

Cons of the ICO Iagon

Google, Amazon, Microsoft, IBM and Dropbox are just some of Iagon’s direct competitors within the cloud data services industry. Iagon must enter a market that is already taken over by large, well-established industries that have a large part of the demand covered.

To overcome this competition Iagon will have to invest a lot in marketing and advertising, which undoubtedly involves an expense that, if not handled correctly, could be reflected negatively in the price of the currency.

The use of Artificial Intelligence is not clear.

The intrigue that this generates for us is that the developers assure that Artificial Intelligence will analyze the Big Data that complies with the data stored by the Iagon system, so does that mean that the data that is stored in the Iagon Cloud are not private? This is a doubt that needs to be resolved since people will not want to put their data where there is no privacy.

There are currently 7 other ICOs within the market that are also based on the same main service that Iagon offers, making the competition within the industry even more severe for this project.

However, Iagon already envisioned that and prepared a comparative study to demonstrate to its investors that their project stands out from the rest by including positive elements that others do not possess.