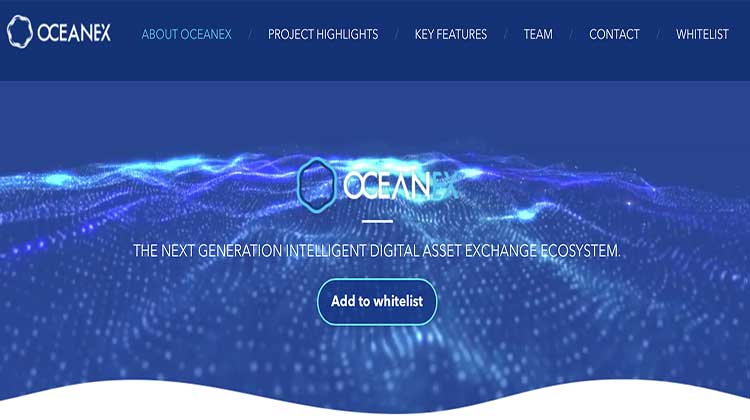 OceanEx is an ICO launched by BitOcean Global that is preparing an Exchange of crypto currencies and asset management within VeChainThor’s Blockchain network ecosystem. In this platform, elements of Artificial Intelligence technology are used to provide very high levels of security, as well as to have sufficient liquidity and capacity to carry out a variety of trading operations within the crypto market.

To differentiate itself from the rest of the Exchanges, OceanEx brings a series of characteristics of its own. In the first place, they determine that they will have a higher speed than standard, reaching a processing of 1,200,000 requests per second. In its platform will be traced operations in BTC, ETH, VET and all new projects that come out in the platform of VeChainThor Blockchain.

In addition to this speed, a unique security is established for this Exchange that uses Artificial Intelligence to armor itself, but in what way? According to what we have been able to gather from the official project profile in Medium, Artificial Intelligence will be used to detect outliers in the flow of user transaction data, to find suspicious trade patterns that correspond to the actions of a hacker. Likewise, Artificial Intelligence is kept watching the platform at all times to verify that the distribution of purchase orders is normal and not diverted by an unexpected hacker attack.

OceanEx will also implement Artificial Intelligence to adapt the size of the server cluster according to the volume of predictive trade by means of automatic data learning processes that are managed by the platform itself within its operation.

Along with this development, OceanEx has prepared financial options for advanced investors who want to take higher level operations. These options are 4 and are called OceanBrain, OceanQuant, OceanMarket and OceanLab, they will be explained here.

This tool will also use Artificial Intelligence, but in this case it will analyze the behavior data of the commercial operations taken by the users. Through the study of historical data, patterns can be sought for the future and with this provide recommendations to users. OceanBrain’s Artificial Intelligence system operates with both pure data and the analysis of human behavior in order to “learn” how to manage operations.

This tool allows users to make transactions with knowledge of market statistics, historical analysis and their changes. Users can also test and simulate operations to measure future performance.

This option offers the possibility to subscribe to specific traders in order to earn transaction fees for high yield investments. All performance information (volume and profit, etc.) of published traders is tracked and historical performance is published online. OceanEx will also show indices that evaluate growth, guide buyers and inform the risks of each investment.

Likewise, the OceanMarket will offer the so-called CryptoBento which is a kind of package that includes a series of virtual currencies that are offered by an entity that seeks to obtain liquidity.

This tool will be used to carry out research and innovation to enable the technological development of OceanEx as a platform. Here you will see incubated projects that will have some kind of link to Exchange or the VeChain ecosystem.

Use of the OCE token within the process

The OceanEx token (OCE) will have a utility within the platform itself and will perform several functions. First of all, the token will work similarly to how KuCoin, Huobi and BinanceCoin work in their respective Exchanges, that is to say, it will serve to pay the rates and tariffs that they establish to make operations in the network.

Likewise, with OCE users will be able to subscribe to Traders who are registered on the platform in order to see their movements and follow them. You can also use the currency to purchase the CryptoBento mentioned above.

Finally, token holders will have the right to vote to participate in the approval or rejection of proposed projects in OceanLab. Such voting power will depend on the number of tokens held.

In total there will be 10 billion ECOs in circulation and 27.5% of this amount will be allocated for sale in a private round (already concluded) and for the round between the community of VeChain, that round does not yet have a start date but, according to information researched, is expected to begin in September 2018. In addition to the 27.5%, there is the possibility that an extra 2.5% will be sold in a special round if the developers see it as relevant for the correct development of the project.  In total, the 10 billion ECOs have a value equal to 15 million TEVs. For the private sale of tokens, a price of 1 VET = 800 ECO was established and for the Community sale, a price of 1 VET = 730 ECO was established.

Another member we should mention is Jiayu Zhou, the person in charge of the technical development of the project who has a wide experience in everything related to Artificial Intelligence and computerized automated learning. Zhou has worked directly with Samsung to apply Artificial Intelligence in the advertising handled on Samsung SmartTV.

Among the advisors of this project we are going to meet Sunny Lu, the CEO and founder of VeChain. There is also CREAM, a company that advises on financial investment in crypto currencies.

Do they own a Minimally Viable Product (MVP)?  No, the developers have not shown a minimally viable product of what will be their Exchange.

We still do not have information from your Roadmap because all complete information will be published by the third quarter of 2018. It will be necessary to follow its official Medium page and its social networks on Twitter and its Telegram channel to have the latest information about it.

Backing of a consolidated cryptocurrency

VeChain is a currency that has a market value in excess of one billion dollars and is within the top-20 of the most important currencies of the crypto market. Having the backing of this currency can give a boost to the project when you have to position yourself in the market as a solid Exchange and need to attract investors.

As we could see, the developers of this project have been linked to cryptomonedas for a long time, which denotes that they have real knowledge about what this technology can and cannot bring to society.

Also, the team shows that they have links with the branches they are trying to include in the project (Artificial Intelligence and CyberSecurity) important to ensure that the development related to these issues will be carried out correctly.

To include Artificial Intelligence for operations analysis and to put that data to consumer services can be a very important differential for OceanEx opposite to other Exchanges and even, could put OceanEx as a referent of all the market of Criptomedas.

Improvements in CyberSecurity levels are also important to bear in mind if we take into account the amount of hacking and security violations that have suffered the Exchanges in recent years. If OceanEx is presented with a more armored product than the competition it will very likely attract investors.

Limited project within the market

OceanEx is very focused on VeChain and although it has announced that its Exchange will also list the most important crypto currencies, we don’t see much effort in opening up to the market. As an example of this disinterest we can see that the ICO will not even have a public offer for all people but will only make an offer for the community of VeChain.

If the project does not show signs of opening, it will stagnate as a subsidiary currency of VeChain and will not develop all the potential it is proposing to offer within the market.

Description: It is a platform launched by BitOcean Global, which aims to operate as an exchange of digital assets within the VeChainThor Ecosystem, and for which they wanted to implement the use of artificial intelligence to ensure security, in addition to a set of tools and investment products.

In this project we can see an interesting and attractive potential for the cryptomoney market in general.  We will also have to evaluate whether the project shows signs of having a life of its own and separate from VeChain because otherwise, we believe it will fluctuate according to what VeChain marks.