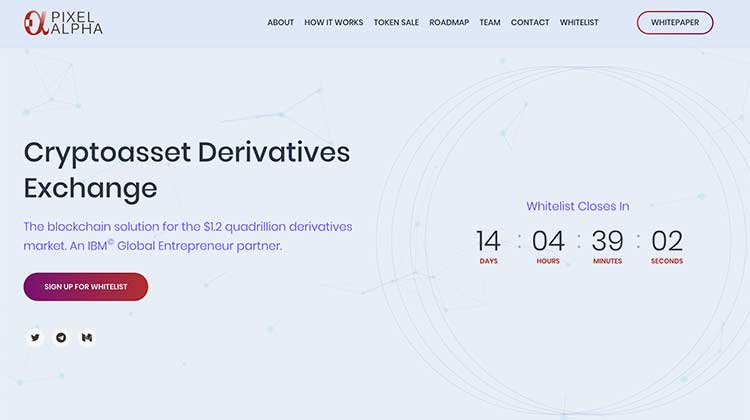 The ICO of PixelAlpha brings us the possibility of having the first Exchange of the most traded assets in the world, the Futures. Being based entirely on the Blockchain network. They propose that it should be the owners of the assets who carry out the operations without the need for an intermediary. In this Exchange you can list anything that has digital representation, can be both the crypto currencies that we have today as any tokenized asset.

The AlphaExchange represents, as the developers say, a new paradigm in everything related to the ownership of the asset, adding the possibility of making operations and transfers without the need for a third party to endorse or secure the operation. Since there are no intermediaries, there are significant savings in the costs associated with them.

To differentiate itself from the rest, PixelAlpha will be based on 3 principles that are:

In addition to these principles, the platform will allow any person or company to build an Smart Contract on any ¨futuro¨, which means that an opening to the market will be given like never before.

Use of Blockchain in PixelAlpha

As PixelAlpha explains in its Whitepaper, it is proposed to create a Blockchain platform that combines both the speed and the current contractual behavior of the Futures Exchange Houses with the cryptographic security of the Blockchain in order to eliminate the need for an intermediary to secure the operation. In order to achieve this objective, they have proposed the use of Intelligent Contracts that establish immutable commands that are complied with according to predetermined commercial terms.

Together the Blockchain network will be used to make the process of tokenization of assets, being able to apply for any type of good such as real estate, sowings, minerals, insurance policies, mortgages or any other type of asset that can be marketed. In this way PixelAlpha affirms that it will be ahead of any other exchange that offers ¨Futuros¨ since only they will have so much variety.

Use of the Pixel token within the process

The currency of this project is called Pixel (PXA) and will be used as the main settlement tool in the PixelAlpha project. Its use is similar to what is used in traditional Exchange Houses when they use “cash liquids” which means that the asset (minerals, oil, corn or whatever has been agreed in the Future) is not delivered directly but that, as agreed, the value of the asset is paid in a universally liquid denomination that is usually dollar or euro. In addition to this, PXA will serve as a pairing for exchanges between users.

It should be noted that the minimum amount they accept per investor is 1 BTC or 5 ETH, being one of the highest minimums within the ICOs of today.

PixelAlpha is based in Hong Kong and consists of only 3 people and 2 advisors. A really very small team but raise the possibility of adding more people in the future.

Members include Kouichi Otsu, the CEO of this project who has significant knowledge in large-scale business technology development. He developed in the past a recruitment system that has served to improve the processes of many companies.

We are also going to meet Richard Kane, another of the co-founders of the project who has a lot of experience in researching the application of Artificial Intelligence in the investment processes of Commodities and Futures, being even a participant in important processes of adoption of this technology in large Exchange Houses in New York.

The latest member is William Twining, the project vice president and StarUps development veteran in the Asian market. He has a lot of experience in everything related to the development of digital businesses and in the adoption of new technologies by large traditional companies.

We can also see among his advisors Adrian Facini, who is part of Exchange IEX and has high experience in applying new technologies in traditional Exchange Houses. In fact, it has helped in the application of new processes to agencies as important as Merrill Lynch.

Do they own a Minimally Viable Product (MVP)?  According to their Roadmap they do have an MVP but when we go to find out what it is about we only find a video where they show how it will work in the future. There is no way for the user to see for himself the actual operation of the platform.

Regarding your Roadmap we will find a simple planning and even could be said short because of the little specification provided. By November 2018 they expect to have the AlphaExchange ready for the public and by January 2019 they expect to be able to market more than 1000 ETH per day within their platform.

Futures move a lot of money into the investment market, reaching billions of dollars in very short periods of time. If it is possible to manage those operations with the Pixel token, it could generate a high demand of the asset because the amounts of the transactions are really high.

If such a demand for the asset arises in the face of a limited supply, it is natural that its price rises, a very positive aspect for anyone who is an investor in this project.

Cons of the ICO PixelAlpha

No marketing or sales plan

Reading the entire Whitepaper we could see that there is no mention of a sales plan or a marketing plan geared towards product adoption anywhere. How do you expect your product to be successful without those plans? Markets are not only convinced by numbers or equations that are very difficult to understand.

Without an adoption plan for the future, it is impossible to ensure that the project can succeed and it seems that the development team has not taken it into account.

The problem here is not only how small this team is (3 people) but, doing the research of this ICO, we were able to observe that this project is still searching for staff on Internet pages. What planning can this project have that has come to the ICO without the full staff? It is a really negative indicator and leaves many doubts about its seriousness.

The issue here is that they plan to launch the AlphaExchange in November, but in what time will the newly hired programmers work? Can they program in just one month an Exchange with functions as complicated as those explained in their Whitepaper? These are questions that we must ask ourselves in view of the lack of clarity that we see here.

Along with all the elements mentioned, we will find that this team is asking for one of the highest minimum investment of all the ICOs that exist in the market.  They even claim that they have no restrictions on the origin of contributions and that investors have full responsibility before their different jurisdictions, this is atypical since the consolidated ICOs take great care not to trade in prohibited jurisdictions so as not to have legal problems.

To show a video about how a product works is not to have a minimally viable product and that does not give any kind of security to investors. In fact, by the time they plan to launch the AlphaExchange, the MVP should already be public and allow users to try the demo that eradicates the doubts and brings more certainties.

Description: It is a project that aims to make room within exchanges, offering economic transactions, inviolable security and above-average speed. All this supported by blockchain technology.

This project leaves us with serious doubts about its functioning and veracity. Despite the fact that a good idea arises in a market that handles a lot of money, this small team does not seem capable of developing something as complex as what is proposed in the Whitepaper.