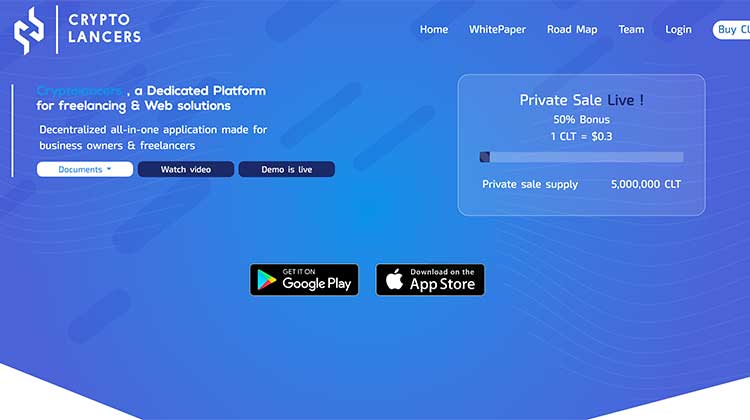 The world of remote work has grown significantly and at such an astonishing rate that it has gone from being something of a minority group to being the source of work for a large part of the active population within the economy. However, the current operation of the platforms where the demand and supply of these works can be managed has presented certain faults, so it is necessary to present solutions that make this work experience something simpler and more efficient.

Cryptolancers is presenting an ICO with a decentralized solution that helps both freelancers and business owners who make use of the services of these workers. This platform, which will operate with decentralization as its north, will be based on Ethereum and will use the technology of Smart Contracts to regulate relationships between freelancers and customers.

With Cryptolancers, Developers seek with Cryptolancers the goal of streamlining transactions within online labor relations. These transactions seek to be, in addition to agile, totally secure and without the need for an intermediary, all thanks to the application of Blockchain technology within the peer-to-peer process.

With this process, developers hope to help freelancers in the marketplace to avoid problems with late payments or the situation of customers reluctant to pay for work done. According to the developers, workers will receive their pay immediately upon completion of the jobs requested, offering a different model to that currently prevailing on other platforms where workers must wait a certain amount of time to receive their pay.

Similarly, they seek to satisfy clients by offering qualified professionals at the lowest possible cost, since the commission that will be charged at Cryptolancers for the provision of their services is among the cheapest that can be found within the market.

In spite of being a platform that seeks decentralization in the freelance world, Cryptolancers will present itself as a trustee between clients and freelance workers to intervene when there are disputes in the labor relationship. The platform will also offer live support to help platform users (both customers and workers) with any problems that may arise.

Use of Blockchain in Cryptolancers

The developers mention that the platform will be totally decentralized and for this they will implement Blockchain technology in various sectors and functions of the website. First of all we must outline the use of Intelligent Contracts to regulate the relationship between customers and employees. With these contracts both the client and the employee are guaranteed that there will be no fraud within the relationship.

The Ethereum Blockchain will also be implemented within the system for the issue of worker reviews. As explained, each review will be stored within a chain of Ethereum blocks and will be available to anyone who wants to view the worker’s work history.

This reputation of the worker will be linked to a management of Ethereum that cannot be modified later, in this way the developers want to to avoid that the system is mocked  and that all the information of the worker is focused on a single place, an issue that makes it easier to search for customers who are requesting the services of a professional.

According to the Whitepaper, the CLT will serve as a payment method within the platform. All payments will be made in CLT, which infers that workers will receive these tokens because of the services performed.

On the part of the CLC, it will have 100 million tokens issued and will be managed and governed by the developers of the platform. Among the explanations given by the developers, it is understood that this currency will be in the future the way in which customers will pay to hire workers.

Finally there is the CLCC, the currency that will function at the beginning of the project as a form of payment for customers. The White Paper explains that the only way to obtain CLCC is through the CLCC/CLT exchange.

The project developers have decided to issue 100 million CLT tokens and are offering them for sale for a price of 1 CLT = $0.498. The minimum target that this project is hoping to collect is $2 million and the maximum has been set at $20 million. To achieve this goal developers are accepting payments in ETH, BTC, LTC and DASH.

The ICO is taking place in the UK jurisdiction and consists of 10 developers and 8 advisors.

Outstanding members include CEO Nadjib Bouhaddi, a freelancer who has worked with such large companies as AirBnb, Youtube and Amazon.

The CFO of the project is Mahdi Mohammedi, a programming expert who has previously worked as a freelancer as companies like Ooredoo.

Oussama Menidjel is the COO of the project, a brand expert man who will help this project plant itself within the industry.

Among the consultants we can see Giacomo Arcaro, one of the most influential people in Blockchain technology in Italy and Europe. He has previously worked as a consultant with several ICOs worldwide, being successful in many of them.

Do they own a Minimally Viable Product (MVP)? They own a demo of the platform.

Solution for a growing commercial sector

Freelance work has been growing a lot in all parts of the world, both underdeveloped countries and countries of the first world, which are turning to a system of work much more comfortable and in which all parties are benefited. This situation has caused this commercial sector to grow at a good pace, both economically and socially.

This growth in the freelance modality has occurred despite the negative aspects of the large online work platforms, which indicates that the thrust of the sector is advancing despite the problems. The fact that Cryptolancers enters this very fruitful sector with proposals to solve several of the existing problems, has considerable advantages that can be exploited to consolidate as a successful online working platform.

Error in the distribution of tokens

Doing the respective analysis of this project we could see that there are certain inconsistencies in the presentation of the numbers respective to the distribution of tokens. According to the Whitepaper, 55% of the tokens will be distributed in the ICO, which is equal to 55 million tokens. For example, it is expressed that 48.5% will be earmarked for public sale, which translates into 26,675,000 and not 22,500,000. An important calculation error may reside there.