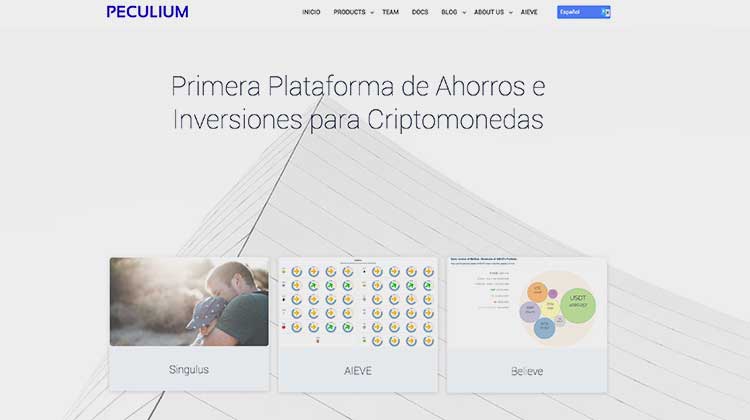 Peculium presents the first savings management platform using Blockchain technology and Artificial Intelligence. Its system seeks to adapt to the needs of people and provide solutions which are accessible to all people. To achieve this the developers are based on the offer of 4 elements:

Self-managed savings allows people to manage their savings on their own, Peculium gives users the ability to invest and increase traditional savings on cryptocurrency-based projects.

To make the mentioned above a reality, the ICO Peculium was born, with which the developers present the creation of AIEVE, a financial advisor that uses Artificial Intelligence to apply a masterized risk management algorithm, diversifying and improving investments, thus obtaining a more secure risk-benefit ratio for the user. This Artificial Intelligence will be operated thanks to the fact that the project will use a Super Computer with high capacities.

Peculium has self-management options for companies and large institutions as well as for individuals. For people Peculium has “SINGULUS”, a space where people can manage their assets on their own or delegate them to intermediaries or partners so that they can keep the accounts. For companies they present “ALTERUS”, an Intelligent Contract that will work with AIEVE to provide interesting options for large investments for companies.

The platform also provides a savings tool managed automatically with AIEVE by means of the Intelligent Contract “SOLIDUS” that works with AIEVE for the automatic management of savings according to what the saver establishes. The machine operates according to the risk capacity, the amount of money it has, the movement of the markets, etc.

As can be intuited in the introduction, this project will manage the investments of savers in the cryptomarket. In order to carry out its investments in this field, it will use different Blockchain technology tools that allow operations to be executed in a safe, transparent and reliable manner.

Specifically, Peculium will use the Smart Contracts of Ethereum’s Blockchain network. The developers expect with these contracts to give transparency, infallibility and decentralization.

The management of the assets by means of smart contracts allows to operate with predefined and exact terms. Intelligent contracts automatically provide the profits at the end of the time period that the saver determined at the beginning of the contract. All this without the need of an intermediary who charges a commission for the transaction.

The Peculium token (PCL) has been defined as a useful token for accessing the services provided by the platform. To acquire AIEVE’s tips and access to the platform’s premiun services you need to pay with the PCL token.

In addition to the usefulness of the token, the holders of PCL tokens will also receive part of the profits of the company Peculium, in the Whitepaper it is specified that 20% of the profits of the company will be distributed among the users. These profits will be generated from the payment that must be made to access the services offered by AIEVE. All token holders will receive according to the amount of tokens they have in their registered virtual wallets.

The ICO of this project has already finished but we are currently in a modality called “Continued Coin Offering” (CCO). For this modality they are selling 11 billion tokens, 55% of the total of 20 billion tokens that the project has.

This Continuous Offer is then extracted from the ICO to obtain liquidity and complete some technical elements of the project. In the ICO stage the project collected 9,917,634 dollars, a number somewhat far from the maximum of 200 million euros that were being proposed at most from the beginning.

With the CCO the team raises the collection of 110 million euros establishing a price of 0.01 euro each token. This offer is only open to large investors as it requires a minimum investment of 100 thousand euros.

Peculium is located in France and its core team is made up of 59 people from different countries and separated into different production and development departments.

Its CEO is Rashid Oukhai, a Big Data management expert who previously worked as CEO at UpsilonData, a company that analyzes Big Data to provide information to companies and businesses.

Florian Rais is the Commercial Head of the project and has experience in the world of Blockchain investments as he was part of the Hybridblock board of directors and has also been an advisor for many years for investments in the world of technology.

The Data Director is Abed Ajraou, a technician with extensive experience and computer knowledge for handling and structuring large data and application of Artificial Intelligence in data analysis. It is the mind that was behind the creation of AIEVE and its application within the Peculium platform.

Date on which the CCO ends: According to the Whitepaper, the CCO was to be carried out for 5 consecutive months and according to the Financial Data of the Project, the CCO would end in July 2018. However, on the project’s website they tell us that the investment process is still open.

Do you have a Minimally Viable Product (MVP)?  On their website they already indicate that SINGULUS and ALTERUS are fully developed. However, if we enter their website we see that they are still in beta stage and are only available for the selected investors they choose to see.

As planned in the project Roadmap, Peculium would be fully ready by June 2019. For the last quarter of 2018 they plan to launch to the public the applications of the platform in iOS and Android. Already during the year 2019 they will begin to test and execute the Artificial Intelligence analysis in the Super Computer of the project.

The Roadmap that was proposed in the project (at least the one that appears on its website because in the Whitepaper this information does not exist) has been respected by developers and have shown that they have been working hard to achieve the goals set.  The small samples they give of the applications, although not completely available to the public, show very good progress of the project.

The PCL token is listed on HitBTC, one of the most important Exchanges in the crypto-money market. It is also listed on IDEX and Hotbit. According to CoinMarketCap data, the currency has a good daily market volume in excess of one million dollars between all exchanges, which is an interesting amount for a token that has so little time in the market.

Cons of the ICO Peculium

By setting a minimum investment of 100 thousand euros opens the possibility to create whales within the market. With the accumulation of tokens in a few portfolios opens a great possibility of a completely unstable and extremely speculative market for small investors. Judging by the volume of the daily market, any movement of an investor who owns 100,000 euros in tokens can represent a complete setback.

Poor valuation of the token in the markets

According to CoinMarketCap data, the maximum valuation of the token was reached in May and was for a value of 0.007102 dollars, an amount far removed from the initial 0.01 euro that was sold in the ICO and is also proposed for the CCO.  In the month of August the token is quoted between 0.0023- 0.0025 dollars each.

Why does an investor have to go to buy in the CCO for 0.01 euro when he can go to an Exchange to buy it for much less? It is something that the project does not seem to clarify much since the only forecast they make (you can see the CCO plan here) is in case the token goes up in price.