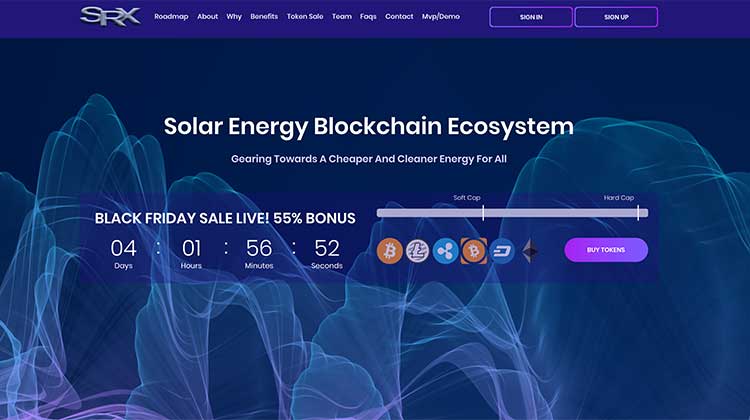 We are in the technological era and thanks to the great advances we have managed to improve our living conditions, it is not surprising that this technology is also applied in proposals involving renewable energy. Such is the case of Solerix, which proposes a plan to improve the current electricity system in countries with less production and sustainability.

What is Solarex ICO?

With the idea of using Blockchain technology in the implementation of a new model of energy generation through sunlight, was born the ICO of Solarex. This project aims to apply Blockchain technology, Smart Contracts, Artificial Intelligence, Internet of Things, solar farms and photovoltaic systems on roofs thus implementing a model that improves the electrical system.

Solarex is a platform that wants to propose cheap, non-polluting, efficient and sustainable energy for anyone. As explained by the developers, Solarex intends to reinvent the energy market mainly on the African continent, where the countries with the greatest deficiencies in electricity production are located.

This new model seeks to give users the opportunity to be part of the energy market. As mentioned by the developers, it is proposed to have main sources of energy in the different villages, which will be supported by “solar farms”. The producer of this energy will have an intelligent counter that will calculate the energy generated and consumed leaving it reflected in an smart contract within the Blockchain network of Solarex.  These contracts will also include the consumers of the electricity production system.

Apart from the solar farms, there will also be consumers with solar panels incorporated on the roofs of their homes. These panels may be purchased or leased through lease plans offered by Solarex developers.  These consumers who have built-in panels will be able to sell their surplus energy to other people through an energy trading platform that will run peer2peer.

As mentioned above, Solarex will use Artificial Intelligence technology, which will serve to gather information about the consumption of users so that subsequently these data are useful in the construction of an electrical system that meets the real needs of people.

The Internet of Things will be implemented to allow the total integration of the elements of the system. There will be devices to measure the use of energy that will work with this technology allowing real-time data about the process of production and distribution of electricity. It is hoped that with this data, problems within the system can be identified and solved in near real time.

It is expected that the implementation of this set can build the smart meter that provides reliable information to manage energy more efficiently and thereby reduce costs and logistics that currently exists.

The final vision they have at Solarex is to become the largest supplier of electrical energy based on Blockchain technology. They will start on the African continent, specifically in Nigeria, but hope to grow to offer a global service.

Use of Blockchain in Solarex

The implementation of Blockchain here is proposed to record transactions and energy consumption/production data in a framework of traceable, reliable and invulnerable information. The developers of Solarex want to propose a process that avoids corruption and fraudulent acts linked to the systems of production and consumption of electricity.

In addition to achieving better control over transactions, having all the data within a Blockchain network can also improve the monitoring and supervision of production, thereby detecting failures or what needs to be improved within the productive ecosystem.

Blockchain technology will also be applied to the Solarex Smart Meter, an intelligent meter that will work with Artificial Intelligence and the Internet of Things. This device will allow to maintain a balance between the electric charge and the recharge that the users do. When users have no funds in their account, they must recharge or the meter will cut the service. To keep up with all the meter information, users can synchronize the meter with the Solarex mobile application available for their mobile phones.

Finally, Blockchain technology will be implemented to establish Peer-to-Peer trade between users who generate energy and users who demand it. The Smart Contracts that are established within the Blockchain network allow to create a system in which all can participate and everything within a maximum security.

The developers explain that with these Intelligent contracts will be able to streamline logistics processes and reduce costs in the process because this tool allows the amount of electricity agreed between the parties is delivered and charged in real time. Everything in an automatic way, without intermediaries and with complete confidence.

Use of SRX token within the process

Solarex  proposes a utility token with standard ERC20 within the Ethereum network that will work in the ecosystem for the purchase and sale of electricity. The developers say that with an international token it will be possible to make payments allowing the electric energy to be recharged from anywhere in the world.

Aside from using the SRX token to purchase solar energy, it can be used to purchase other products and services within the Solarex energy market. The project hopes to link up with local solar producers to integrate them into the token network. The token will also serve to encourage the creation of solar energy projects as it will have an option for financing projects in the same line of development.

For this project the creation of 2,400 million tokens is planned and 1,344,000,000 tokens will be allocated to the ICO, 56% of the total. The price that has been set for the token is 5 cents and they expect to raise a minimum of 5 million dollars and a maximum of 65 million. To buy the token developers are accepting BTC, BCH, ETH, XRP, LTC, DOGE and dollars.

The Solarex ICO is being developed in the UK but at the same time is a project carried out by the Blockchain Research Council of Africa.  The team behind the project consists of 15 members and 7 advisors. 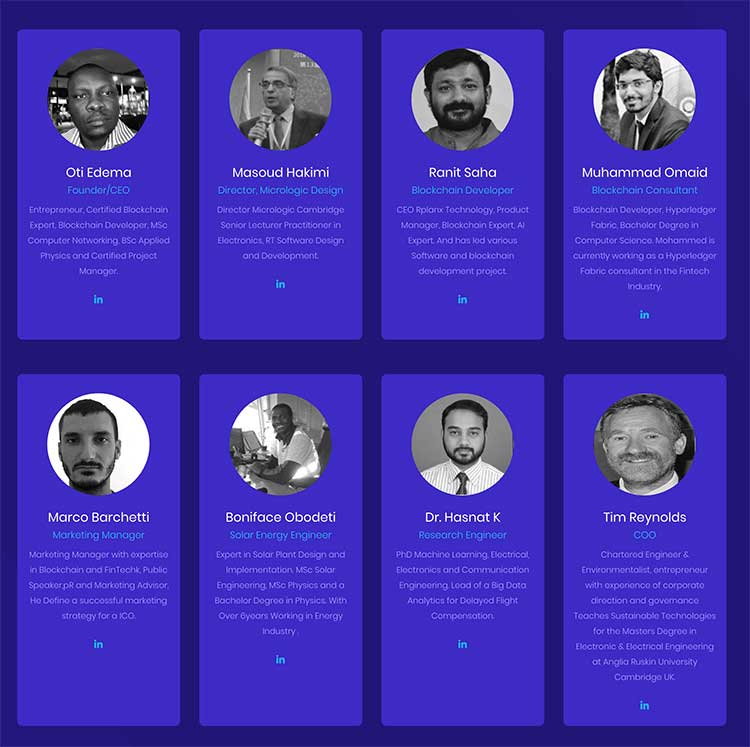 The CEO of this project is Oti Edema, a technician specialized in Blockchain technology who has worked both in the world of cryptomonedas and in that of the ICO as an advisor to various projects.

Tim Reynolds will be the COO and will bring his engineering and environmental expertise to assist in the construction of an electrical production system that is both efficient and environmentally friendly.

Among the advisors we can find Alex Linenko, a recognized expert in the world of crypto coins. He is one of the founders of ICOyard.io and has been an advisor to several projects within the ICO world.

Do they own a Minimally Viable Product (MVP)? No, they’re still developing this part to show to the public.

According to the Roadmap they present, the project will be completed by 2020. In the first quarter of 2019 they expect that the ICO will have concluded, that the token will be listed in Exchanges and that both the mobile application and the web platform of the project will be completely ready. By the second quarter of 2019 they will acquire the solar equipment and panels and install them in Nigeria. Already in the third quarter of 2019 will integrate Blockchain technology to the project and put into operation the smart meter. Already in 2020 they hope to expand globally.

The complex situation of electrical energy within the African continent is a tangible problem that has been tried to solve for many years. Solarex proposes a solution that in theory seems quite effective and is also an idea raised and developed by a team that knows the area where the project will be executed.

While it is true that it will be necessary to extrapolate that need to a solution that involves a high demand for the SRX token, by the way they are approaching the project, it is possible that this link is achieved and thereby achieve a very high demand for the token.

In the Whitepaper we are told that there is a program of burning coins until only 300 million of them remain in circulation, which means that there will be a constant demand to buy the token. These programs are beneficial because they maintain the token trade and also produce a deflationary effect on the token price that is beneficial to those who purchase it as an investment.

The current market has been really complicated for the ICO, which has generated that this method of fundraising is not reporting the money needed by the projects. What the ICOs have been able to collect in recent months shows us that a hardcap of 65 million dollars is a fairly challenging target for current market conditions.

Description: Solarex proposes to create a solar electric system with implementation of Blockchain technology, Artificial Intelligence and the Internet of Things to try to solve the problem of electricity on the African continent.

It is difficult to find an ICO today that is focused on solving a problem as serious as that posed by Solarex, which makes the Solarex proposal in some way special. Solving a situation as complex as the shortage of electricity and using a token in the middle of that process can imply a strong demand for that currency and therefore have a positive impact on the price of the asset, which is attractive to any investor.