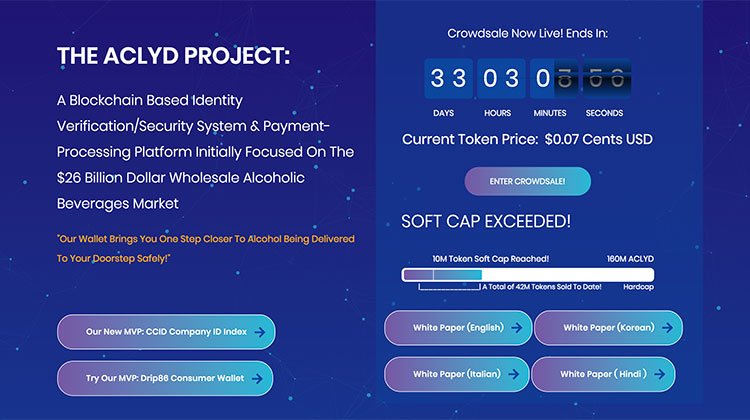 Aclyd presents a new method of payment for alcoholic beverages using Ethereum’s Blockchain technology, the goal is to make the purchase of alcohol at home a reality.

Thinking about giving solution to the above, the developers of the ICO of ACLYD have proposed the creation of an intelligent virtual purse that allows the peer-to-peer transaction in a fast and effective way, as well as the possibility of applying a more effective KYC through Blockchain to restrict the sale of alcohol to minors and other people who are not qualified for consumption, thus providing greater control and security. However, in the relevant investigation, it was found that the company does NOT license the sale and distribution of alcoholic beverages throughout the United States.

In addition to the purse, ACLYD’s Blockchain platform will have the application of the Ethereum network’s own Smart Contracts. According to what developers explain in the Whitepaper, the application of Intelligent Contracts will begin to regulate contractual relations between Tequila producers in Mexico and distribution companies in the United States. The developers explain that the use of intelligent contracts will have greater control over any element or situation that occurs and conduct operations more transparently and effectively.

These tools will form ACLYD’s platform, a space that will function in a decentralized manner to make payments within the process faster. With these elements the developers of the project hope to be able to solve the problems present within the trade of alcoholic beverages, especially to allow this industry to take its products at home.

Use of Blockchain in ACLYD

As we mentioned before, the project will have a Smart Wallet that will allow the application of KYC processes for the use and acquisition of tokens, with this they seek to control and limit the access of tokens to those people who are not qualified to consume alcohol. All that information will be kept on the Blockchain network to ensure that the data is not breached, forming a reliable database for alcohol distributors and sellers.

This purse will also have more complex security levels than those seen in the daily market, as it will have a process of voice and image verification, will serve both to ensure the maximum KYC and to protect the tokens stored in this Wallet.

The application where the whole system will work will be a decentralized application that will allow users to create intelligent contracts easily and quickly. They will specify what goods and services are being paid for and any important elements within the transaction. These Contracts will be executed automatically and will allow payments between suppliers, distributors and producers to be much more efficient and quicker.

Use of  ACLYD token within the process

This project will feature the ACLYD token, a coin developed in Ethereum using the ERC-20 standard. The ACLYD token will be the main currency with which all the tools presented will work. The developers hope that this currency will become universal in order to facilitate trade between producers-consumers who do not share the same FIAT currency, as in the case of Mexican tequila producers and U.S. consumers.

For the acquisition of these tokens it is necessary the approval of the KYC process implemented in the Intelligent Wallet, controlling also the use of them.

For this ICO, a price of 7 cents per Aclyd token has been established, with a minimum of 10 million tokens and a maximum of 160 million, the latter representing 65% of the total amount of tokens already issued. To have the figures in dollars, the minimum is 500 thousand dollars and the maximum is 10,202,500.

How method of payment the team is accepting ETH, BTC and LTC. The team also explains in its Whitepaper that they are accepting Agre Coin, a currency that is linked to the ACLYD project. The monetary ratio they are using to accept Agre Coin is 10 Agre Coin per 1 Aclyd.

The company behind ACLYD is located in Bermuda and has a team consisting of a total of 4 developers and 9 consultants.

Among the members to emphasize we have the CEO Jessica Contreras, an entrepreneur who besides being in charge of ACLYD is also behind Agre Coin. This woman is closely linked to the alcohol sales industry and owns her own alcohol sales company called Fuego Fino.

The CSO is Shahid Chishty, a man who has been in the investment world for many years both as a fund manager and advisor to major projects.

The Marketing Manager of the project is Kanisha Dennis, an expert in market research and audience analysis who has already worked in different companies. He also has experience in public relations.

Among the advisors is Saeed Hareb Masood Aldarmaki, the Director of Binary Financial and a man experienced in everything related to the world of risk investments. He also has experience in the world of crypto coins as an advisor for various projects Blockchain and ICO.

Do they own a Minimally Viable Product (MVP)? Yes, the MVP they show is a preview of their Smart Virtual Wallet.

Present a minimum to collect quite low

500,000 dollars is a very accessible amount for today’s ICO market, so the team has already raised that amount, which represents an assurance that the project already has to start the minimum guideline. In addition, with the pace of the project, it is very likely that investors will get significantly higher amounts, which provides some security for the proper development of the project.

Industry that moves a lot of money

Alcohol is one of the most consumed products within the entire planet and it represents a billion-dollar money movement. ACLYD comes up with a proposal that can take this million-dollar industry to another level by allowing the purchase of alcohol over the Internet and delivery to the consumer’s home.

Assuming ACLYD achieves a partnership with an online giant and allows users to buy alcohol from the comfort of their own home, it would make a real impact within the industry that would represent an unprecedented, high-caliber economic movement.

Little linkage of the equipment with Blockchain technology

Members of the ACLYD team seem to have little connection with Blockchain and cryptomedas, which would result in an inconvenience for the development of an ICO and the creation of a cryptomeda. We have noticed that both the Whitepaper and the website do not specify much about the Blockchain technology that will be implemented in the project.

Contradiction with the principle of anonymity of the cryptomedas

One of the principles of cryptomoney is anonymity, if we analyze this project, the KYC process would eliminate any kind of anonymity and makes a centralized entity (the one in charge of evaluating that the person meets the requirements to make transactions with the token) have all the information of the users and holders of the token.

This situation could generate some rejection within the crypto-money community, especially for those who are more believers in the fundamental principles of virtual currencies. The reaction to the future will have to be evaluated.

The initial process of this project is expected to take place within the United States, but we were able to verify that they do not have authorization from the Alcohol, Tobacco, Firearms and Explosives Agency or the Alcohol and Tobacco Trade and Tax Agency of the United States beyond Arizona. These entities are very restrictive and in the event that processes are carried out without authorization, the legal consequences are really considerable.