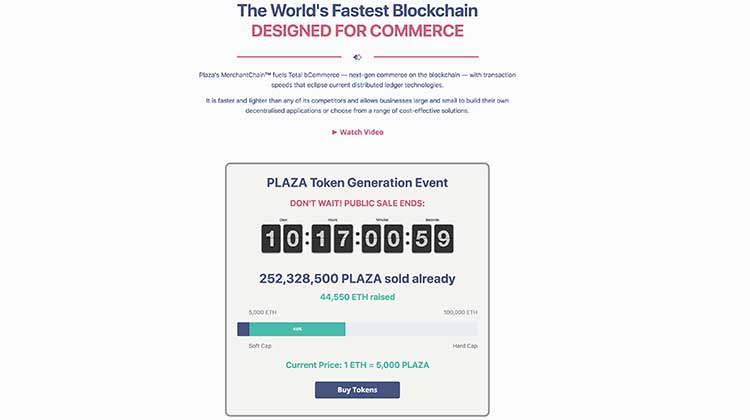 Fifteen years ago e-commerce was a chimera in which very few people were involved. Today the reality is completely different, the largest companies in the world are Amazon, Apple, Facebook and company, companies that are exploiting the maximum Internet commerce and has led this industry to move more than 2.30 billion dollars in 2017 alone.

However, these industries have grown at the expense of digging up people’s privacy and after a long time of enduring it, users are tired of feeling invaded. In addition, the costs of using centralized platforms greatly increases expenses within e-commerce. In response to this situation was born Plaza Systems, an ICO that is shown as a solution to achieve freedom within online commerce.

What is Plaza Systems ICO?

In the CEO’s own words, Plaza.Systems wants to offer privacy, security and savings in e-commerce through Blockchain and Artificial Intelligence. How will you achieve this? As explained in the Whitepaper, they will offer a series of tools that will be very useful and will change what is already established today.

As the Whitepaper also mentions, Blockchain technology has shown us two realities of the centralized system of online commerce, users’ information is being abused and high fees are being imposed without justification. However, the use of crypto coins within the online market has not reached its maximum capacity due to various limitations: it is complex to use, there are not enough options to spend, lack of adoption by a large number of the public, very volatile coins, and so on.

To solve this, the developers of Plaza Systems believe that it is necessary to present an interface that is simple to use and that anyone, without having to know Blockchain technology in depth, can understand to make their purchases within e-commerce. The first solution they are thinking of is the PlazaCard, a card that can be held both in physical and virtual format and will allow PlazaDollars (PL$) to be spent in any store.

They also offer an intelligent Speaker called “Plaza Concierge” that in addition to serving as a personal assistant will also allow mining in the Blockchain network of the project in a simple way and without the need to know programming. All this mining will be done inside the Blockchain MerchantChain, a system created by the developers.

This entire system will work within PlazaMarket, an e-commerce platform based on Blockchain technology. This PlazaMarket will have added the “PlazaChatbot Metasearch”, a search engine that will use Artificial Intelligence to offer a better shopping experience to customers within the web space.

To resolve conflicts and disputes between merchants and customers, the platform has the PlazaArbitration, a decentralized dispute resolution center in which external arbitrators will work to resolve any inconvenience.

All this is offered while fully maintaining the privacy of customers. The system only identifies vendors that participate within the platform because consumers need to know the data and the services or products they are offering.

Use of Blockchain within the process

The developers state that they will use Blockchain technology for various functions within the system. First they state that transactions with the PlazaCard will be processed through the standard processing system used by debit cards, then the transaction fee will be validated by MerchantChain.

The Blockchain chain of MerchantChain is a network that works with PoW and that works with the Protocol SHOUT (Simple Heuristic OUTbound), the same has been tested in stress tests and has achieved a number of up to 15 thousand transactions per second, a very high number compared to the rest of the crypto currencies that work within the market.

The Intelligent Contracts that are used within MerchantChain are easy to use for merchants and buyers since the developers have prepared a series of templates that allow them to be implemented without the need to know about Contract programming. These Contracts will work to secure payments as collateral deposits in the middle of the business relationships that are presented within the platform.

For this project the developers are implementing 2 currencies within their project. They will have the PLAZA utility token and at the same time will have a “Stable Coin” called PL$, the latter will be backed by FIAT money.

The PLAZA utility token is an Ethereum ERC-20 standard token and will function, according to the developers, as a controller for the Plaza.Systems system. According to the scheme shown by the developers, PLAZA tokens can be used to pay for services and products in the PlazaMarket but will not be the only method of payment. The token will also be used to pay miners who use the Plaza Concierge to maintain the MerchantChain.

The PL$ or “PlazaDollar”, is a currency that is backed by American dollars that, according to the developers, are held in reserve of the project. Coins are issued or destroyed depending on the amount of dollars within the company’s reserve.

The PL$ will be used among customers and merchants. With this currency it will be possible to use Intelligent Contracts so that they function as Guarantee Deposits in the relations that sustain both.

The developers have established the creation of 960 million tokens and the ICO will sell 624 million tokens, 65% of this total, at a price of 5000 PLAZA per 1 ETH, although in the pre-sales offered a cheaper price for reasons of bonus. The objective they hope to achieve with the ICO is set at 100,000 ETH and to achieve this they are only accepting ETH as a payment method.

Plaza Global LLC is the company behind the ICO and is located in the jurisdiction of Singapore and has 8 developers and 6 advisors.

Among the most prominent members we can see Kevin Johnson, the CEO of the project. He is a computer scientist with years of experience within Sillicon Valley and has worked on many interesting computer projects.

Tracey Allan Powell, a man long associated with banking and business in the United States, will be the COO of the project.

The Head of Marketing for the project will be Michael Sinclair an entrepreneur who has founded companies and who has also served as an investor in several technology Starups that have been emerging between the United States and the Philippines.

Among the consultants we can find Maksym Vysochanskiy, one of the most influential people in the ICO market and who carries out the BTC TV online program, one of the most famous spaces in the cryptomundo.

The developers who are carrying out this project are people linked to the world of technology and have many years working on the idea they are presenting in Plaza Systems. In addition, many of them have experience in the business field, which gives us security about how will be the direction of the project when it is running.

Market with a lot of money

Internet trading is currently handling a lot of money and all the indicators show that it will continue to earn for many years to come. Hundreds of investment experts assure that the money will continue to flow into this sector and if we consider the reinvention that Plaza Systems is presenting, we can think that it will definitely be an idea that will gain weight within the market.

Solutions for the cryptomoney market

The SHOUT Protocol can be a very good solution to the crypto-money market and the fact that you have managed in a stress test to process about 15 thousand transactions is impressive. In addition, the idea of using a hybrid model of Stable Coin with a Utility Coin can generate an important adoption for people who do not know how crypto currencies work and do not want to be involved in their instability.

Cons of the ICO Plaza Systems

While it is true that online commerce handles a lot of money, it is also true that it is a highly competitive industry. Amazon is a giant that is leaving fewer and fewer spaces and at the same time Shopify and Magento are capitalizing heavily on small traders.

Plaza Systems has in front of it a titanic work if it tries to change the realities of the current market. They will have to work on both marketing and advertising as well as innovation to demonstrate that their solution can greatly help the online marketplace.