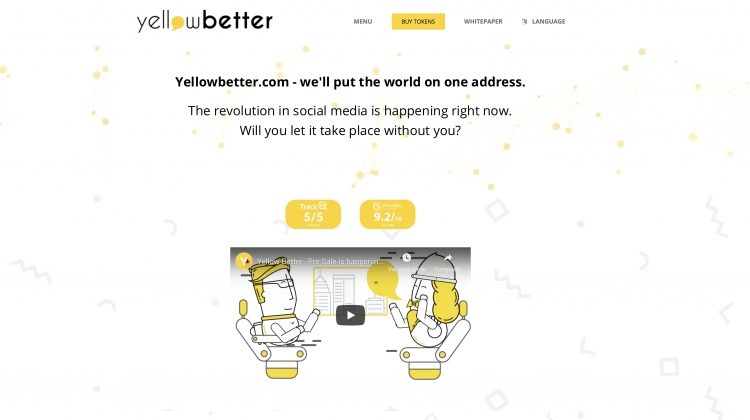 As the world becomes increasingly globalized, learning another language beyond one’s native tongue has become a very urgent need for much of the population. Hundreds of institutes and language schools have emerged throughout the world to meet this need, even have been adapting to new technologies through teaching with the e-learning modality.

However, many say that the teaching of a language must encompass more elements of the culture from which the language comes, and this cannot be taught in institutes. To include these elements the idea of Yellow Better was born, a web space that hopes to become a global meeting point.

What is the ICO YellowBetter?

YellowBetter is designed to “put the world in one direction” by creating a global community of language learners and teachers from all over the world. The entire teaching system will be provided on-line, but unlike the other offers on the market, students will be able to choose their teachers according to a series of filters and specific geographical elements.

On the YellowBetter portal students will be able to choose their teachers according to age, gender, tastes, interests, geographic location and many more specific elements that allow students to learn with someone of their particular interest. The teachers themselves will determine the number of hours they will be able to teach within the platform. All lessons are taught privately, thus ensuring that students have a unique and particular treatment.

Teachers will be free to set the hourly rate for their class. In addition, teachers will also be free to prepare the course according to their knowledge and interests. Students will have a wide variety of options to choose from to suit their budget and tastes. The teachers will be evaluated and ranked by their students, thus obtaining a series of points that will expose them to the market so that customers can know the quality of the teacher.

In association with YellowBetter is the payment processor BetterPay, an application that aims to apply Blockchain technology to the tourism industry. BetterPay will receive 20% of the total tokens and 5% of the total money collected at the ICO and, according to the Whitepaper, will use this money to acquire tourism-related web portals and to have liquidity within the market. BetterPay will also serve for everything related to the exchange of FIAT currency or other crypto currencies for the token of this project.

Use of the Blockchain in YellowBetter

In addition to the implementation of the payment method with the token that is being generated in this ICO, we can see the Blockchain technology within YellowBetter in an evaluation and ranking system that will work in a decentralized and secure way. This evaluation system will first be applied to measure the teachers who deliver their lessons within the YellowBetter platform.

In addition, Blockchain technology will also be implemented so that teacher-student relationships are maintained independently and without the need for an intermediary to be involved. This element makes us suppose that Smart Contracts will be applied to regulate the whole payment process that can exist between both figures.

The token of this project is called YBT, it is in the Blockchain network of Ethereum under the ERC-20 standard. This token will be the only and exclusive payment method within YellowBetter. All payments made with this token between teachers and students will be made automatically for each second of classes borrowed.

As stated above, everyone who wants to use the YellowBetter platform will have to purchase the token and will be able to do so through BetterPay and its currency exchange option.

To invest in this project they are accepting payments in euros, dollars and more than 80 crypto coins. Accepted crypto currencies include ETH, BTC, LSK, XRP, NEO and ETC. You have a minimum investment of 50 euros.

The company behind this ICO is Crypto Invest Polska LTD, a company registered in the United Kingdom. It has a team made up of 8 developers and 5 advisors.

Among the members to highlight we can see the co-founder Damian Guzik, an economist and entrepreneur who has been in the business world for over 10 years. He is also involved in the world of real estate investment.

Another co-founding member is Pawel Juraszek, who is in charge of the finances within YellowBetter and BetterPay. He has been very involved with Blockchain technology within his native Poland.

Consultants include Morten Christensen, an ICO subject matter expert who has worked with more than 30 projects around the world. He also knows about the language issue that YellowBetter is raising.

Do they own a Minimally Viable Product (MVP)? No, we couldn’t identify an MVP within their web space.

The learning of languages is a task that has spread in all countries of the world, be it countries with greater development or developing countries, in all of them it can be observed as the language industry has spread.

The idea that YellowBetter sells is focused on taking to all parts of the world, overcoming the cultural and idiomatic barriers that separate people. Guaranteeing globalization within a project of this type is positive because it in turn makes the currency be adopted by different communities scattered around the world, which obviously infers in the massive adoption of the token.

BetterPay will function as a payment processor that is intended to be used within various tourism-related web portals. This processor will work with the YBT token, thus giving the currency a use within a commercial sector as important as tourism.

Despite the fact that we still do not know in depth how BetterPay will work or what portals it will acquire, we believe that these types of processors help a lot in the adoption of the currency and its consequent valuation.

Very focused team in a region

A large part of the members of this ICO are Polish and have their main business centre in Poland. The problem that this generates is that the project can be very focused or developed in a single region and this is not recommended for an ICO and much less for a project like this that points to a fully globalized market.

It is possible that this situation will be countered with advertising and marketing plans, the link that will receive the most money of the total collected in the ICO. However, we still do not know what the advertising planning will be like or where it will be oriented.