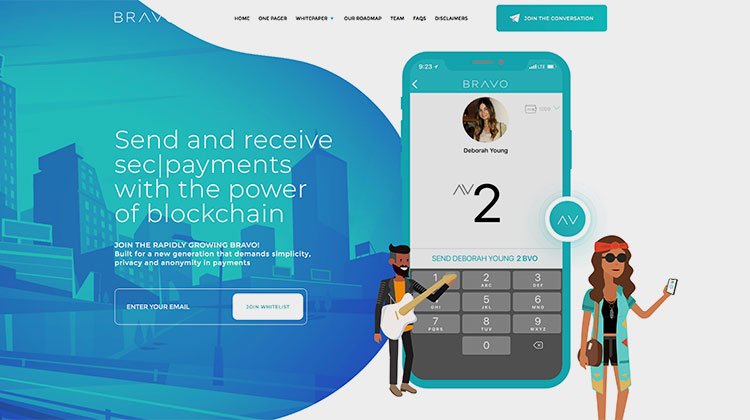 Faced with the need for a generation that demands simplicity and control of privacy, the idea was born to create a mobile payment system with cutting-edge technology that allows payments to be made with a high level of privacy. The trial application is currently available in several U.S. cities and is already providing some financial power to tens of thousands of service professionals, artists and small businesses. In this way the ICO of BRAVO Pay is born, a platform that already works in the United States and that now wants to expand worldwide. BRAVO wants to overcome the slow adoption of Blockchain technology by creating a system that is simple to use and focused on the person, all through a stronger Blockchain infrastructure.

What is BRAVO Pay ICO?

The objective of the developers is to create an ideal platform, and they define it as a space where users can register and create an account quickly, transactions should be able to be executed without using private / public keys that are long and complicated, this thanks to the implementation of a PIN access code that makes easier to use and manage it, all this while keeping payments secure, private and anonymous, without the risk of hacker attacks, as it is intended to maintain the level of encryption without the user losing access and ownership of their tokens.

Another important aspect of BRAVO is that there is no need for public or private keys and that there is a very efficient password recovery protocol to ensure full control and access to the tokens that are kept in the personal purse. In addition, the system is kept completely private and incognito thanks to the development of the protocol Incognito Payments, a system developed exclusively by BRAVO Pay. Along with the payments you can send an optional private message that will only see the person who receives the money because the application has an integrated messaging system.

Bravo Pay is soon reaching its milestone of having our system fully integrated to Blockchain for cryptocurrency payments. Please see our Explainer Video as to why you should join our movement! Thanks for the constant BVO love and support as the community continuously grows. Feel free to share our content and engage as we keeping working towards the global expansion.The TGE is open to Non-U.S. persons only and other restrictions apply – See details in disclaimers section of bvo.trybravo.com

Use of Blockchain in BRAVO Pay

First of all, we must point out the BRAVO Blockchain Consortium system, the system that will maintain and validate users’ operations. This Consortium will be made up of specially selected merchants who are part of the BRAVO Pay community. These members will lend their computing power to maintain the infrastructure of the BRAVO system and will be rewarded for this.

These members will also be responsible for validating and processing the transactions, but, unlike traditional Blockchain networks, the transactions will not be validated by each of the members, but will only be verified by a single trusted member of the BRAVO Pay Consortium. Developers claim that this system prevents transactions from consuming a large amount of resources and time, as is the case with the current system. Regarding the security of this system, it is stated that it is reliable because each member of the Consortium is a member of BRAVO that has an interest in maintaining the network.

The fact that BRAVO’s Blockchain network is hybrid means that it works with both public and private elements. The public elements are made up of the consensus algorithm of the federated Byzantine Agreement, while the private element can be seen in the anonymous participation test algorithm.

The consensus algorithm of the Federated Byzantine Agreement seeks to maintain fast and efficient consensus within the network. Members of the Agreement must be selected and approved by all members who are part of the network. In this Federated Byzantine Agreement each node establishes its quorum segment. The agreement in the system is reached when the quorum segments report all the transactions they have supported.

We also mentioned earlier that BRAVO Pay would have an incognito payment, a format designed for those who require privacy. This system will be achieved with the use of BRAVO private tokens (called BVO-P) together with a privacy algorithm. To do this, first the person interested in paying anonymously must exchange their BVO tokens for BVO-P tokens, then makes the transaction anonymously to the person who will receive the payment and automatically, those BVO-P tokens received become BVO. It should be noted that these transactions require more computing power to perform and therefore will be more expensive to perform.

Use of the BVO token within the process

The BVO-ERC token will be the token to be given to ICO investors. All buyers will be offered an Intelligent Contract that will run on the Ethereum network. Once the ICO is over, BRAVO will offer BVO-ERC token holders to exchange their tokens for BVO tokens. All BVO-ERC tokens that are exchanged will be immediately destroyed.

The BVO tokens are those that will be used mainly within the platform and that are intended to be used as a form of mass payment. The BVO Token can be exchanged at Exchanges and subsequently, the developers state that within the BRAVO platform, BVO tokens can also be exchanged for other crypto currencies and Fiat coins.

The price of each token at the public sale has been set at 10 US cents, however, between the different stages of the ICO will apply discounts and bonuses that will affect the final price of the token.

A total of one billion BVO tokens will be issued and 500 million will be earmarked for sale. The maximum monetary target that is expected to be collected is $34,700,000 and the minimum is $10 million. They are accepting ETH, BTC and FIAT currency as payment method for the acquisition of tokens.

BRAVO Pay is being carried out by Bravo, LLC. a company located in the United States and which has a team of 10 people.

The CEO of this project and co-founder is María Del Carmen Luna, an MBA with more than 22 years of experience in the business world. He has worked with companies such as Nabisco, AbbVie and Bristol Myers Squibb.

Another outstanding member is the CCO, Hector Rodriguez-Luna, a physician and researcher who has worked for many years with technology focused on the medical aspect. He relies on crypto currencies and has seen their potential for 4 years.

The project’s CTO will be Elmer Morales, a software creation expert who has worked with such large companies as Microsoft, Accenture and American Express. He will be in charge of carrying out all the work related to BRAVO’s Blockchain technology.

Among the advisors in this project we will meet Dean Cannell, the founder of CoinFabric.com, a company that is responsible for advising companies that implement Blockchain technology and seek to organize ICO´s.

Do they own a Minimally Viable Product (MVP)? Yes, the BRAVO Pay application is already working since 2015 in the United States and has processed millions of dollars within this market. The app is on iOS and Android.

As the developers themselves mention, few ICOs in today’s market have such a functional MVP as BRAVO Pay and in this case we have a project that has already been working correctly with the FIAT platform.  Beyond the ease of project development that this implies, it is also very useful to ensure an optimal level of adoption. In the particular case of BRAVO, a project that is already widely adopted, one might think that the BVO token will have a large number of users from the outset.

These solutions have a very good appearance and could be applied to solve the problems of scalability and payment of the fee, implying a very positive change for the crypto currencies in general, beginning to benefit in the first place BRAVO Pay.

Contras of the ICO BRAVO PAY

Bravo Pay is proposing a totally innovative solution, which is positive but also risky. The presentation of the Blockchain hybrid and the application of the consensus protocol are still in theory and when applied to reality are very likely to present drawbacks that had not previously been taken into account. This situation is very commonly seen within the projects that propose new technological solutions and it should not be ruled out that it may also happen with this project.