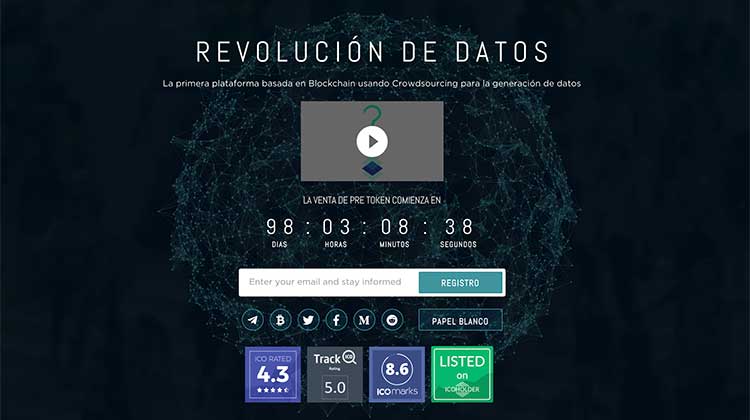 With the objective of placing people at the center of the data ecosystem, the Dataeum project proposes the creation of a platform based on Blockchain that will use the homologation of resources to achieve a collection of 100% of all the existing physical data in the world and with a more precise accuracy than the one currently available. To achieve the collection they will use people who will be called «collectors» and their work will be rewarded with XDT tokens, the currency of this project.

The developers want to use the system of homologation of resources to achieve the creation of a collaborative and decentralized platform in relation to data generation. All this process will be created without the intervention of intermediaries thanks to the application with Blockchain technology and it will be looked for that the data move in a free and safe way between the collectors and the people who acquire the data. Dataeum will enter the equation only to create a space where reliable and secure data can be obtained.

Data collectors are a fundamental part of this process and for the generation and collection of data 2 steps will be done. The first step will be the one carried out by data collector 1 through data entry and then 2 or more collectors will act as data verifiers to ensure that the information provided by data collector 1 is correct. Each data collector will have a score that will determine the quality of the data collected. This quality score will increase as other collectors verify the accuracy of the recorded data.

All information collected must have at least one image linked to the data. In order to achieve greater accuracy, the data will be periodically updated by means of an algorithm that will lead the collectors to keep the data as up-to-date as possible. All this information will be kept in the Blockchain Network in order to keep the information safe and unalterable.

Each data that has already been collected and validated by the collectors will be available for purchase in a virtual market that will operate fully decentralized. This market can only be accessed with the project token and will be useful for those who need to make market studies, analysis, price query and any type of research that requires the information obtained in the Dataeum platform.

The data collection will be done through a mobile application that in fact has already been tested in Barcelona, Paris and London, spaces where more than 300,000 data were collected correctly. In addition to Blockchain technology, Dataeum implements Artificial Intelligence and Augmented Reality to make the data recognition and analysis process automatic and instantaneous, thus making the data collection process much faster.

Use of Blockchain in DATAEUM

As mentioned above, the developers of DATAEUM have raised the use of Blockchain technology to eliminate the need to use intermediaries and connect data collectors directly with people who are interested in acquiring that information. As stated in the Whitepaper and on the project page, this connection will be made through the Intelligent Contracts of the Blockchain network.

In addition to the relationship between collectors and interested parties, the developers have proposed the use of Blockchain technology for data storage, because they consider that this way they guarantee the inalterability, transparency and traceability of the data. In the Whitepaper we are told that they will use the data storage technology being implemented by BigchainD and IPFS, companies that are developing a form of data storage and multimedia files within the Blockchain network.

BigchainDB is one of the most innovative solutions in the data backup market today. This technology is already working and according to what we have been able to see it offers the best service of the world in the traditional handling of data next to the world of Blockchain, achieving that traditional flexibility coexists together with the immutability of the Chain of Blocks. In addition, BigchainDB is a system that works very fast and can support up to 1 million scripts per second and has a capacity of 1000 terabytes that can continue to increase over time.

On the IPFS side we could see that it is a peer-to-peer system that allows to store multimedia in a decentralized way in each node that exists within the network. With this format they generate that the information network is infallible and cannot be modified without the authorization of all the members.

It must be added that developers are also not closed to using other tools in the future to meet the objectives of the project in a more specialized way. They will report back later on the changes they make.

The Dataeum Token (XDT) is intended to be the foundation for commercial exchange within the Dataeum network and platform. The following services can be paid for with the token:

Regarding Data Ownership Exploitation, developers explain that it will be possible to acquire ownership of physical data exploitation. Acquiring this will allow the acquirer to be rewarded based on all the income generated by the exploitation of those data.

The acquisition of these DOE must be done directly by the platform and its value will be established by the platform. Each DOE acquired will be automatically available to rent within the market and the rental price will vary depending on the market demand or not such data. The holder of the DOE also has the right to resell them to other interested parties. In order to guarantee the remuneration to the DOE holders, intelligent contracts will be implemented which will monitor all the elements.

The company behind the project is DenDen, a company founded by Charly and Billy Pham, the founders of this project as well. The company is located in Estonia.

Charly Pham is the CEO of the project and is a man with experience in the world of investment and project creation. He was one of the most important members in the creation of the project’s mobile application.

The CCO is Billy Pham, an enthusiast of the crypto-money market who also has experience within the business world.

Alain Rabahi will be the CTO of the project and is a man who will bring his experience as an entrepreneur in other starups to ensure that Dataeum has all the technical elements at the highest level.

Among the advisors we will meet Simon Cocking, one of the highest level advisors in the world of ICO and one of the most influential people in Fintech.

Do they own a Minimally Viable Product (MVP)? Yes, the application is already in Alpha version and has been used in Barcelona, Paris and London. You can see the test results at forbiddencity.io.

The directors and managers of this project have academic preparation and work experience linked to the world of technology, having already many experiences in the control of large companies. This condition can help the correct development of the project and the growth of the company, a very important aspect for the valuation of the token.

Dataeum was already tested in Barcelona, London and Paris and managed to collect a large amount of data, demonstrating that the project can have large-scale functionality. The fact that it has been tested in 3 of the world’s largest cities also allows us to see that this is a project that can support large amounts of data without complications.

According to the Roadmap, the project will be completed by the end of 2021, thus becoming a long-term project. This situation also affects the valuation of the asset since it generates that its revaluation is made in a term of 3-4 years, a long term within the world of the cryptomonedas and the ICO of today. For many investors this is not a problem but for those who want to see a quick return on investment, it is a complicated situation.

Other ICOs and Blockchain projects have already proposed something similar and have not been able to start. Elements such as competition, scalability problems and other technical problems that do not allow at the end a complete development of the project. Dataeum will have to go ahead and demonstrate why it is different from the rest of the projects that have been presented on the net in order to find a space within the market.