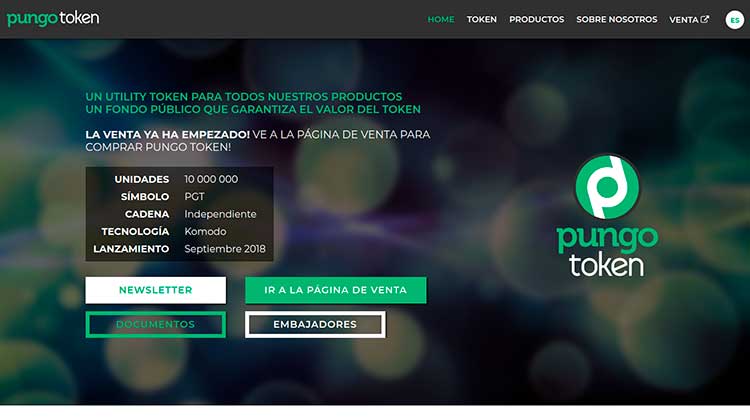 Pungo Token is presenting us a multi-jurisdictional escrow exchange service with incentives to motivate the correct performance of operations within the platform. This platform is called “Peer2Cash” and according to what is explained in the official project document, this Exchange is different from centralized, decentralized and centralized custody models, it is a platform that will work with light Custody.

What is Pungo Token ICO?

The team has decided to work in this way, Peer2Cash in order to have a series of features of its own that, according to the promoters, will lead the project to success. The first characteristic that they present is that of distributed liquidity, for which it is ensured that the platform will be supported by a geographically distributed participation, thus ensuring that there are several options to exchange FIAT for crypts within the platform.

Another important element is the integration of the platform API with any page that needs an integrated payment gangway. It is ensured that this element is very important so that businesses and websites can receive all types of payments without major problems and without the need for advanced programming.

We must remember that in Peer2Cash they have a system called Light Custody and with this system they ensure that they have a more secure system against hacking compared to centralized platforms. According to the above, centralized Exchanges have the risk that funds sent to their accounts are misused or even stolen. In contrast to this system, Peer2Cash is proposing a system in which the platform only retains 5% of the funds as a guarantee deposit, thus seeking to discourage the actions of hackers.

In addition to Peer2Cash, it is working on other services such as Pungo Wallet, the Virtual Wallet of this token. This Wallet is already developed and can be downloaded for phones with the Android system. As explained on the website, the Wallet will also have the capacity to support all Electrum coins.

They also offer Peer2Krd, a prepaid debit card that can be topped up with BTC, KOMODO and SMART. The card is already working and will first be sent to investors located within the European Union. The card is completely free and users only have to pay for shipping.

Finally, together with all these services that are already in operation, also raise the Peer2Trade service, a platform that secure in the official document will serve for professional traders of crypto currencies. They estimate that they will have more than 25 currencies to trade and that the site will be up and running in the last quarter of 2018.

The Blockchain technology used in this project is that of Komodo, a Zcash fork. As is well known, Zcash uses the Zerocash protocol, a system that is designed to offer greater privacy and anonymity in transactions.

On the part of Komodo’s Blockchain, it has the same elements as the Zcash network but this offers an extra element to solve the scalability problems in Blockchain networks. Komodo’s network can run on as many Blockchain networks as needed according to the market, making infinite operations without problems. Komodo is also working on “Atomic-Swap” technology, a technology that seeks the transfer of crypto coins from different Blockchain networks without the need for a third party to intervene.

Pungo uses Komodo dPoW, a system that uses the Bitcoin network to protect itself. Komodo backs up its own Blockchain network to store as a transaction within the Bitcoin ledger, this backup is done every 10 minutes. The Pungo network will function in a similar way to Komodo.

Being inside Komodo’s Blockchain network, Pungo’s token will be able to work inside the decentralized Barterdex and Hyperdex Exchange as well as be able to use Atomic-Swap technology. These features are intended to ensure that the token has access to the coin exchange market.

This project will implement the so-called Pungo Token, a native currency that will be implemented within the services offered in Peer2Group. The developers of the project state that the token possession will grant certain rights and benefits as well as have its utilities.

The project whitepaper states that token holders will have advance access to the unlocking features of products launched by Peer2Group, as well as better rates on the Fiat Gateway using PGT. PGT holders will be able to make commission payments and affiliations to PGT partners and collaborators. In addition, coins will be created so that PGT holders can vote about certain topics.

An important element to highlight within the theme of the project tokens is the Public Buyback Fund, a system that, according to the project sponsors, will ensure liquidity and maintain the prices of the Pungo Token. This Public Fund will be open to any user with more than 1000 dollars in Pungo Tokens to enter a request for sale within the Fund and thereby manage to sell their tokens to the company that holds the token. The Public Repurchase Fund will obtain its funds to make operations through 0.2% of the income obtained in Peer2cash and 0.2% of the income obtained from Peer2Krd.

The price that the Public Repurchase Fund will have to buy the tokens will not be the one that marks the market inside the Exchanges, they will have their own formula that involves the amount of money that the Public Repurchase Fund manages and the amount of tokens that exist in circulation. The tokens purchased by the Public Buyback Fund will be burned and rendered unusable, thus seeking to reduce the supply of tokens in the market and thereby seek to keep the prices of the token rising.

For this Project, 10 million tokens have been proposed and it has been established that 70% of them, 7 million tokens, will be sold. The initial price of the token will be 50 US cents (0.5 USD) each, although, depending on the date of purchase, discounts and benefits that impact the price will be available. How payment method is accepting Komodo, BTC, SmartCash and Euro and the minimum amount to participate in the purchase as an investor is $500.

The other two companies within the structure of Pungo Token is Unlimited Web Services LTD, a company registered in Gibraltar which is the holding company’s main company and which will be responsible for providing software services to the project.

The last company in the group is Datasoftlayer Services SRL, a Romanian company that will buy and sell crypto coins for the company. We do not know what other functions it will have within the holding nor do we know in what way this buying and selling process will influence.

Do you own a Minimally Viable Product (MVP)? Yes, they already have Pungo Wallet, the Peer2Cash platform and the Peer2Krd rechargeable debit card.

The Roadmap is separated according to the service being offered, specifically for Peer2Trade we are told that it will be ready for the first month of 2019 and will have a mobile application, an affiliation program and a Blockchain project incubator.

Regarding the progress and development of Peer2Cash notify that by the last quarter of 2018 will be linked to Pungo Wallet and will support more than 25 crypto currencies. For the first semester of 2019 the API and the Widget will be ready to work in web pages.

With the Peer2Krd they explain that the goal for 2018 is to reach the 1000 cards distributed among users and owners of Pungo Tokens. For the first semester of 2019 they expect to have the license to offer the payment processing service.

Since LocalBitcoins was founded, more than 60 billion has been marketed through that one platform and LocalBitcoins is not the only one that exists, there are many other Fiat-Criptomedas Exchanges that are working in the market. These amounts let us see that we are facing a market with a proven profitability and a real importance within the market.

Peer2Cash’s proposal could be successfully taken into the market and with this success keep an important part of the market that is already moving today. The incentive plan can make the platform fast and dynamic, something that very few platforms offer today and thus can reach a space in the market.

The burning of coins is something that not many crypto coins do but it certainly has a very positive impact on the future valuation of the token. Decreasing the supply of tokens as the demand for the currency increases due to the natural development of the project is an issue that as a logical result generates an increase in the price of the token.

The positive thing about Pungo Token’s coin burning program is that they will make the process by means of a repurchase system of amounts higher than 1000 dollars, implying that they will burn large amounts of coin and that it will also lead investors who want to sell their coins to acquire a large amount of it, thus ensuring a constant movement of the market.

Cons of the ICO Pungo Token

As we have mentioned in previous projects, not even the best product in the world can be sold without a sales or advertising plan behind it and that is why we have always considered that a marketing plan in an ICO is indispensable.

In Pungo Token it is necessary a more elaborated one, although the companies that form the group have tools to carry it out, they are not using them completely, although to do so we could see a strengthening of the ICO.