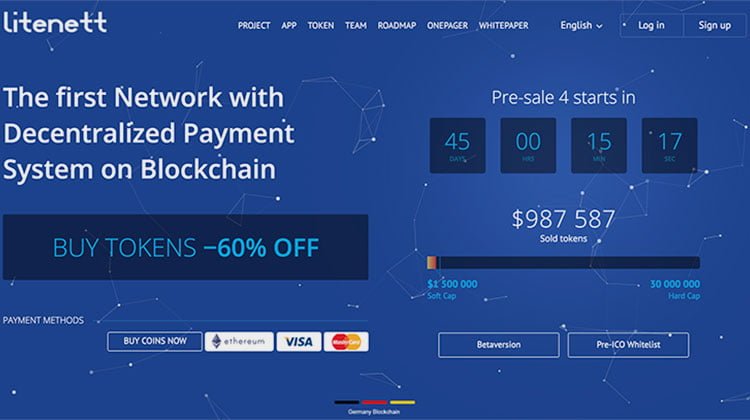 The ICO of Litenett proposes the creation of a social network integrated with a payment system, all supported with Blockchain technology.  The social network that they propose to create in Litenett is presented as a «different» option because it will include all the services in the same place, that is, users will be able to chat, write, share music, videos, radio stations, events and also send and receive payments in a single platform.

So how does Litenett differ from other existing social networks?

As established by the developers themselves in the Whitepaper, to give an attractive differentiator to the project have determined that they will give rewards to active users within the platform and for the display of advertising, specifically have planned to deliver 30% of the funds they receive as payment by advertising companies. Although until here it seems a simple «PTC» (pay to click). Litenett explains that what they are looking for with this technique is to extend the accessibility of crypto coins, a meeting place for content sellers and consumers with a consequent remuneration. In this way, thousands of users from all over the world can enter your network.

Having a large number of active users on the social network creates an incentive for international brands that want to advertise to large numbers of people and in turn can also make payments through the same platform.

All these payments will be made by means of Blockchain technology in order to guarantee the realization of safe, economic and fast transactions. This payment system will be positive for both companies and users since they will not have to pay commissions or fees for the use of online payment platforms such as Paypal or Payoneer.  Actions such as buying tickets for a show, acquiring music albums, films or episodes of TV series can be performed on the Litenett platform.

Use of Blockchain in Litenett

With the use of Blockchain technology in Litenett’s platform, the aim is to improve the traditional payment system on the Internet in order to obtain a faster and more efficient one.

In the words of the developers themselves, using Blockchain and crypto currencies in a social network like the one planned here, they want anyone to be able to use virtual currencies without problems. Terms such as virtual purse, public key, tokens and other terms specific to crypto coins can begin to be used more commonly among people totally outside this market.

It should be noted that the use of Intelligent Contracts to ensure payment to users for the display of advertising is not announced, nor is the use of Blockchain for the safeguarding of user information determined. They have only limited themselves to applying this technology to the issue of payments within the platform.

Use of the LitenettCoin token within the process

With their LinettCoin, users will be able to purchase services and products within the platform itself as well as exchange virtual currency for fiduciary currency such as dollars or euros.

In Litenett have separated the ICO in 6 rounds, each with its different prices. At this point, sales round number 3 has just concluded and on August 27th sales round number 4 will begin so that it ends on September 2nd. In this round the token will be worth 45 cents each.

The minimum amount they expect to raise is $1.5 million, while the maximum amount is $30 million. As a payment method, developers are accepting ETH, dollars and euros, the latter two can be paid using credit card.

The Litenett project is carried out on German territory and is owned by Alex Capital GmbH. Within the development team we are going to find a small group that is mostly occupied by technicians and engineers with expertise in the area of computing and programming. Among the members we can mention is his advisor on Blockchain, Aleksandr Onikienko, very recognized within the topic of cryptomedas and specifically within the world of the ICO.

We also have its CEO Alexej Karpov, who is also the president of Alex Capital GmbH and has the technical experience to know in depth the reason for his project since he is a highly qualified engineer with experience in the subject of copyright in the web world, a very important element to take into account in this project.

Do they own a Minimally Viable Product (MVP)? Yes, they have a portal that’s in beta. It’s totally in German and so far only in that language.

Many of the elements of the Litenett roadmap mark the start of specific work for the project. Unfortunately, much of this data cannot be verified as it is internal company information.

However, milestones that are open to be shown to the public if they have been met and have shown that the company is going at the expected pace.

The market that Litenett is targeting for social networks is getting bigger and bigger, just look at the numbers on Twitter and Facebook to see the continued growth that these social networks are having within the world.

Litenett wants to break into this market by offering many more things than are currently offered such as music, video, series and paid content, all in one place. If all this union is given, it would have a final product quite attractive for the community in general.

The sale of services over the Internet is highly profitable

About 10 years ago people had a hard time giving their money to buy digital products over the internet. Payment applications, music, series and other virtual material were not as sold as their physical counterpart. However, this is a thing of the past because today virtual commerce moves a lot of money, in some cases even opaque the sale of physical objects.

If Litenett manages to capitalize and bring those sales for services and virtual goods within its platform, the profits it could make would be really significant and also, how these operations would be performed with the LitenettCoin token, there would be a circulation of the asset important for its revaluation.

Cons of the ICO Litenett

Serious contradictions regarding the use of LitenettCoin

The use of the LitenettCoin token is not entirely clear and the project’s own website contradicts itself in such a way that it calls into question the usefulness of the token. At the beginning of the page, where they establish the use of the Token, they clarify that services can only be bought and acquired with the use of LitenettCoin, however, they further clarify that there is also the possibility of using DolarCoin and EuroCoin, a currency that users will be able to acquire with their credit cards.

This particular element and the little explanation they provide generates much mistrust about the usefulness of the token and the future it may have as a cryptomoneda.

First of all, the team of developers carrying out this project is mostly located in Germany. This would not be a problem if they only focused on the German market, but this is not the case, this company wants to internationalize and does not have international sales teams or people who make the necessary connections to reach other markets.

Secondly, much of the team that makes up the project has little or no connection with the world Blockchain. This disconnection can be appreciated in the project due to the low use of Blockchain technology, since they only limited its application for payments.

LitenettCoin has to compete with well-established companies in the market such as Twitter, Facebook, Youtube and even in the world of crypto currencies would have to compete against Steemit. The existence of competition would not be a problem if Litenett offers something different to the social networks mentioned above, but the problem is that it does not prove it. Neither in their web page nor in their White Paper do they show differentiating elements that make them better than the already existing options.

Litenett has been operating in Germany for years now and their test platform has already been able to include films, music, radio stations and a lot of information from the German media, but they cannot do the same in every country in the world.

Copyright laws are very varied and if Litenett wants to expand around the globe, he will need legal advisors to help them adapt to the different rules governing this issue. According to what we see in his White Paper, Litenett has not considered this possibility.