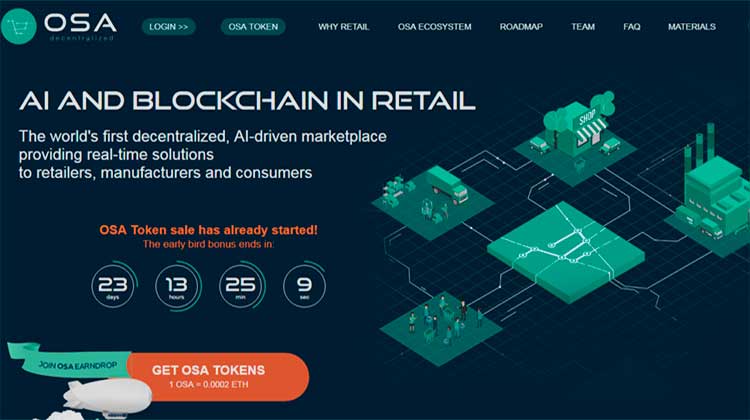 OSA Decentralized is a company that has already been working very hard in the world of technology as well as in the business world of consumption. This company pretends, with a hybrid platform patented by themselves and that mixes Artificial Intelligence with Blockchain technology, to give a solution for the retail industry that has problems both with the supply of their inventories and with the overproduction of the same.

Since OSA DC consider that the current system of maintenance of supplies in retail stores is inefficient and ends up generating failures in the availability of products within the shelves. Faced with this problem, the company corrects the situation with the use of new technologies.

At the same time, with the analysis of inventories and products, OSA DC proposes to offer end consumers recommendations that will lead them to make the best purchasing decisions. At present we do not know what kind of information it could provide to consumers but understanding that all information handled by OSA will be treated in a Big Data with Artificial Intelligence we could assume that the platform will recommend better prices, fresh products, better quality and many other data that the platform identifies as important to consumers.

The OSA platform will also allow producing companies to have greater knowledge about the supply chains that carry their products. With the proposed technology, companies will be able to detail the entire path of the product from the moment it leaves the production stations and lands in the hands of the customers.

Use of Blockchain in OSA

To determine the use of Blockchain in this project we will see the own words that Alex Isaeiv, CEO of the developer, has said about his project and is that according to him, OSA is «a decentralized market for IA solutions for consumers, retailers and manufacturers».

The Blockchain is what unites the entire ecosystem that supports the environment, both suppliers, consumers, logistics companies and retailers. Having all the data in a Blockchain system ensures that it remains incorruptible for analysis by the producing companies. Among the data that are kept secure are the supply information from retail stores, the evaluation of products made by consumers and any other relevant data that the Artificial Intelligence system may consider important to the company.

Likewise, the OSA system applies the technology of Smart Contracts for the granting of rewards that correspond to consumers. This ensures that the granting of tokens will be for the performance of certain activities required by the platform.

Using the OSA token within the process

The use of the token in this project is different from how it is conceived in most of the projects of Criptomonedas e ICO´s. At OSA, people will not pay to purchase the token, but the platform will «pay» consumers with the token for using the platform.

What can people do with the OSA token given to them? According to the developers, consumers will be able to use OSA coins to purchase products at retail partner stores. If we look at it this way, the OSA token is not an investment in itself but rather a useful token since it will have a specific function within the platform and in the business world.

Reading the project we could see that currently the contributors of the project have already donated 4,200,000 dollars for the start of the project as well, the platform, which is already with some active functions, has received more than 1 million dollars for providing its services to businesses.

As an objective for the ICO’s collection, OSA has proposed to reach 40 million dollars. The current value of the token is 5000 OSA per 1 ETH, which would otherwise be 1 OSA equal to 0.0002 ETH. The minimum investment amount is 1 ETH and accepts ETH, BTC, LTC, BCH, ETC as payment, demonstrating a wide variety of payment methods.

The team behind OSA

OSA is based in Estonia and has a development team of 35 people. Among its outstanding members we can observe the aforementioned, Alex Isaiev, who is the CEO of the company and has extensive experience in everything related to the retail industry.

However, the most remarkable thing about this project are the advisors it has. First up is Don Swann, Vice President of the Walmart network of stores with more than 50 years in the industry. We can also observe Paolo Tasca, an expert in Blockchain technology who also acts as an advisor to the European Union and the United Nations regarding the operation of this technology.

Pros of the ICO OSA

OSA already has experience in the sector

OSA is not a new and inexperienced company as it has been working since 2016 as a platform and in those two years has provided its services to large international companies such as Coca-Cola, Pepsi Cola, L´Oreal and Danone. These companies have used OSA’s services for the analysis and collection of consumer data and have obtained, according to the developers, good results. If these relationships are maintained, OSA could continue to grow as a project and generate more revenue and impact for the token.

Strong and experienced team and advisors

Today we can find very few ICOs that can have a team of developers and consultants as well trained as the one offered by OSA. Its developers have sought to have the best experts at their side to focus all possible edges that can be had in this project, which is undoubtedly something extremely positive for the development and momentum of this project.

It is an ICO with international recognition and awards

Cons of the ICO OSA

The use of the Token is not very clear

In order to begin with this disadvantage it is necessary to determine which is the commercial object of this project. In the first place we can see that it does not have a single commercial object but that it tries to cover several elements. On the one hand we see that they seek to offer companies a service to efficiently control everything related to the supply of inventories, for this service they will charge the companies.

On the other hand, it can be observed that they offer consumers a service that «helps them to buy more efficiently and with greater knowledge of the products they are buying». By offering this service, the company will not charge but will pay consumers, but why will it pay them? What profit does OSA obtain in paying consumers?

Given these concerns, what we can observe is that, through the use of the platform, the company will «buy» data from consumers. Consumption habits, preferences, criticisms, spending capacity by zones and a large amount of information that is very interesting for companies and that can be obtained with the use of the OSA platform.

Consumers will «sell» their data for OSA tokens but the problem is that we don’t know for sure what can be done with this virtual currency. The developers have not announced that the currency will be interchangeable in an Exchange nor do they seem very interested in announcing it, the only utility they have announced is that the currency will be accepted as a method of payment in different retail stores, but we do not know which would be.

The marketing data of the companies are very delicate

The marketing managers of large companies protect their data and sales information with great suspicion and it is logical because if that information is exposed, the competition could exploit all its weaknesses. To get an idea of this problem, let’s imagine that Coca-Cola discovers which part of the city sells the least Pepsi-Cola and also knows why, would Pepsi-Cola be at a disadvantage compared to Coca-Cola? We think so.

In a similar way it happens with this project because, in spite of the Blockchain technology that supports the chain so that nobody adulterates or hacks the data, all the information reaches only one company, which for our particular case is OSA Decentralized. So, will large companies be willing to provide all of their supply information to a single company? That question is quite complex to believe.