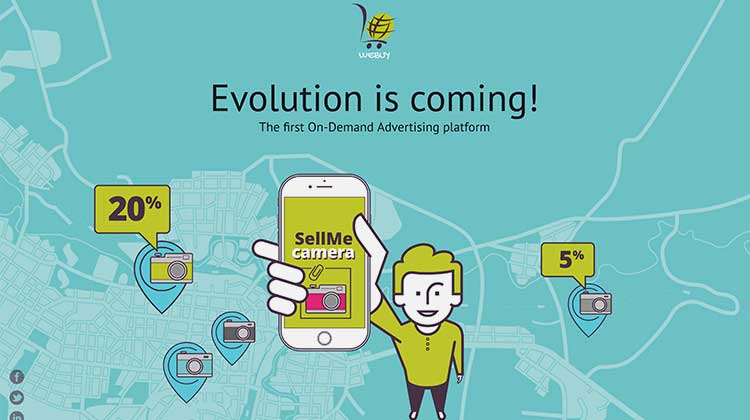 WeBuy wants to reinvent the relationship between buyers and sellers through Blockchain technology. Their vision is to build the first e-commerce site really thought for buyers. How do they affirm this? At WeBuy the buyer has a number of tools that will enhance the shopping experience.

What is WeBuy ICO?

The WeBuy team brings an ICO with a series of innovative changes when it is come to buy. First and foremost within your platform, the buyer is the one who will invite the seller to join the platform. In the assumption that the seller accepts the invitation to join and advertise on the platform, the suggester buyer would receive a commission.
With regard to advertising, there is also another interesting element. Advertising won’t work the way it does today. This project proposes a change by means of the format “SellMe”, this option implies that it is the buyer who requests that a product or a service be sold to him according to his needs. This “SellMe” notice would be sent to sellers who are nearby and who offer what the buyer is looking for.

Users can also see advertisements from other advertisers generating revenue just for seeing them. Before advertising is sent to the user, the user must decide that they want to receive it, thus ensuring that they will not receive unwanted advertising. All the advertising sent to users is specially designed according to their tastes and needs, being this favorable for companies since it ensures that all information is directed to potential customers. In the same way it contributes to the fact that the consumer receives only information of his interest.

The platform also benefits the sellers who subscribe to it. Upon registration, the platform gives sellers a $500 WeBuy token bonus that they can use to advertise within the platform. This is done with the intention that the sellers themselves see how it works and perceive the effectiveness that advertising can have on WeBuy.

The developers say that WeBuy’s geolocation tool is one of the most useful in the market and explain that this will allow sellers to directly target advertising to the right targets without the need for intermediaries (Facebook, Google, Amazon).

The developers have raised the project within Stellar’s Blockchain network and explain the reasons for this decision.

First they expose the fact that Stellar has its own decentralized Exchange that allows the free exchange of tokens that have been created within the Stellar network. This way it is not necessary to depend on any centralized and external Exchange to manage and convert your tokens.

Another important factor influencing the decision is the fact that transactions at Stellar are much cheaper than at the Ethereum network or any other Blockchain network. Besides that the Stellar network is also much faster. These elements have made Stellar the preferred Blockchain network for ICO projects that want to implement large amounts of micro payments.

In addition, developers will use Stellar’s smart contracts for the advertising display and referral merchant payment compensation system. This automates payments and ensures that they are executed at the exact time when the event occurs.

Finally, we were able to see in the Whitepaper of the project that within 2 to 3 years they expect the platform to become a DAO (Decentralized Autonomous Organization) that organizes itself and has codes that are self-executing. In this way the developers believe that the project will go beyond the current corporate structures and will become the preferred option for the future.

Use of the WBY token within the process

Developers have come up with a very clear utility within the WeBuy token platform (WBY). As explained in the project, the token will be used for 3 main elements:

The price of a WeBuy token at the ICO is anchored to the price of 1 Stellar token. 300 million tokens of the one billion tokens generated will be sold. Developers aim to raise a minimum of $5 million and a maximum of $25 million. The project is accepting both Fiat currency and crypto currencies as a form of payment but they have not yet specified what they are. The only thing we can assume is that they’ll accept Stellar.

WeBuy is based in the UK and has a team of 15 people and 6 advisers. Among the members we must mention is its CEO, Emil Guberman, a programmer with experience founding businesses in the United Kingdom, Israel, the United States, Russia and Kazakhstan.

The project CTO is Yuri Voschinsky, a software engineer who has worked for many years with data processing technology, Big Data and Virtual Clouds. He also worked for the Eyeona project.

Beni Issembert is one of the most experienced Blockchain technology experts in this group and has 15 years of experience carrying out projects related to technology and digital operations.

Among the advisors is Ismail Malik, the CEO of Blockchain Labs and an expert with high recognition and respect within the world of crypto coins. He is also the editor-in-chief of ICOcrowd.

Do they own a Minimally Viable Product (MVP)?  No, they have nothing to show the public.

The project aims to culminate in 2020, the year in which they expect the platform to become a DAO and remain in the hands of the user community. They aspire to have a first version of the platform in the third quarter of 2018 and for the first quarter of 2019 they propose what will be the internationalization of the project to other latitudes of the world.

The advertising business is very profitable

You only have to look at the huge sums of money that advertising moves around the world. Some of the sites such as Facebook, YouTube and Google generate large revenues from advertising. The amount of money that companies pay for advertising is somewhat abysmal and each year seems to be increasing, demonstrating that the advertising industry is still a good sector to invest in.

By giving sellers the ability to expose their advertising to buyers who have shown an interest in their products and who are also located in nearby geographic locations, it is a decisive factor that is likely to increase sales to potential customers. It is something that is designed to maximize trade through personalized advertising.

Cons of the WeBuy ICO

Starting an ICO on a specific Blockchain platform and setting as the initial price of the WBY the equivalent of an XML which is the main currency of the Stellar network is to start with too much ambition. Stellar is a Blockchain network that is already consolidated within the market and cannot be compared to an ICO that has not yet been launched into the market.

In addition to the above, by anchoring itself from its inception to the price of Stellar, it is possible that the price of the WeBuy token will depend to a large extent on the behaviour of Stellar’s price. This could be negative because the asset price is not directly dependent on the development of the project.

The world of advertising is widely dominated by companies such as major social networks that succeed today and have billions of users deployed around the world, breaking into this market will cost a great effort on the part of WeBuy. In addition, it must also compete against other big names like Amazon, eBay and all the big virtual stores, making the race even more complicated.

Today there are dozens of ICO´s and projects that are planning to give away tokens for reading, watching videos, studying or simply being part of a community. All these projects propose something that is not seen in normal economies: giving money away.

With the case of WeBuy we can see a project that proposes to give money to consumers to see advertising, something that already exists in the famous PTC pages of the Internet.

How do you convince a seller to market his services or products in exchange for a token that is given away just for seeing advertising?  It’s a somewhat complicated idea to sell and it probably won’t motivate many sellers to accept these tokens as a form of payment.