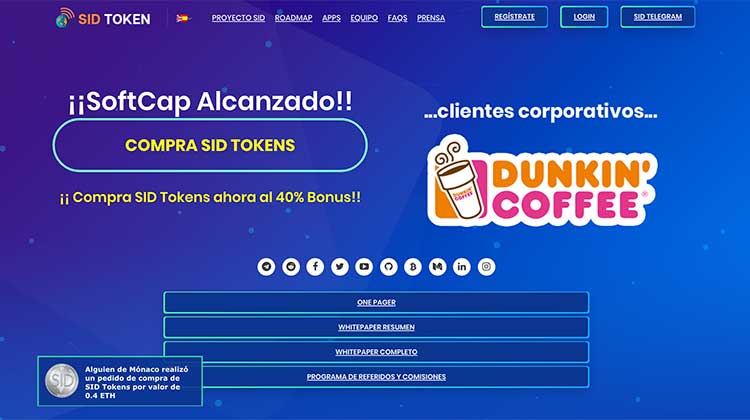 The SID team has informed us that the HardCap has been adjusted and lowered to 15,000,000 dollars.

We have heard from Facebook and Microsoft trying to offer free internet to everyone, complex satellite systems all over the world… Perhaps a Share Internet Data (SID) proposal can change the world in that way.

The ICO of the Share Internet Data (SID) platform, is a project that aims to share the Internet in a decentralized way among the members of the community. The objective of the project is to bring the Internet closer to people with fewer resources, giving them the possibility of accessing the Internet.

They already have an application for the public available in iOS and Android since February 2018. The application allows users to access the Internet through various sources such the phones of nearby SID users and WiFi points that are registered within the platform. This connection process is achieved without giving the private password of the WiFi networks since the key is introduced directly by the SID application, which keeps them encrypted in its platform in order to shield the access and give security to the network of the person who shares.

The developers explain that their project also has patents pending for approval but that they will be extremely useful in the project. They announce that their technology will allow to extend the radio range of the Wi-Fi access point through the automatic configuration of the application to use nearby smart phones that are connected to an Internet source (either WiFi or mobile data) as Internet servers in order to share that connection with other SID users who are not in the radio coverage of the WiFi access point, but are in the range of the Internet host of the phones registered in SID.

This technology will also improve indoor radio coverage when mobile data coverage is not sufficient within some facilities or a network is saturated by the number of people in one location, as well as optimize battery consumption of devices with SID.

Use of the Blockchain in SID

This project is based on Stellar’s Blockchain network and in principle they clarify that they use this technology to ensure the exchange of tokens per megabyte of shared internet. The developers explain that they have chosen this specific network because first Stellar can confirm up to 30,000 transactions per second, a significant difference from the 15-20 transactions that the Ethereum network can confirm in the same time frame.

Also, Stellar has its own DEX (Decentralized Exchange), which allows people to transfer Stellar between them without having to go through centralized Exchange. This is expected to apply to the transfer of SID tokens between users using the platform.

Finally, the developers claim that Stellar is the right platform because their token transfer fee is really low, just a penny. For the project this point is really important since they consider that the price per transaction will be 0.01 dollar / euro / pound sterling per consumption of 10 megabytes, the average amount they expect users to consume the platform. Understanding this, it is impossible to pay the commissions of networks like Bitcoin or Ethereum that are much more expensive.

In addition to specifying the use of Blockchain for transactions between users, the developers also explain that they will use this technology to safeguard the information of users of the platform. Within the data to be stored are the WiFi keys, the country of location, exact location, altitude, etc.. All these data will be fully encrypted and secure so that they are not misused by hackers.

Use of the SID token within the process

The tokens from this project will be used to pay for the megabytes obtained through the network. It is not yet known the exact price on what it will cost each megabyte consumed but from what can be seen in the Whitepaper, they are calculating a 0.01 dollar / euro / pound sterling for every 10 megabytes.

Users will be able to purchase tokens in two ways. The first is by exchanging the token for crypto coins in Exchanges or for Fiat money, which is the traditional method of acquiring a virtual currency. The second way is a little different, SID users will be able to receive token rewards for ad consumption, a new token mining system that they can then sell on the Exchange if they are not redeemed by Megabites. But how can they see ads if they don’t have internet? The developers explain that if there is no balance, the system will tell the user the nearest WiFi point so they can have Internet and see the ads. Once you have viewed the ads, you will have credit and can connect via the Internet from a mobile or a WiFi home.

Developers have created 25 billion pre-mined tokens and have earmarked 10.25 billion of these tokens for sale, 41% of the total. Each token has been valued at 1 euro cent and they hope to raise 80 million euros with this ICO.

As payment method are accepting BTC, BCH, BTG, LTC, ETH, XLM, Euro and dollar. In order to invest in this project, a minimum investment of 100 euros must be made, although if more than 499 euros is invested, there is an extra bonus for the investor.

SID Limited is the company behind the development of the project and is located in Gibraltar. It has a team of 17 developers and 9 advisors.

Its president is José Merino, an entrepreneur with experience in the telecommunications and telephony sector. He was vice president of Philips US operations and former founder of Sensei Ltd, a technology company that sold to Vtech Holding in Hong Kong.

Its CEO is Lajos Kiss, an experienced director with more than 25 years working for telephone companies such as Alcatel and Nokia, demonstrating knowledge in telephony design at the service of the client.

Marcin Zduniack will be the expert in Blockchain technology behind SID and has experience within the Blockchain sector as a Blockchain Software Developer, specifically specialized in the development of software for crypto currencies.

Among the group of consultants we will meet Nikolay Shkilev, a world-renowned expert within the world of Blockchain technology and with experience in developing technology projects.

Another important advisor to mention is Christian Solli Nyborg, a well-known entrepreneur in the telecommunications sector and owner of one of the most important fibre optic companies in Spain.

Do they own a Minimally Viable Product (MVP)?  Yes, you can now download the applications for both iOS and Android.

According to what we can observe from your Roadmap, this project will be completed by the end of 2021. By March 2019 they expect to have the wallet and the SID interface adapted to Blockchain technology. By May 2020 they hope to have their website and application adapted for use in countries with a high concentration of users, and by February 2021 they will implement the direct advertising system in those countries.

A group of experts has been formed both in Blockchain and in the world of telephony, which is the sector that is most commercially linked to this project. In addition, the managers have business experience, which is indispensable for the success and development of the project.

In addition to the above, this team also shows elements of internationalization through specific representatives for expansion of the project in different regions of the world. This feature is very important for assessing what the global impact of the project will be.

The project application exists for both iOS and Android, which indicates that there is prior work by the team before the launch of the ICO. In the same way, these applications have been very well received in the market, showing a lot of downloads and good comments from users.

Cons of the ICO SID

Very high quantity to be collected

80 million euros is a very high goal, even within the ICO world. And although the Soft Cap ($3,000,000) has already been completed by a single client (LDJ Capital) in the Roadmap still does not explain the milestones that will be developed in the project if the 80 million raised are not reached.

Both in the Whitepaper and on the website we are told on many occasions that we are dealing with a project that will «give away» internet for everyone, but users who want free internet previously will have to see ads and undermine those tokens.

Although, recently the developers have confirmed to us that with the initial download of the app they will give away 3GB of free consumption for each user who signs up.