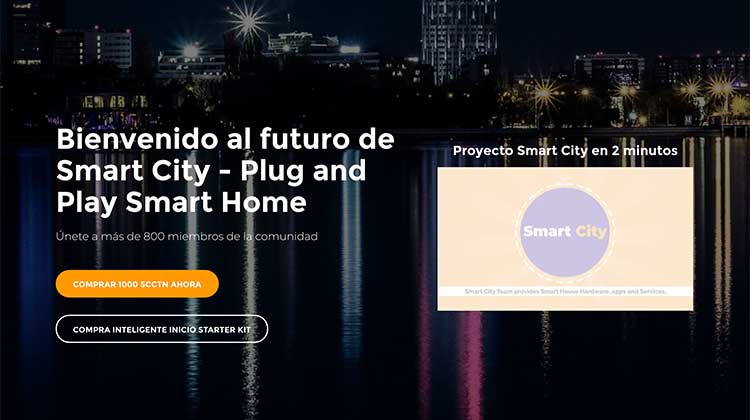 With the advancement of technology, the home has been changing as we know it. The application of technologies such as the Internet of Things, Artificial Intelligence, Machine Learning and Blockchain have ceased to see themselves as laboratory elements to begin to apply to aspects as everyday as our own homes and under this premise enters the ICO Smart City Coin Test Net.

What is the Smart City Coin Test Net ICO?

The developers of this project want to implement technology to enable people to better control and manage energy in their homes. An optimization will be given thanks to the fact that users will be able to obtain more specific data on the electricity consumption they are generating within their home.

The data obtained will be stored in a Blockchain network and analyzed by the “App4SmartCity”, an application that works by means of Artificial Intelligence and different algorithms to determine which are the patterns of energy consumption that are having inside of the home where the plugs being developed by Smart City are used.

With this data they intend to predict and control energy behaviour in order to achieve real energy efficiency, as the software will be programmed to provide solutions with the aim of eliminating excessive energy consumption.

In addition to offering a specific solution for each household that has the application integrated, Smart City will allow users to exchange their energy consumption data for SCCTN tokens, the currency being issued for this project. This information will be collected from the entire community of users that are within the platform, a community of 800 people that the developers expect to have 1 million members within 3-5 years.

In order for users to share their experiences, the developers propose the recording and broadcasting of videos while using the Smart City tools, which in turn will make them obtain tokens according to the number of visits and ratings that these videos have.

The developers mention that the project has a different vision from the rest of the ideas that arise in the energy saving market since Smart City will focus on the individuals that are part of the community and will prepare specific solutions for each of them. The ultimate goal they hope to achieve is for households to be able to produce the electricity they really need and thus achieve energy independence.

Use of Blockchain in Smart City Coin Test Net

In addition to using Blockchain technology for the creation of the tokens, the developers have mentioned the need to implement this technology to ensure “transparency, traceability and security” in the management of the data that will be collected in the home of each of the members.

Along with data storage, Smart Contracts will be used to regulate all relationships between the Smart City community and each of its members. The Intelligent Contract will be in charge of regulating the payments of the people who share their energy data with the platform, guaranteeing that everything is maintained in a decentralized manner and within an independent community.

Use of SCCTN token within the process

The token of this project is called SCCTN, a coin issued within Ethereum’s Blockchain network under the ERC-20 standard. This coin can be used inside the Smart City store, a space where you can purchase the project’s own utensils, batteries and solar panels, both new and used. As mentioned earlier, the acquisition of these tokens will be done through the sharing of information on energy consumption in the home.

The tokens can also be used as gifts between members of the community since it will be possible, like all crypto coins, to be transferred between users. In addition to transferring them, the platform will also offer the possibility to buy tokens from users for ETH, BTC, Euros and dollars, although this option will not be permanently open, it will be the developers who will notify when the token purchase is active.

For this project, a price of 1 euro cent per token has been established, with a minimum collection of 500,000 dollars and a maximum of 50 million dollars. They are accepting as payment method ETH, for 1 ETH a total of 10800 SCCTN tokens are being delivered. You can also buy tokens with euros in the Smart City shop, but only for the duration of the ICO, when it is over you will not be able to buy them in this way.

The team behind this project is located in the popular Crypto Valley, Canton Zug in Switzerland. It is made up of 4 developers and 5 Advisors.

Among the members we can highlight is CEO Peter Faleskini, an entrepreneur who has worked for more than 20 years on the issue of efficient electricity management and free procurement.

Kristl Ogris will serve as the company’s CIO and will be in charge of applying all his knowledge and experience in the field of Artificial Intelligence to apply all the algorithms and data that are expected to be collected within the platform.

Among the advisors we can find Richard Kastelein, a recognized expert in the field of ICOs and crypto currencies who has his own portal Blockchain News. He has already worked with more than 12 ICO´s successfully within the market.

Do they own a Minimally Viable Product (MVP)? Yes, the platform already has the Smart City store and also has 800 members within the community of users of the platform.

According to the Road Map that they are proposing, the project would be initially planned to be concluded in September 2019. In January 2019, the first 1000 App4SmartCity kits will be installed in homes.

Within the first 4 months of 2019 they expect the token to be listed in 2 of the world’s top 10 crypto currency exchanges. By June 2019 they plan to have 10,000 project kits installed in different homes. By September 2019, with the number of registered users, the platform will have access to quality information regarding energy consumption.

Smart City Coin Test Net already has a platform that is fully operational and has 800 active users who are demonstrating the actual use of the platform. This usability is uncommon within the crypto-money market and gives us confidence in what will eventually be developed as a project.

According to etherscan, the currency has already moved a total of 5,000,000,000 tokens, which is equal to 462,962 ETH at the price of 10,800 SCCTN = 1 ETH. This movement within the market shows that it is a currency with use within the world of crypto currencies. Few ICOs today have this movement and many end up with dead tokens that do not arouse any interest in the markets. This makes this Smart City data quite positive.

Lack of clarity regarding the project’s financial information

In the Light Paper of the project we could not find any information about the tokenomics (Tokens to be issued, tokens intended for the ICO, tokens for Airdrops, etc.) of this project nor data on the distribution of funds they hope to raise in the ICO, elements that are indispensable to know to determine the success of an investment. The financial part is an element that the project must pay special attention to, as they are data that every investor wants to know.

In spite of the fact that there are high level professionals in management positions with a lot of training, the project must specify who will be the technicians who will carry out all the practical aspect of the project.