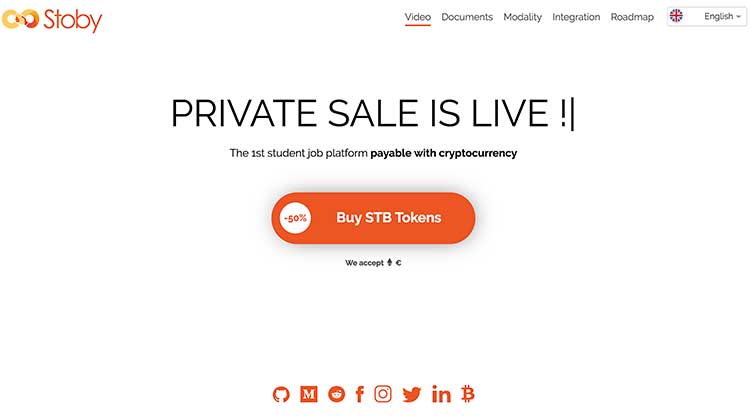 In this opportunity we have the ICO Stoby, a project that brings us our friend and advisor Quentin Hbrcht, a project that plans the creation of a platform where students are offered jobs and which main payment will be made in crypto coins, their specific token is offered as a means of payment. According to the developers, the platform will be the first online space aimed at finding small jobs for students so that they can enter into the working world and generate income that allows them to support themselves.

Stoby focuses on a specific and well-defined target, a market that is made up of students who have free time and wish to occupy it in carrying out productive tasks that more busy people or those with less time cannot carry out. With this, the developers explain, they are able to come up with two solutions, give income to the students and give free time to more busy people or teams that require the execution of diverse tasks.

This last principle is fundamental and is one of the points that most interest us since it refers to the application of Blockchain technology within the project, whose application is reflected in two elements, the first will be the Stoby Certification where the whole profile of the student/worker will be taken and the other refers to the Smart Contracts that will be implemented to regulate the working relationships between students and consumers. However, these points will be developed in depth in the next section, where we will talk about the application of Blockchain in this ICO.

Use of the Blockchain in Stoby

As mentioned above, on the Stoby platform there will be a Certificate for each student/worker reflecting their previous skills and experiences. The developers explain that in order to obtain this certification the students/workers must first approve 5 works within the platform, once achieved, they will obtain the certificate and consequently, as they obtain more works and accumulating experience, they will achieve that their certificate goes up in level.

Now, in order to offer security and confidence on the Certificate, the developers have established that it is managed in the Blockchain network, with the intention that the immutability that this technology offers makes impossible the falsification of the information captured in the Certificate.

This Certification will be available so that consumers who need workers can visualize the worker’s experience. These consumers can even check the authenticity of the Certificate within the platform itself and on the Ethereum Blockchain network that supports the system.

In addition to Certification, there will also be used Smart Contracts to ensure the performance and payment of each work agreed within the platform. The Contract specifies in a clear and detailed manner the task to be performed and the payment that will accrue for the performance of the same. If the task is performed as expected then the worker will receive the money as scheduled and everything in a completely transparent, safe and without the need for a trusted third party to act to insure the operation.

Within the platform, payments between users/employers and students/workers can be made in two ways, in euros and in STB tokens. However, if you decide to trade in STB tokens you will get certain benefits and advantages that will not be given if the payment is made in euros.

First of all, when paying with STB tokens the commissions charged within the Stoby platform will be lower, reaching up to 50% less than the normal price when paid in euros or FIAT currency. If the person interested in services publishes the work on the platform and indicates that it will be paid with tokens, their ad will appear better positioned than ads paid in FIAT currency, achieving more visibility for more students/workers to apply.

The developers plan to make the STB token useful in the student world. They want to create partnerships with companies, universities and colleges so that students can use these tokens in their daily student life by paying tuition, campus room rentals, buying supplies, and so on. This element has not yet been developed but it is proposed as the desired vision for the future of the project.

The company behind the ICO is called STOBY SAS and is located within the jurisdiction of France. It has a team of 10 developers and 7 advisors.

The CEO of this project is Julien Labatut, who will be in charge of carrying out Stoby’s entire strategy to ensure that the ICO becomes a successful project. He has experience in the business world working with companies in the export sector.

Bertrand Tisseire will be the CFO of the project and will be responsible for all financial matters. He has previous experience in the investment world having worked with investment funds.

Adrien Barbanson is in charge of everything related to the development of the Ethereum Intelligent Contract and is one of the members with the most experience in the world of Blockchain technology as part of different groups and international cryptomonedas projects.

Among the advisors of the project we will find Guillaume Duluc a business analyst very recognized within the world of Blockchain as an advisor of successful projects related to this technology.

Do they have a Minimum Viable Product (MVP)? Yes, the platform is already working but does not yet have the integration of the Blockchain system and the possibility of payment in Tokens.

According to the Road Map, this project will be completed by January 2021. In April 2019 they will integrate the payment in tokens within the platform and for the month of May they will include the Blockchain Certificates within it. The remaining time will be dedicated to take the platform to other countries such as Spain, United Kingdom, Italy and Germany.

Stoby is already a platform that has been operating for some time  within the French territory with some success, demonstrating that they already know how the market reacts and the public to whom they should direct the business plan. In addition to knowledge and experience, having an existing MVP makes the project implementation process much faster, requiring only small adaptations.

Seeing this situation presents a good scenario for investors since the project will have a start in a very short period of time, which would have a positive impact on the valuation of the token price.

The developers of this project have prepared a financial analysis in which studies and projections are demonstrated to evaluate what will be the future of the project and have done so in a very professional way. They have also studied the competition and considered both the pros and cons of their platform.

All these elements show that we are in front of a really prepared team with high levels of education and good organization, something not so common in the ICO market. Although a high level of preparation of the developers is not a guarantee that the project will be successful, but it does assure us that the project will have competent people for its development who will pursue to bring the project to a successful conclusion.

It is not the first ICO to propose a working platform in the Blockchain network, in fact, this is a branch with a lot of competition within the ICO market. Stoby will have to do relevant marketing strategies and customer search work to break into a saturated market and make the implementation and use of its model a success.

If, unfortunately, Stoby is not able to differentiate itself from the other platforms and becomes one more of the pile, and it will not lead to a positive valuation for this token due to the low demand and use of the currency in question.

Description: Stoby is already a platform that connects students who have free time to carry out tasks proposed by users who do not have time to complete them in exchange for remuneration. A proposal developed by a highly qualified team.

Undoubtedly Stoby has a differential attractive enough to impose itself on the rest of the platforms, the project shows preparation and dedication for the presentation of a working platform focused on a detailed market. The implementation of Blockchain technology is adequate and if they know how to make a difference, they will achieve an important space in the market.