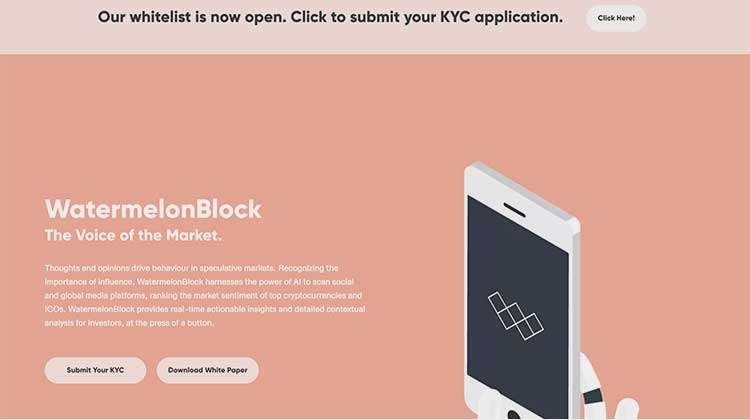 WatermelonBlock brings the possibility of obtaining a wider and more inclusive market analysis thanks to the use of Artificial Intelligence. What WatermelonBlock will do is to analyze and scan social networks and mass media in order to make a study of feelings or estimates about the market. These data can be used to measure the negative or positive feelings that a specific cryptomoneda or ICO may have, and then structure and classify them in the platform with an auto range called “Melon Score”.

The developers of WatermelonBlock have specified that the usefulness of this application is given before the democratization of the investment that represents the crypto currencies, what happens  now is that any person can invest in these assets but the problem is that not all those people know of the world of investments. With the application of WatermelonBlock we want to offer the possibility of providing accurate data so that anyone can invest more safely in a cryptomoney or ICO.

All this analysis is possible in real time thanks to the fact that the project uses the sophisticated AI platform called IBM Watson. Which has a computational power capable of analyzing a significant amount of data in a matter of seconds, which makes the analysis of market information possible and updated.

Artificial Intelligence and Analysis in WatermelonBlock

In addition to serving as an analyst, the developers are thinking of using Artificial Intelligence in the future to feed a trading Bot. This Bot will analyze the market in real time making trading decisions that can be beneficial for the user. All operations executed by the Bot will be performed with the WatermelonBlock token, so here we can already see the need to have the coin.

In addition to the above, the developers plan to create WatermelonAnalytics, a tool that will search, analyze and measure phrases, words, labels or links from web pages within social networks and the web space. In this way, companies or merchants will be able to give a usefulness to the application beyond the crypto currencies, being able to investigate about any commercial element that they have interest. In fact, this feature could be very useful for politicians, pollsters and societal scholars to measure people’s opinion of certain elements.

To ensure that the information being extracted is completely reliable, WatermelonBlock has created a series of proprietary data validation steps that ensure a more credible and accurate collection of data from the Internet. The exclusion of false positives ensures that the final result of the information will be reliable and useful in determining the genuine prospects that exist within the market.

Use of Blockchain in WatermelorBlock

The developers are carrying out this project in NEM’s Blockchain network because they consider that it has the most solid and scalable Blockchain architecture. The justification for using a Blockchain network comes from the fact that handling large amounts of market information requires much higher security.

Record credibility at the node level is of vital importance to WatermelonBlock as they seek to ensure that all data and transaction values provided to users are secure. The NEM consensus protocol ensures that the WatermelonBlock block chain can provide record security that can be adapted at any time.

Use of WatermelonBLock token within the process

The WatermelonBlock token (WMB) is a utility token that will be used to pay for products offered on the platform. However, the developers have developed a kind of “strategy” to engage the market.

When the application is released to the public, phase 1 of the project will have a series of services completely free of charge for the user. These services are real-time market analysis of crypto coins and ICOs, customized notifications for ICOs and selected crypto coins, and access to the application both on the mobile and on the computer.

In phase 2 of the project there will be a change, premiun options will be included within the application and to make use of them a subscription must be paid with the WatermelonBlock token. Premiun options include the Bot trading and analysis of greater weight on post and news that are published of crypto currencies.

In addition, the use of WatermelonAnalytics may only be used by users who have a minimum of 5000 WatermelonBlock tokens in the virtual wallet of the application. You won’t have to pay anything with those 5000 tokens, just own them and keep them there.

The price of each token has been set at 11.6 cents on the dollar and has as its maximum objective to collect 19 million dollars and at least 8.5 million dollars. In total there will be 400 million tokens and 240 million will be destined for sale.

According to the information on the website, the project is currently in the pre-sale stage. The minimum investment in pre-sale is 5 ETH and you get a 45% bonus on the price. They have not set a deadline for this stage so it is understood that it will last until the 39,613,750 WMB tokens that have been earmarked for this process are sold.

Behind the development of this project is the company WATERMELONBLOCK PTE LTD, registered in Singapore but actually operating in Australia. The team that makes up this project is composed of 19 people.

The CEO of the project is Elliot Rothfield, a UX designer who focuses a lot on the idea of creating communities and developing applications thought for the user. He has experience in the development of Star-ups and is the co-founder of an art community that has been running for over 10 years.

Another important member to highlight is Jason Lee, he is a consultant in NEM Blockchain application and is part of NEM’s board of directors. He has extensive experience in Fintech development as well as business and community development.

The technological development of this project will be in the hands of Daniel Shani, an engineer with experience in handling virtual clouds and high level computers. In addition, it is accredited by IBM as a business solution partner.

Do they own a Minimally Viable Product (MVP)?  On their website they indicate that they do have an MVP but it is only a video that shows how the platform works.

Use of Artificial Intelligence and Big Data

The implementation of Artificial Intelligence and Big Data technology is something that many companies and investors are looking for in today’s projects. Many believe that here is the future and the technology boom.

In this project we can see an application of these two technologies in a very interesting way and that can contribute positively in the market studies that have to be carried out in the cryptomedas. In addition, due to the massive use of social networks, this concept can easily be used by many other industries that also need to know the different opinions of the public.

The Proof of Burn implies a constant decrease of the circulating asset, which implies a direct revaluation of it in the middle of a market that will continue demanding it to make use of the services of WatermelonBlock.

However, this advantage should be handled with care by the project developers because if it is managed incorrectly, it could generate a scalability problem in the face of a shortage of tokens and jeopardize the use of the platform.

The minimum investment of 5 ETH makes this a project in which small investors will not be able to enter, being reserved only for medium and large investment capitals.

However, we do not yet know if this minimum investment will also be maintained during the next stages of the sale of the ICO. Both in the Whitepaper and on the official project website there is little clarity on this point.

They do not present a commercial planning

The project is ingenious, can be useful and well thought out but if that is not passed on to the market, it will not succeed. In this project we do not find a sales plan or a marketing strategy which are important to know how this project aims to attract consumers and businesses that offer the services they are planning to provide.

In spite of having a Marketing and Public Relations department, the investor wants to know the objectives that the ICO aspires to achieve in order to become a solid product within the market.