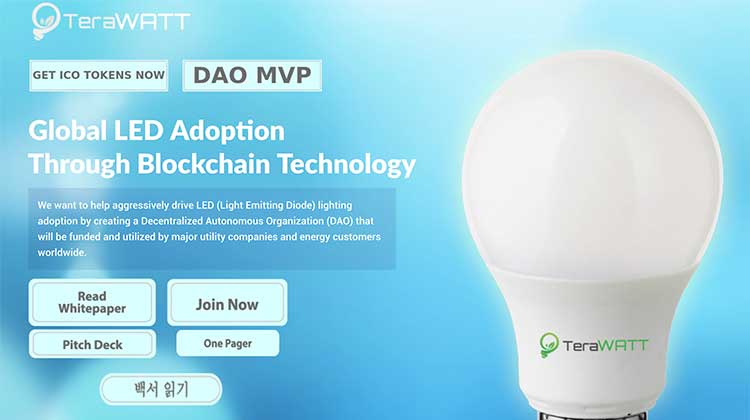 One of the most alarming problems that we have to deal with today in the modern world is the issue of environmental pollution and that is why in recent years there have been attempts to reduce electricity consumption to reduce the emission of carbon dioxide and the impact on the environment. Within that idea, researchers have determined that the use of LED bulbs use less electrical energy per lumen produced, making their use ideal for achieving the goal of energy savings.

However, LED bulbs have not had the worldwide adoption that was expected and that is why we need to give it a bigger boost. Terawatt wants to use Blockchain technology to promote the use of these bulbs everywhere.

What is Terawatt ICO?

Terawatt is an ICO planning to create a Decentralized Autonomous Organization (DAO) that will seek to drive the global adoption of LED lights. This DAO will function as a decentralized global monetary fund to finance the use of LED lights for businesses and the public sector.

The ultimate goal of the DAO is to reduce global electricity consumption by 50% by 2035. At the same time they expect to increase the lighting by 50 percent. To achieve this goal, the Terawatt DAO will be supported and used by power companies, LED bulb vendors, project token holders, and entrepreneurs interested in developing and powering this technology.

The funds of this DAO will be contributed initially by what is collected in the ICO. The developers state that they will later make agreements and alliances with international companies to integrate the new model and provide economic support. In addition to these revenues, the DAO fund will be fueled by other fees, services that will be charged within the entity, and business alliances that will be made with like-minded companies.

Members of the DAO will have the opportunity to choose which projects the funds will go to. The vote is weighted, meaning that each vote weighs according to the number of tokens that have been allocated within the DAO.  As explained in the Whitepaper, in principle these will be projects linked to LED technology but later there will be green energy projects such as solar energy, wind energy, electric vehicles, etc..

Use of Blockchain technology in Terawatt

First of all it is clear that Blockchain technology will be implemented to create the DAO network by means of token holders. The application of this technology allows the organization to remain transparent, secure, decentralized and reliable for all parties that make up the organization. In addition, within that network there will be Smart Contracts to ensure the participation of each of the members as well as to weigh their votes within the proposals that are presented.

The Blockchain network will also serve to store data from the Terawatt network, information that can be useful to measure the efficient reduction that is being made of electricity consumption. These data can also be useful for everything related to tax discounts that must be made with respect to energy savings. To access these data you must pay with tokens.

The token that is presented for the project is made according to the Ethereum network with the ERC-20 standard and as we have already mentioned before, it will be called LED. This token is a fundamental piece for everything related to access to the project’s CAD. As also explained above, voting power within the DAO will be directly linked to the number of tokens that have been allocated for the operation of the DAO.

The token will also function as an incentive for those who buy LED bulbs. According to the developers, they are preparing an interface that will allow users to verify their purchases to get tokens as a reward. This interface is still in the patent process and developers will provide more details when these procedures are completed.

They also hope in the future that the tokens may have “Masternodes”. These Master Nodes will receive voting benefits and rewards based on DAO earnings. However, for this system to be implemented it is necessary that the Ethereum network evolves and allows this option.

Finally, it must be added that the promoters of this project hope that the electric companies and businesses that work with the commercialization of LED bulbs accept these tokens as a method of payment. As explained by the developers, these traders will be interested in acquiring these tokens in order to have more weight within the CAD.

In this project 100 million tokens have been created and 65 million tokens are being offered for sale. The price that has been established in the ICO for the token is 40 cents of dollar and are accepting as payment method ETH and BTC. The minimum objective that is expected to be collected has been valued at 2 million dollars while the maximum is located at 11 million 460 thousand dollars. They’re asking for a minimum investment of 0.2 ETH for each investor.

This project is being developed within the Netherlands and the team behind it is composed of a total of 5 developers and 13 consultants.

The CEO of Terawatt will be Evan William, an entrepreneur who has been working with large U.S. and international companies for more than 12 years. He is currently leading an aviation project designed for the U.S. government.

Morris Hallowell Layton III will be the COO of this Project. He is a civil engineer with experience also in marketing, event promotion and business development.

In the group of advisors we can find Miikka Saloseutu, the founder of cryptocoinjudge and icotokennews, information portals of ICOs. It also has a marketing agency that focuses primarily on Internet marketing.

Based on the Roadmap, the project will conclude in January 2020. For the month of January 2019 they expect to have the Mobile Application of the project developed. In February of the same year they will test the DAO and the MasterNodes. By March the DAO will be fully operational and will be put online for all users.

In Terawatt’s Whitepaper we can point out that there is a plan to burn coins in order to cut the total number of tokens circulating in the market. According to the plan, developers will burn coins continuously until the 65 million circulating tokens are converted into 1 million tokens.

These burn plans together with an optimal marketing plan that efficiently promotes the use of the token generate that the demand for tokens remains on the rise while supply decreases. According to economic logic, this strategy positively influences the valuation of the token price.

Unique offer in the market

Terawatt presents an idea that no other ICO or traditional market company is driving. Focusing the way Terawatt is doing within the so-called Green Industry can be highly positive. Considering the importance and impact of environmental issues within the economy and society, this CAD may have some popularity.

While this is a unique idea, the market you hope to reach is a little limited. LED lights are not being massively adopted all over the world, especially in underdeveloped countries where energy problems are different.

This circumstance implies that the project would have an initial application limited to the most developed countries. Although it is true that these markets are the most important in economic terms, it could be an obstacle to overcome if we want to achieve the growth of the project and its global adoption.